The armadillo is one of the strangest little creatures found in the Americas. Its name in Spanish translates to “little armored one,” and refers to its armored shell made up of dermal bone. In total, there exist 21 known species of armadillo, all of which live in North America and South America. Most species live in temperate, warmer habitats ranging from rain forests to grasslands to deserts. They range in size from around 5 to 6 inches long to nearly 59 inches long. One species, Tolypeutes, exhibits a unique behavior in that it can roll into a ball when threatened. Armadillos feature prominently in American literature, arts, and culinary traditions. Additionally, they have been used extensively in scientific research. This is due to the fact that they are one of the few animals known to contract leprosy. Still, do you know the answer to the question, “what do armadillos eat?”

Armadillos are omnivores, meaning that they eat both plant and animal matter. That being said, insects make up the bulk of their diet and may constitute nearly 90% of what they eat. However, there exists a lot of variance in the dietary habits between different armadillo species. While some armadillos eat a wide variety of food, others are specialist hunters, preferring to dine on just a few different prey animals. Although they prefer live prey, armadillos are not opposed to eating carrion as well. As opportunistic eaters who eat both plants and animals, an armadillo will end up eating just about anything. For the purposes of this article, we’ve identified 10 foods that most armadillos like to eat. This is not to say that all armadillos eat these foods, simply that they occur frequently in an armadillo’s diet. The 10 foods that armadillos like to eat include:

How Do Armadillos Hunt and Forage For Food?

When hunting and foraging, armadillos rely on their senses to help them find food. That said, they use some senses more than others. For example, armadillos possess very poor eyesight. This makes sense, given that most armadillos are nocturnal. As a result, they mostly rely on their keen sense of smell to find food. While hunting for food, they can smell prey and other morsels located nearly 8 inches below the ground. Meanwhile, they also have strong hearing abilities, although they mostly rely on their hearing to avoid predators. Additionally, armadillos are equipped with long hairs on their undersides. These long hairs act like the whiskers on a cat and are very sensitive to touch. They allow an armadillo to closely feel the environment they are walking on. This helps them to detect food, and also to locate suitable areas for them to dig.

Armadillos mostly find food by digging through dirt and soil. They are prolific diggers, and use their sharp claws to sift through the ground to find food. An armadillo can dig out a burrow in about 15 minutes, so it can quickly find food located a few inches below ground. They possess 5 claws on their hind feet, and between 3 to 5 claws on their forefeet. The claws on their forefeet are thicker and heavier, which makes them perfect for digging. Unlike most other mammals, armadillos do not have canine or incisor teeth. Instead, they continuously grow peg-like teeth, of which they possess between 14 to 18 per jaw. When not sleeping, armadillos are usually hunting or foraging. They do the majority of their hunting at dusk and dawn when insects are usually most active.

What Do Armadillos Eat in the Wild?

In the wild, armadillos will eat just about anything that they can catch or find. As opportunistic eaters, they aren’t particularly picky, although certain species do show preferences towards particular foods. For example, while most armadillos eat insects, grubs, and invertebrates, some specifically target ants and termites. Other insects that armadillos eat include cockroaches, grasshoppers, beetles, and wasps. Additionally, they will also eat spiders, scorpions, and snails. Along with insects and invertebrates, wild armadillos will also target bird and reptile eggs. On occasion, they will even eat small reptiles and amphibians such as snakes and frogs. As for plants, armadillos eat a wide variety of plants including mushrooms, fruits, vegetables, and seeds. In total, armadillos have been reported eating over 500 different foods. When available, they will also eat carrion, although they tend to prefer live prey. That said, they’ll never turn down an easy meal.

What Do Captive Armadillos Eat?

Armadillos do not make good pets and it is illegal to own an armadillo as a pet in many places. However, they are still commonly kept in zoos, where people enjoy watching these unique creatures in synthetic habitats. Most zoos feed captive armadillos a predominantly insectivorous diet. This diet includes a number of different insects including grasshoppers, ants, termites, beetles, and grubs. Along with insects, many zoos also feed their captive armadillos a limited amount of fruit. However, depending on the species, some armadillos may require a more specific diet. For example, giant armadillos, southern three-banded armadillo, and pink fairy armadillos mostly eat ants and termites. These animals require a large number of insects to stay well fed. Just one giant armadillo can eat up to 200,000 ants in a single day. Such a large number of insects means that caring for these giant creatures can be difficult.

What Do Baby Armadillos Eat?

Most armadillos live between 7 and 20 years in the wild, but they can live longer in captivity. Baby armadillos are called pups. A female armadillo can give birth to anywhere from 1 to 12 pups at a time, depending on the species. Meanwhile, the nine-banded armadillo almost always gives birth to identical quadruplets. At birth, the pups possess soft, leathery shells rather than hard shells. On average, the mother will nurse the pups for between 2 to 4 months, but this can vary depending on the species. Once the pup is old enough, it will begin to eat the same food as an adult armadillo. By around 9 to 12 months old, armadillos are fully mature and venture out on their own. 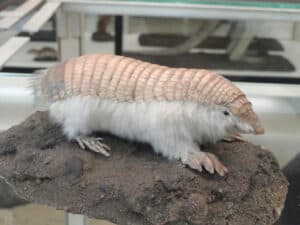