Click through all of our Arizona Bark Scorpion images in the gallery. 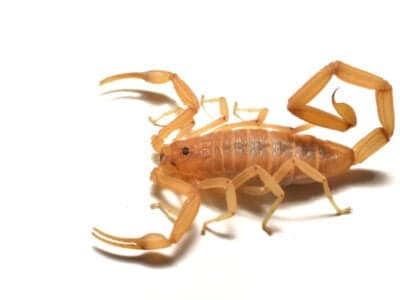 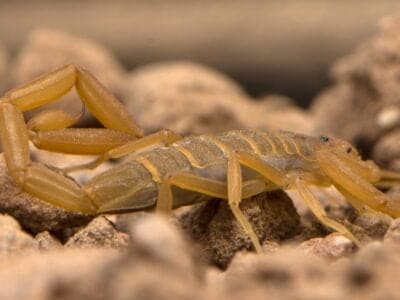 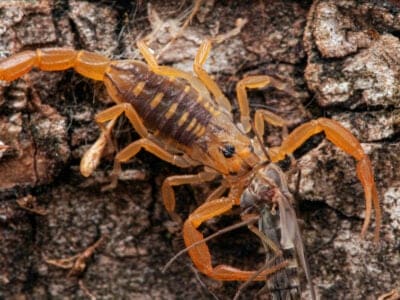 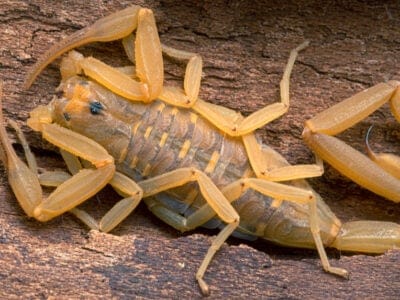 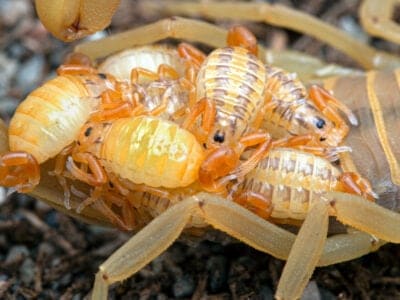 View all of the Arizona Bark Scorpion images!

The Arizona bark scorpion is a small but potentially deadly arachnid native to the Sonoran Desert of the United States and southwestern Mexico. Adult males only grow to about 3.14 inches and females up to seven inches. These resilient creatures live up to seven years on average with some known to live as long as nine years. During nuclear testing by the United States, bark scorpions found at ground zero showed no negative side effects from exposure.

The Arizona bark scorpion (Centruroides sculpturatus) is one of the most feared creatures in the American southwest because it is small but deadly. The scorpion’s sting is highly toxic and painful to most creatures except grasshopper mice. Alongside about 69 other species, it belongs to the Buthidae family and the genus Centruroides.

Some of the 69 types of bark scorpions in the same genus include striped bark scorpions (Centruroides vittatus). These are found mostly in the southcentral and southwestern United States including Arizona, Arkansas, Colorado, Louisiana, Montana, Nevada, New Mexico, Oklahoma, Texas, Utah and Wyoming. Although they look much like an Arizona bark scorpion, the striped bark species has two distinct brown stripes running the length of their back that make them easy to identify. They do not have a deadly sting.

In their arid habitat, Arizona bark scorpions have a suspected biomass that exceeds all other vertebrates in their region. Scientists believe this high biomass contributes to the scorpions’ tendency toward cannibalism.

The Arizona bark scorpion is brown with two body segments, the cephalothorax and abdomen. It has eight legs and two pedipalps that look like miniature crab or lobster claws. These pedipalps are used to sense the environment and grab prey. The tail that curls up over the body has five segments with a stinger at the end. Males measure up to eight centimeteres long and females typically grow to seven centimeters with both sexes’ average weight at around two ounces.

When the Arizona bark scorpion stings a human, it is believed that its deadly venom travels through the victim’s body by way of the lymphatic system. Once stung, the victim suffers pain immediately at the sting site. Within four hours, the symptoms set in and can prove deadly. Emergency treatment is necessary after a sting. In sting victims given Arizona bark scorpion antivenom, symptoms were relieved within 30 minutes for 71% of patients. Goats are used by scientists to make antivenom for human treatment.

Arizona bark scorpions are native to the Sonoran Desert of Arizona, also living in Baja California and Chihuahua. Their range extends from southern Arizona into southern California, western New Mexico and northern Mexico. They thrive in warm climates and hibernate in winter.

The scorpions are easy to find throughout the Grand Canyon and even on the canyon walls. Its common name comes from the creature’s ability to climb high into trees or on rock walls. But it also lives on and beneath the ground level, under rocks and in crevices. In people’s homes they are found on walls, in dark spaces like closets, at the base of toilets, in shoes or trapped in sinks and bathtubs.

Centruroides sculpturatus lives, travels and hibernates for the winter in groups of up to 40 individuals. A sighting of one of these scorpions means many more are likely nearby, usually hidden from view. Female scorpions can have 30 or more young at once. These scorplings live on the mother’s back until they molt the first time, sometime between one and three weeks.

Arizona bark scorpions are true predators. Thanks to their highly venomous stinger and pedipalps, they are well armed to grab and immobilize their prey within milliseconds. Still, many animals consider these threatening creatures tasty prey.

Surprisingly, many animals are willing to risk the Arizona bark scorpion’s sting to make them a tasty meal. One such animal even has interesting adaptations to make eating the scorpion easier. Among their predators are bats, large centipedes, tarantulas, lizards, owls and other birds, shrews and grasshopper mice.

Grasshopper mice have adaptations for hunting these scorpions. They have evolved for resistance to their prey’s venom. This is one of the most interesting facts of the animal world. Instead of being poisoned by the scorpion’s sting, grasshopper mice internally process the venom into a painkiller. As Centruroides sculpturatus’ venom has evolved in strength, so has the grasshopper mouse’s adaptations for resisting the venom.

What do Arizona bark scorpions eat?

The preferred meals of Centruroides sculpturatus include centipedes, spiders, crickets, roaches and other scorpions, as well as any other insects they find. They have poor eyesight but hunt at night using tiny hairs on their body to sense vibrations and movement. Because they can run up to 12 miles per hour, the scorpion can easily target, chase and grab prey using their pedipalps. They quickly deliver a deadly sting to kill the insect or other creature then eat them. Bark scorpions can go several days without eating and will cannibalize their own kind if needed.

Prevention: How to Get Rid of Bark Scorpions

Arizona bark scorpions are a big problem for many homeowners. Important facts are these mighty little stingers can be deadly to cats, dogs, the elderly, children and adults with compromised immune systems.

Symptoms of a sting include convulsions, breathing problems, muscle twitching, frothing at the mouth, numbness and even death. If a person is stung on their arm or leg, that limb can stay numb for 72 hours or more. Most deaths occur in people with allergic reactions to the venom.

Antivenom used to treat the sting is usually processed from goats and can cause negative side effects of its own, called “serum sickness.” For these reasons and the dangers they present, Arizona bark scorpions are pests most homeowners do not want within their walls.

Homeowners and pest control experts take many steps to prevent Arizona bark scorpion entry into homes and invasion of lawns. These include placement of smooth physical barriers designed to prevent the climbers from entering related areas, since they cannot climb smooth surfaces. Other methods include placement of glue boards around perimeters and places where they are frequently seen. Pesticides are used to kill existing scorpions and prevent more from coming inside or around specific areas of the outdoors. Because scorpions like to hide in dark, moist and cool areas, it is helpful to remove wood piles and other congregation areas around the home that may be attractive to them.

Arizona bark scorpions are the only potentially deadly scorpion in the United States. They have a painful and highly venomous sting that is particularly dangerous to young children, pets, the elderly, and people with compromised immune systems. Most people who die from the sting are allergic to venom.

How many legs does a bark scorpion have?

Like other arachnids in the class Arachnida, Arizona bark scorpions have eight legs. They also have two front pedipalps that look like tiny crab or lobster claws and a five-segmented tail with a stinger at its end.

How do you get rid of bark scorpions?

You can prevent these scorpions from invading your home or lawn by removing debris where they can hide, such as wood piles. Seal cracks in the building like those around baseboards. Once they have come into your home, you can use pesticides or have a professional exterminator do this for you.

How do I identify an Arizona bark scorpion?

An Arizona bark scorpion is a solid light brown, not striped like its cousin, the striped bark scorpion. It has two body segments, eight legs, two front pedipalps, and a five-segmented tail with a stinger at the end that raises up above its body when threatened. Females typically measure about 7cm long and males measure 8cm.

What is an Arizona bark scorpion?

Arizona bark scorpions are arthropods in the class Arachnida. It is a type of insect most closely related to spiders and other scorpions. But this one is the most venomous scorpion in the United States, the only one with a potentially deadly sting. It lives in Arizona, New Mexico, California, and Mexico.

What does an Arizona bark scorpion eat?

What do I do if I'm stung by an Arizona bark scorpion?

If you are stung by this scorpion, it is important to call for emergency medical service or go to the emergency department of your nearest hospital. Its venom can cause serious allergic reactions in some people. In those cases, goat-produced antivenom can provide lifesaving treatment.

Arizona bark scorpions are the only type of scorpion in the United States that can kill people. These deaths are rare but happen from time to time. For most people, the sting causes severe pain at the injury site and other symptoms like numbness.

Are Arizona bark scorpions the most poisonous scorpions?

These scorpions are the most poisonous scorpions in the United States. No other American scorpion can cause the death of a human being.

How big does an Arizona bark scorpion get?

Most male Arizona bark scorpions grow to about 8cm. Females grow to seven cm on average. However, these scorpions are sometimes spotted at lengths of up to nine cm.