The male Gouldian finch bobs its head and fluffs its feathers to court a female. Colour
Lifespan
8 years in captivity
Weight
14g
Height
5in
Length
5.5in – 6in

Click through all of our Gouldian Finch images in the gallery. 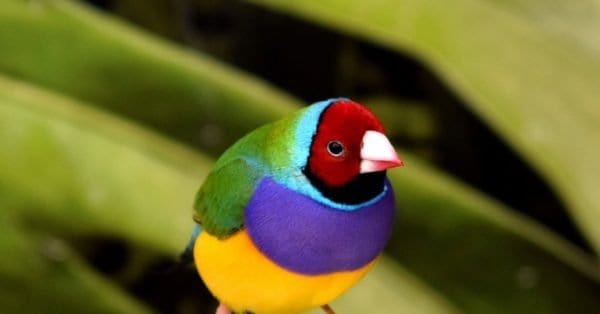 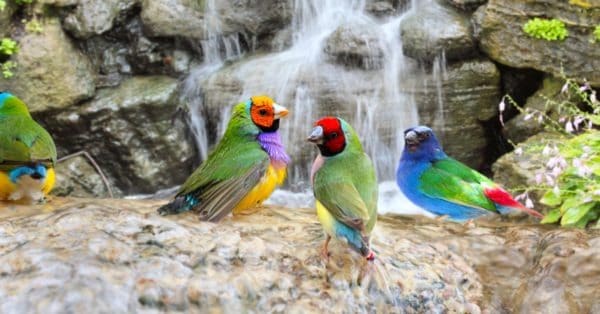 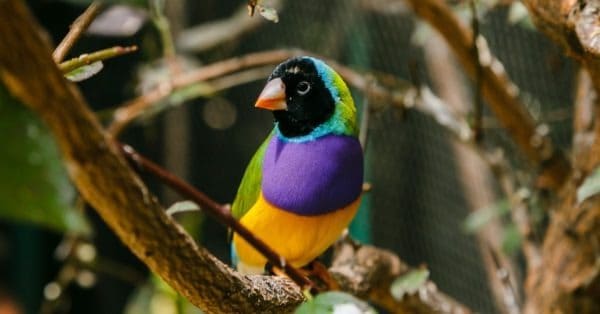 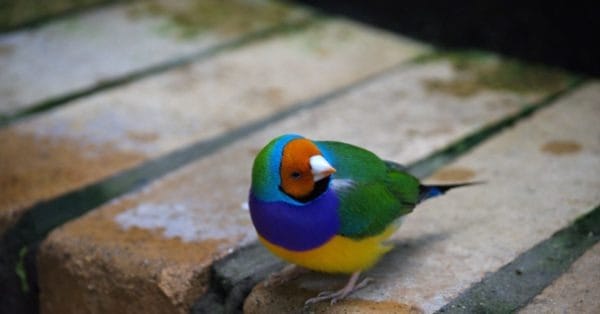 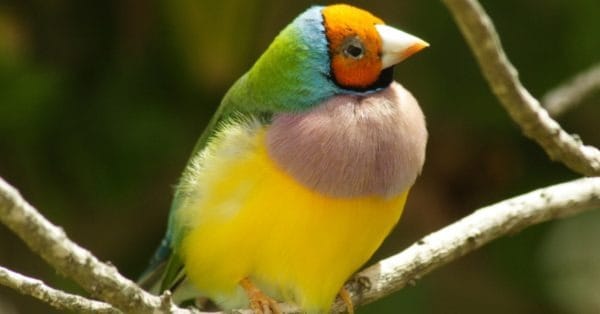 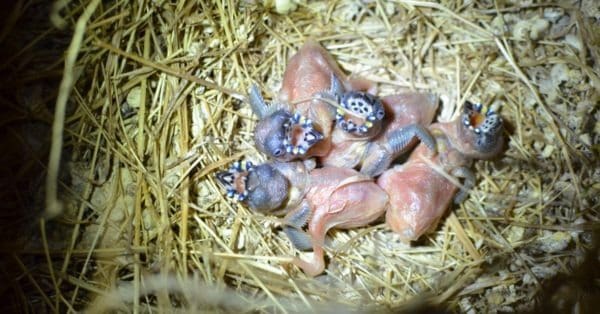 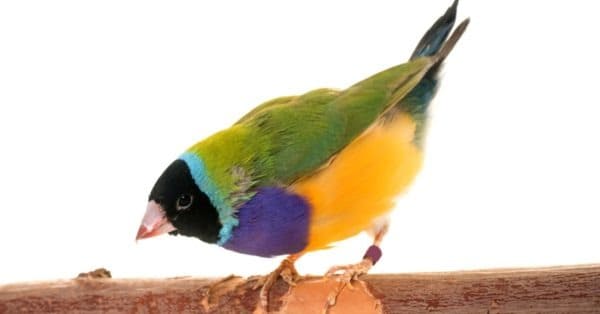 View all of the Gouldian Finch images!

With one of the most striking plumages in the entire animal kingdom, the Gouldian finch almost looks like it was put together in patches.

The head, breast, abdomen, and back all exhibit an elegant rainbow of different colors. It’s no surprise that this species is highly sought after in the pet trade. After decades of decline, however, the Gouldian finch is now facing the prospects of an uncertain future.

Where to Find the Gouldian Finch

The Gouldian finch is a bird that was once found across much of northern Australia. Now it only occurs in a few places around the Northern Territory, the Kimberley region of Western Australia, and sometimes as far east as Queensland. It prefers to live in open grasslands and plains with a nearby source of water and enough smooth-barked Eucalyptus trees in which to live. The species requires a precise mixture of grass species on which it feeds.

The scientific name of the Gouldian finch is Erythrura gouldiae. Gouldiae is simply the Latinized name of the British ornithologist John Gould, who first categorized this finch and named it after his wife (hence the alternate name Lady Gouldian finch). The Lady Gouldian finch is sometimes placed in the genus of Erythrura with other parrotfinches or its own separate genus, Chloebia. It also belongs to the family of tropical Asian and Australian finches known as Estrildidae.

The Gouldian finch exhibits a true rainbow of colors. Most birds have a red, yellow, or black “cowl” on the head, a turquoise or light green band around the shoulders, purple back and wings, and a yellow abdomen fading to white. That is in addition to several unique mutations, including a silver color. The main difference between the sexes is that the males exhibit brighter purple feathers, while the females have a paler purple breast. The male is also the only one that explicitly sings, but both sexes can produce chirps, hisses, clicking, and trills to communicate with each other. This bird measures around 5.5 inches in length and wingspan.

The Gouldian finch is a social species that gather in large flocks of hundreds outside of the breeding season. These mixed flocks also contain long-tailed finches and masked finches, both of which are members of the same taxonomical family. During the day, when the bird is most active, the dense foliage of the Eucalyptus tree provides protection from the hammering rays of the sun. They may also come down to the ground to forage.

The Gouldian finch is not migratory, per se, but these nomadic birds do wander from place to place in search of better food and water sources when one location becomes sparse and dry.

Like many other species of finch, the bird’s stout and strong beak is well-adapted for cracking open and eating seeds. They eat up to 35% of their body weight every single day.

What does the Gouldian finch eat?

The diet of the Gouldian finch consists of several different kinds of grass seeds throughout the year based on availability. Its favorite foods appear to be ripe or half-ripe sorghum seeds, which occur during the wet season, but during the dry season, it also forages on the ground for any grass seeds it can find.

Over the last few centuries, the Gouldian finch has faced numerous threats from habitat loss (especially from rampant fires), predators, herbivorous competitors, diseases, and parasites (such as mites). This species paid a heavy price for its striking colors, which make them a conspicuous and noticeable target for trappers and predators alike. Large numbers of them were trapped by humans for private use. Australia banned trapping and exportation in the 1980s, though the species continues to be bred in captivity. The IUCN Red List currently considers them to be near threatened. The Australian government lists them as endangered.

What eats the Gouldian finch?

The Gouldian finch is usually preyed upon by feral cats, hawks, and snakes. The bird is most likely to fall victim to predators within the first several weeks of life before it has become fully independent.

As the breeding season approaches, usually between December and April, the male finch puts on a brilliant courtship display by expanding his chest, fluffing out his feathers, and bobbing his head up and down. The female reciprocates his advances by wiping her beak.

After they pair up, the female produces one egg per day until she’s laid between four and eight of them. Both parents play a vital role in incubating the eggs and raising the young. After about two weeks of incubation, the chicks hatch from the eggs with no feathers and blue nodules at the corner of the beaks to help the parents find their mouths in the dark.

Although completely dependent on their parents for food and protection, these chicks will gain their full flight feathers after about three to four weeks of life. At this stage, both males and females sport a duller green-gray plumage color. Only after they grow their full adult feathers between eight months and a year old will their sex become obvious, right around the time they reach sexual maturity and begin breeding. These birds live up to eight years in captivity, though many wild birds do not survive their adolescence and have a shorter lifespan.

Millions of these finches once roamed across Australia. Now only 2,500 mature individuals remain in the wild, although population numbers appear to be stable. These finches rely on healthy and mature trees, so conservationists have focused their efforts on fire management and habitat maintenance.

Does the Gouldian finch migrate?

No, but flocks of these bids do wander around northern Australia in search of better feeding and watering opportunities.

How many eggs does the Gouldian finch lay?

The Gouldian finch lays four to eight eggs per clutch.

How fast does the Gouldian finch fly?

It is not known how fast the Gouldian finch can fly.

What is the Gouldian finch’s wingspan?

This species only has a wingspan of around 5.5 inches.

When do the Gouldian finches leave the nest?

The Gouldian finch baby will first leave the nest around three to four weeks after hatching, but it doesn’t become completely independent until around 40 days.

Where does the Gouldian finch live?

How long does it take for a Gouldian finch baby to hatch?

The Gouldian finch is highly sought after as a pet due to its brilliant plumage, charming personality, and relatively low care requirements. Many people find them to be cheerful and pleasing companions. The price of a normal Gouldian finch is usually not that high, although the price may rise for rare mutations.

The Gouldian finch makes all kinds of pleasing trill and chirping sounds without ever being excessively noisy.

How long does a Gouldian finch live?

The Gouldian finch usually lives about five years in the wild, but it could potentially live up to eight years if properly treated and cared for.

What is another name for the Gouldian Finch?

The Gouldian Finch is also called the Lady Gouldian finch, Gould’s finch, or the rainbow finch.

What is another name for the Gouldian Finch?

The Gouldian Finch is also called the Lady Gouldian finch, Gould’s finch, or the rainbow finch.

What are some distinguishing features of the Gouldian Finch?

The Gouldian Finch has a brightly colored plumage.

How many Gouldian Finches are left in the world?

What is an interesting fact about the Gouldian Finch?

The male Gouldian Finch bobs its head and fluffs its feathers to court a female.