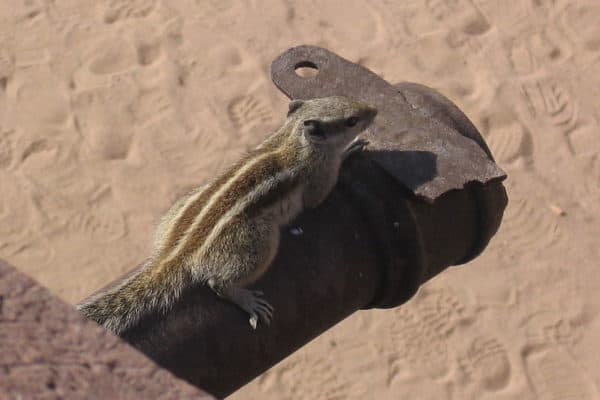 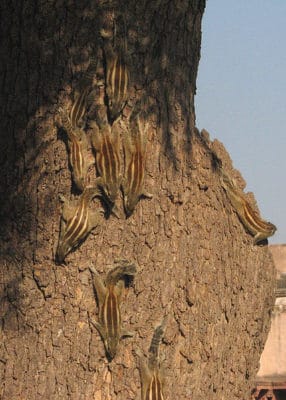 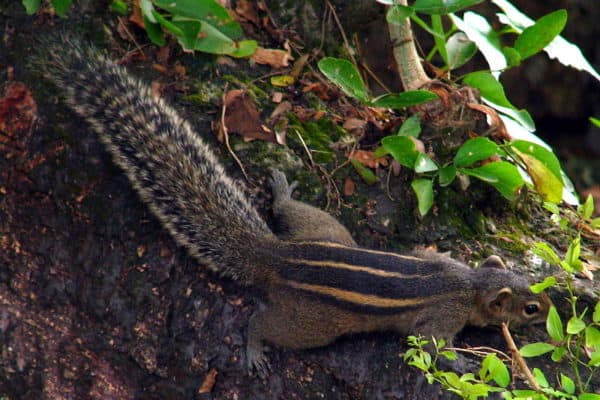 Considered sacred in India, this Indian squirrel species has become an invasive threat in countries like Australia

It’s not just cows that are considered sacred in India. In Hindu texts, a powerful deity named Lord Rama was building a bridge over the sea to help him find his kidnapped wife when a squirrel helped by moving tiny pebbles to the construction area. When Rama thanked the squirrel by petting its back, his fingers left stripes.

Today, Indian palm squirrels are considered sacred to many Indians thanks to that story. However, it’s also become an invasive species that threatens new habitats far from India’s borders.

• The Indian Palm Squirrel escaped from the Perth Zoo in Australia and rapidly began expanding across the city’s suburbs. While its population in Australia peaked at over 1,000, its believed that fewer than 10 survive as an invasive species in Australia today.

• The Indian Palm squirrel is different from other squirrels because it doesn’t hibernate.

• The species is known for the distinctive three stripes across its back. However, it’s far from the only squirrel species in India with unique markings. For example, the Indian giant squirrel is known to have a “rainbow coat!”

The squirrel’s scientific name is Funambulus palmarum. Funambulus is Latin for tightrope walker, which describes the squirrel’s agility. Palmarum means that it is of the palm trees. Another name for the squirrel is the three-striped palm squirrel. Because of its stripes, the Indian Palm Squirrel looks very much like a large chipmunk, but chipmunks belong to an entirely different genus.

The squirrel is about 6 to 7.8 inches long, and its body is just a bit longer than its bushy tail. It has a gray-brown back with the diagnostic three stripes. Interestingly, these stripes can even be seen on newborn squirrels even before they grow fur.

Young squirrels are lighter in color than adults, and sometimes albino squirrels are born. These are squirrels that lack the pigment that give other squirrels their color, so their fur is white, and their eyes are red.

The middle of the three stripes runs from the squirrel’s head to its tail, but the outer stripes begin at the squirrel's front legs and stop at their hind legs. The belly is cream colored, and the tail has long, black and white fur. The texture of the fur overall is soft and silken. The Indian Palm Squirrel has tiny, triangular ears and large dark eyes found on the sides of its head. This gives the squirrel nearly 360 degree vision and helps it avoid predators.

An average Indian Palm Squirrel weighs about 3.5 to 4.2 ounces (100 to 120 grams) and is surprisingly fast for its size. It can run about 10 miles per hour (16 km/hr). They not only have whiskers on their faces, like cats, but have them on their legs. These whiskers give the squirrel a superb sense of touch.

The Indian Palm Squirrel has four toes on each of their paws, including a rudimentary thumb. The paws have claws that help the squirrel climb, and the ankles on its back legs can rotate 180 degrees. This helps it go down a tree or telephone pole head first because their back paws are able to firmly grip the wood.

A squirrel is a type of rodent, so its teeth keep growing. Gnawing on its food keeps its teeth, especially two pairs of long front teeth called incisors, a reasonable size and keeps them healthy. The typical arrangement of teeth is two pairs of incisors that gnaw their food, and cheek teeth that grind their food. There’s a big gap between the incisors and cheek teeth called the diastema.

The Indian Palm Squirrel is native to the warm, humid areas of the southern Indian subcontinent. It nests at the top of the trees found there, and not just palm trees. The nest of a squirrel is called a dray and is woven from grass. Instead of hibernating during the winter, the Indian Palm Squirrel just stays in its nest until the day grows warm enough for it to emerge. If it must, the squirrel will even live in a house.

The squirrel is an omnivore. This means it will eat just about anything though it prefers fruit and nuts. In India, palm squirrels prefer crops such as nuts, sugarcane, grapes, mangoes, and apples. In addition, Indian palm squirrels won’t hesitate to eat crops as well as eggs and even chicks found on poultry farms. This makes them especially dangerous as an invasive species. On the other hand, it eats insects such as caterpillars that also damage crops.

In its natural habitat, the Indian Palm Squirrel will eat other, smaller mammals such as mice, small reptiles, insects and birds as well as fruit, nuts, eggs and seeds. Like humans, the squirrel can’t digest cellulose.

Because the squirrel is revered in India, people also feed it. As a result, some Indian Palm Squirrels have become quite tame and come to expect handouts from human friends.

Like many other types of squirrels, the Indian Palm Squirrel is fairly aggressive when it comes to protecting its cache of food and will see off any other animal that tries to pilfer it. It’s a busy and noisy animal and gives off a distinctive chipping alarm call when it senses danger.

Because it is small, Indian palm squirrels are a favored prey for any sort of carnivore, including mammals like wild cats, birds such as hawks or eagles and reptiles such as snakes. Outside of India, humans do hunt and kill Indian Palm Squirrels, especially in those regions where they have become invasive. In Western Australia after Indian palm squirrels escaped from the Perth Zoo, an exclusion zone was set up around the Perth area to prevent the spread of Indian palm squirrels. However, after they continued escaping, a pest control program was put in place to limit their numbers.

Indian Palm Squirrels are solitary, and they only come together to mate in the fall. They chase each other, and the males have a mating call. The male's sense of smell can tell him if the female is ready to mate.

Only the mother cares for the babies. She gives birth after a pregnancy of 34 days to two or three babies. They are born blind and hairless. They are weaned after 10 weeks and are ready to reproduce when they are nine months old. A male squirrel is a buck, the female is a doe, and the baby is a pup, kitten, or kit.

Biologists don’t really know how many Indian Palm Squirrels live in the wild, but it is a very abundant animal, and its population trend is moving upward. The species is classified as “Least Concern.” However, in environments where the squirrel has been introduced to

What other Indian squirrels are there beyond the Indian palm squirrel?