Only found in one area of Brazil!

Click through all of our Pied Tamarin images in the gallery. 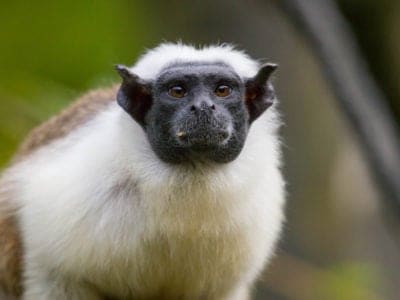 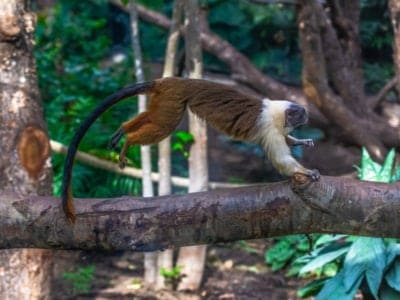 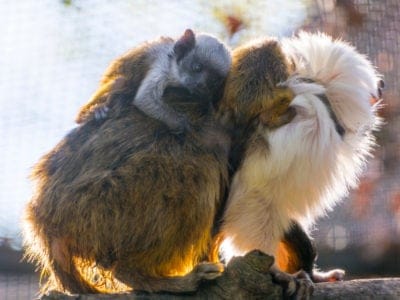 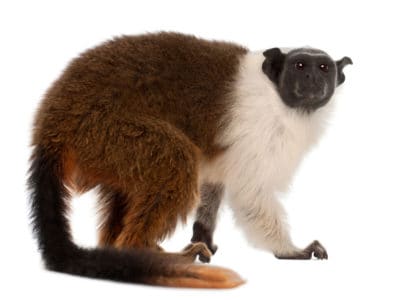 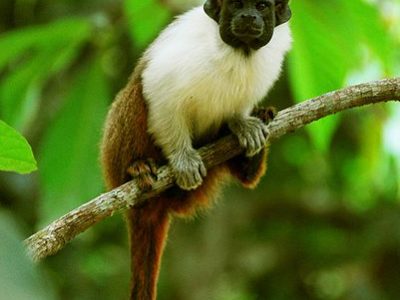 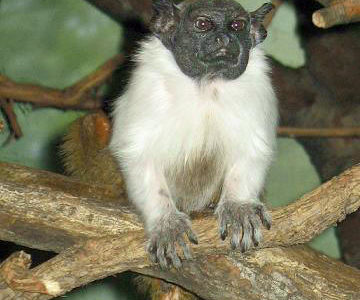 View all of the Pied Tamarin images!

“One of the 25 Most Endangered Primates”

Primates in Peril list pied tamarins as one of the 25 most endangered primates. Furthermore, according to the International Union for the Conservation of Nature, the species’ population has dropped more than 80 percent over three generations, making these tamarins Critically Endangered.

Urban sprawl and rural expansion are exceptionally destructive to the species, and many conservation groups are working to ensure tamarin survival.

Saguinus bicolor is the scientific name for these tamarins. Saguinus is a portmanteau of the Portuguese word “sagui,” which translates to “small monkey,” and the Latin suffix “inus,” meaning “of or pertaining to.” Bicolor refers to the animal’s dual-toned fur.

Colloquially, pied means “having two or more colors,” and tamarin describes species in the marmoset — the small monkey — family. Most have distinctive fur tufts around the shoulders and neck — in addition to hairy faces. However, pied tamarins stand apart from the marmoset pack with their hairless mugs.

At 7 to 11 inches and only weighing about 430 grams — just short of a pound — these tamarins are small compared to other primates. However, they’re one of the larger tamarin species — and have proportionally large claws!

Pied tamarins’ necks and shoulders are wreathed in shaggy white fur. But, from the waist down, they don almond-colored coats.

Speaking of eyes, females of the species can see more colors than males because the former enjoy trichromatic vision and the latter only dichromatic.

As for the rest of their features, these tamarins sport flat noses with sideways nostrils and have 32 teeth. Plus, instead of fingernails, claws extended from pied tamarins’ toes — except on the big toe.

These tamarins are social animals that live in small cooperative groups of up to 15 individuals, but most have between five and seven members.

A matriarchal, polyandrous species, pied tamarin clusters are led by alpha females who are the only lady members of the tribe to mate and give birth. Other females in the group exhibit reproductive instincts, but they self-suppress urges.

Pied tamarins are highly territorial animals that use body language and high-pitched vocalizations to alert friends and scare enemies. A journalist embedded with researchers in the Amazon once described the monkey’s chatter as sounding like a “boiling teapot doing morse code.”

Additionally, like most primates, these tamarins use a multi-faceted communication system involving scent markings, body language, and a series of whistles and chirps. Grooming is central to their lives and plays a major role in maintaining social balance.

Pied tamarins only live in one Brazilian region in and around Manaus, Amazonas. The real-life Wakanda of South America, Manaus is a booming, high-tech city smack in the middle of the Amazon Rainforest.

The rivers Amazon, Cuieiras, Negro, and Urubu outline the species’ historical region. The species can be found 27 miles north of Manaus and up to 62 miles east.

These tamarins are omnivores that enjoy figs, flowers, fruits, insects, spiders, frogs, lizards, and bird eggs. However, they prefer to feast on plants and fruits.

Scientists who work with these tamarins in captivity have had difficulties developing ideal diets for their subjects. As a result, many of the small monkeys living in zoos and labs struggle with breeding and reproduction. However, the more we learn about nutrition, the more progress researchers are making.

Small wild cats, birds of prey, and snakes are the tamarins’ natural predators. Dogs and cats introduced to the region by humans also attack the small primates.

Food competition is another major headache for pied tamarins. Red-handed and golden-handed tamarins also occupy the same area, eat the same foods, and may be displacing pied tamarins.

But ultimately, habitat destruction is the species’ main threat. Manaus, the city in pied tamarins’ historical region, is expanding, as are surrounding farmlands — and the concomitant road-building and field clearing are destroying the monkey’s natural homes. Electrocution is also on the rise.

Only alpha females reproduce in these tamarin groups, and they mate with several males. Gestation lasts between 140 and 170 days, 80 percent of births produce twins, and dad does most of the infant care. Mothers step in when the baby needs to nurse, but the father and other group members handle the rest.

Baby tamarins aren’t independent and cling to their parents for about 21 days. Newborns mostly stick to their fathers, except when it’s time to eat, and they’re handed off to mom. Additionally, other members of the traveling pack will take turns carrying and caring for babies.

When infants reach a month old, they start exploring a bit on their own but still spend six to seven weeks strapped to someone else.

In the wild, these tamarins typically live 10 years. In captivity, many survive to about 19.

Even though conservationists don’t have a firm count on the number of remaining pied tamarins, experts consider the animal Critically Endangered because their population has decreased by at least 80 percent over the past three generations.

Primatologists now mostly agree that these tamarins have three subspecies: S.b. bicolour, S.b. ochraceus, and S.b. martinsi. They all have slightly different coloring but live in the same region.

Currently, 170 tamarins live in zoos worldwide. In the United States:

This is not an exhaustive list. To find a zoo near you with these tamarins, turn to a search engine.

Pied tamarins eat everything from figs to lizards, making them omnivores. However, the bare-faced monkeys prefer plants, fruits, and veggies over meat.

What Is the Scientific Name for the Pied Tamarin?

The scientific name for pied tamarin is Saguinus bicolor. Saguinus comes from Portuguese and Latin and refers to small monkeys. Bicolor is a reference to the species’ two-shade fur.

How Many Teeth Do Pied Tamarins Have?

What Family Are the Pied Tamarin In?

Yes, pied tamarins are flirting with extinction. Since the hairless-faced monkeys only live in one small area of Brazil, they’re vulnerable. The IUCN categorizes the small primates as Critically Endangered.

How Many Pied Tamarins Are Left in the World?

Despite being an endangered species, scientists don’t have a firm count on the number of animals remaining. What they know is that the population has plummeted by over 80 percent over three generations — a concerning decline.

How Much Do Pied Tamarins Weigh?

Pied tamarins are very light. The bare-faced primates weigh about 430 grams. In imperial measurements, that’s 15 ounces, or just under one pound — about the same as a baseball.

What Kingdom do Pied Tamarins belong to?

What phylum to Pied Tamarins belong to?

What family do Pied Tamarins belong to?

What order do Pied Tamarins belong to?

What genus do Pied Tamarins belong to?

What type of covering do Pied Tamarins have?

Pied Tamarins are covered in Fur.

In what type of habitat do Pied Tamarins live?

What is the main prey for Pied Tamarins?

What are some predators of Pied Tamarins?

Predators of Pied Tamarins include hawks, snakes, and wild cats.

What are some distinguishing features of Pied Tamarins?

How many babies do Pied Tamarins have?

The average number of babies a Pied Tamarin has is 2.

What is an interesting fact about Pied Tamarins?

Pied Tamarins are only found in one area of Brazil!

What is the lifespan of a Pied Tamarin?

Pied Tamarins can live for 8 to 15 years.

How fast is a Pied Tamarin?

A Pied Tamarin can travel at speeds of up to 24 miles per hour.