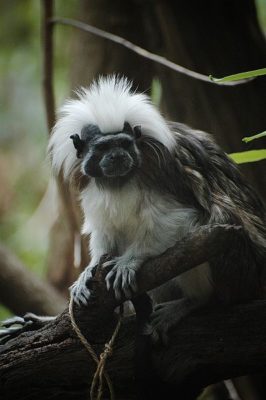 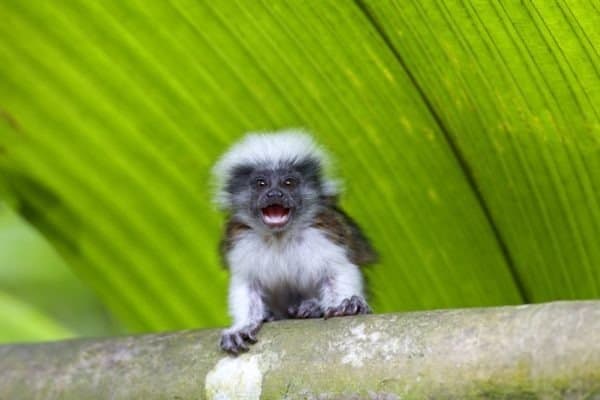 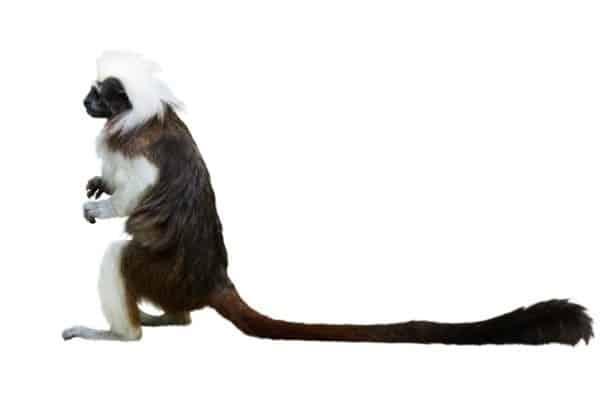 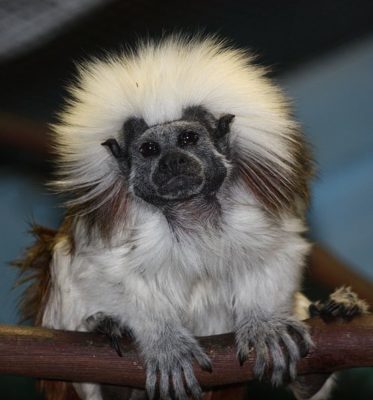 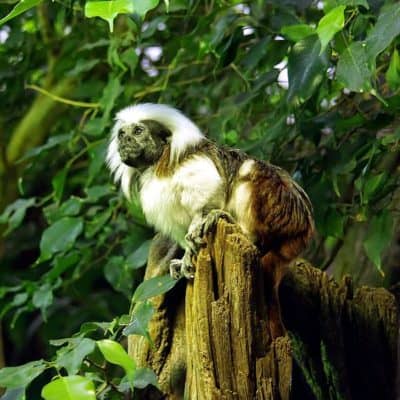 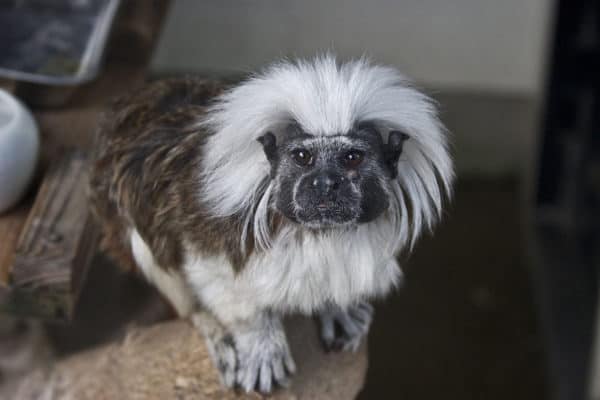 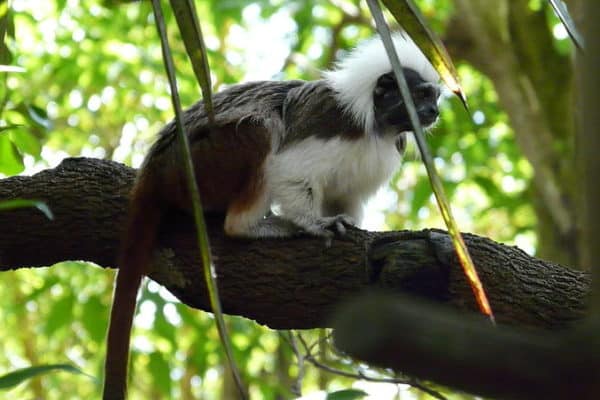 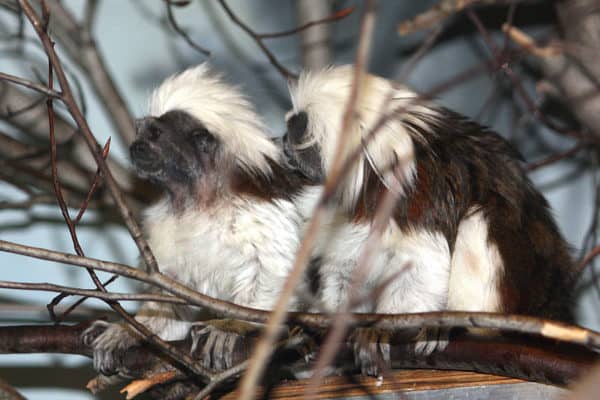 “The cotton-top tamarin features a remarkable crest of white hair on its head.“

The crest is only the most visible outward characteristic of this amazing species. It has many other incredible features, including its agile climbing ability, its highly cooperative and altruistic social structure, and its intelligence and complex use of vocalizations. Because of habitat loss and poaching, however, the species is in perilous danger of extinction in the wild. Conservationists are committed to keeping this unique primate alive.

The scientific name for the cotton-top tamarin is Saguinus oedipus. The name comes directly from the legendary zoologist and botanist Carl Linnaeus in 1758. He is widely regarded as the father of modern taxonomy. It is not actually known why Linnaeus chose this name. Although famous for its association with the mythical Greek king, Oedipus means swollen-footed, but this is an odd choice since the species does not have particularly large feet.

The cotton-top tamarin is a type of New World monkey. As the name suggests, New World monkeys are found almost exclusively in the Americas. This distinguishes them from the Old World monkeys of Africa and Asia. The species is closely related to Geoffroy’s tamarin, the white-footed tamarin, and all other tamarins within the same genus. More distantly, the tamarins are related to the marmosets of South America. Together, tamarins and marmosets make up the family Callitrichidae.

The cotton-top tamarin is a small arboreal monkey with a body length of about 7 to 10 inches — the tail adds another 10 inches or so — and a weight of only one pound. This is barely larger than a squirrel. The males and females have the same size and appearance. Because it has claws instead of nails and no prehensile tail, this species is a little different from most New World monkeys. But even without a prehensile tail, the cotton-top tamarin is an expert climber that spends much of its time gracing the branches high above the ground. Lacking opposable thumbs, the sharp claws allow them to cling tightly to the bark of trees.

The cotton-top tamarin has a highly developed social structure built around the need for cooperation and altruism. Known as a troop or tribe, the group consists of three to nine individuals (though sometimes up to 19 individuals) with a dominant mating pair, the offspring, and sometimes the immediate family. The dominant pair is responsible for the safety of the group and the continuation of the family line. The rest of the group adheres to a very specific hierarchy and rank based on dominance. Everyone within the group has a role, particularly when it comes to raising the young. Groups are not always permanent, and sometimes a monkey will leave one group to join another.

The cotton-top tamarin exhibits what could perhaps be described as a finely developed sense of fairness. Everyone in the group is expected to sacrifice for the good of the whole, and the failure of any member to cooperate could invite retribution and punishment. The evidence suggests that there is an element of calculation to the monkey’s altruism. Each individual makes decisions about how to treat other members based on past behavior and expectation of future cooperation.

In order to communicate with each other, the cotton-top tamarin appears to have a complex suite of calls, including whistles, trills, and chirps. Although obviously not as well-developed as human language, these vocalizations do appear to have grammatical rules for communicating the individual’s intentions, emotional states, and facts about the world. For example, studies have shown that this species can add syllables to words as way to modify the meaning. This suggests that grammatical rules may have evolved from the ability to remember and track the position of words or any other object in a sequence.

The cotton-top tamarin is most active during the day between sunrise and sunset. Most of its time is spent foraging for food, raising the young, and engaging in social activities such as play time and mutual grooming. The group is fiercely territorial and will try to ward off intruders with loud calls and a display of its rear end and genitals. It also uses scent glands to mark its territory and also possibly signal reproductive availability. The females appear to use the scent gland 10 times as much as the male.

The cotton-top tamarin is named after the massive crest of white hair that adorns its head between the forehead and shoulders. The white hair is believed to play a role in some of its behavior. When agitated in some way, the tamarin can raise the hair on its head to make itself appear much bigger than it actually is. The white plume also helps the monkey secure a mate as part of its courtship rituals.

In addition to the mane, this species also has white hair on its chest and legs. The remaining body is covered in a kind of black, reddish-brown, and orange fur. The black skin along certain parts of the face, limbs, and rear end is covered in very short and fine gray hairs in some tamarins.

The cotton-top tamarin is native to the rainforests and woodlands of northwestern Colombia. The species was once dominant over much of the Columbian forests, but its natural range has become gradually shrunken and fragmented with the spread of human civilization. The species resides in large trees, where it hunts, plays, and sleeps. The home range is largely chosen for the abundance of food in the area.

The cotton-top tamarin is one of the rarest species of living primates in the world. It is estimated that there are less than 6,000 individuals remaining in the wild. Perhaps only 2,000 of these are mature monkeys. Many more tamarins live in captivity, perhaps even outnumbering the wild population.

According to the IUCN Red List, the cotton-top tamarin is critically endangered. Due to the fragmented nature of the remaining populations, it is at serious risk of extinction. Much of the conservation effort is focused on preserving what remains of the indigenous rainforests. This means working with local farmers and ranchers to prevent future deforestation and create new protected areas with special safety corridors for the tamarins to travel through. Many preserves and zoos are also attempting to breed the species and rehabilitate numbers.

The cotton-top tamarin is an omnivorous species that feeds on a combination of plant matter and animal matter. The vast majority of the diet consists of fruits and insects, as well as the gums of trees. Because it lacks large incisors to chew through the bark, this tamarin species must rely on other animals to open the bark for them in order to access the gum inside. The rest of the diet includes reptiles, rodents, and other animals.

This tamarin spends a great deal of its time casually foraging for food in the middle layers of the forest canopy. This involves a long and tedious process of searching for edible plants or looking in small hiding spots for potential prey. When it encounters a reptile or rodent, the monkey can kill it with a severe bite to the head. This species also plays an important ecological role by dispersing large seeds throughout the environment. It can travel a few miles every day in search of food.

The cotton-top tamarin has much to fear from snakes, birds of prey, and jaguars and other wild cats. The canopy offers a degree of protection from hungry predators, but an individual tamarin needs the protection of the entire group to fully survive the dangers of the wild. Human activity presents another major challenge. Both habitat loss and poaching have caused numbers to dwindle dramatically, threatening the survival of the species.

Evidence suggests that the reproduction of the cotton-top tamarin is largely driven by a monogamous relationship between the dominant pair of the group (though polygamous relationships have also been observed). The dominant female of the group has exclusive breeding rights. She suppresses the breeding ability of the other females by releasing pheromones that prevent conception. If the dominant female dies, then the next highest female, usually a daughter, will inherit those breeding rights.

Once impregnated, the dominant female will carry and give birth to twin babies to coincide with the rainy months of January to June due to the availability of food. The gestation period lasts for four to six months of the year. The young children are then born with eyes open and a small mane, covered in fur. They weigh approximately 15% to 20% of the mother’s body weight. The entire group shares the responsibility of caring for the children as a team. Parental care must be learned through experience, and an inexperienced parent or caregiver might abandon or abuse the child instead. While it is obviously the female’s job to nurse the children, the males appear to spend more time and effort with child care than the females.

Cotton-top tamarins develop relatively quickly for a primate. By week 14, they will become independent enough to move on their own without the help of an adult. By the year and a half mark, females will become sexually mature. By the 24th month, males will finally reach sexual maturity as well. The typical lifespan of this species is somewhere between 10 and 13 years in the wild.

Cotton-top Tamarins in the Zoo

The cotton-top tamarin is a common sight of many zoos across the United States, including the Central Florida Zoo and Botanical Gardens, the St. Louis Zoo, the Oakland Zoo, the Central Park Zoo, Zoo Boise, the Phoenix Zoo, the Franklin Park Zoo in Boston, the Potter Park Zoo, and the Peoria Zoo in Illinois. Many of these zoos are committed to keeping the species alive through specialized breeding programs.

Why is the cotton-top tamarin endangered?

There are two main reasons why the cotton-top tamarin is endangered. The first reason is the massive amount of poaching for both research purposes and the illegal exotic pet trade. According to one estimate, approximately 40,000 cotton-top tamarins were captured for research before an international ban in 1976.

Second, the monkey’s natural habitat has been whittled away due to agriculture, development, and energy projects. One hydroelectric dam had the effect of flooding a significant portion of the monkey’s sanctuary at Paramillo National Park. It is estimated that only about 5% of the monkey’s original habitat remains.

What is the scientific name for the cotton-top tamarin?

Saguinus oedipus is the scientific name of the cotton-top tamarin. As mentioned previously, the name means swollen-footed in Greek but does not appear to be based on the actual physical characteristics of the species.

What fruit does cotton-top tamarin eat?

The cotton-top tamarin isn’t picky about what kind of fruit it eats. In captivity, it is often fed common fruits like grapes and apples. In the wild, it will eat whatever local fruit is available.

How many cotton-top tamarins are left in the world?

There are approximately 6,000 cotton-top tamarins remaining in the wild. Many more of them reside in captivity.

How long do cotton-top tamarins live?

The species can actually live more than 20 years. However, due to predation and human threats, the typical cotton-top tamarin probably lives no more than 13 years in the wild.

How to say Cotton-top Tamarin in ...