They are commonly mistaken as logs in the water due to their cylindrical body. Click through all of our Spotted Gar images in the gallery. 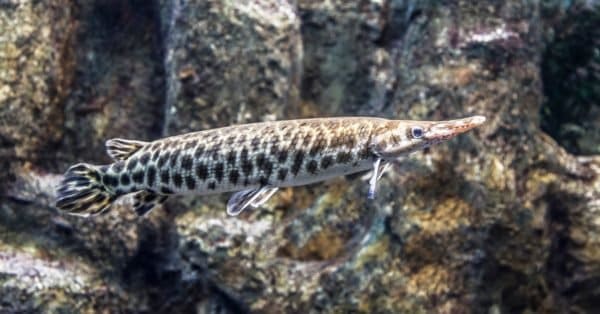 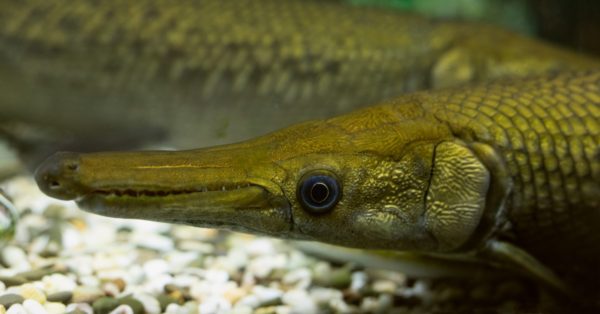 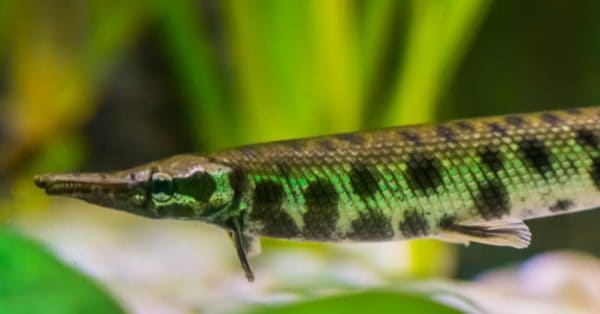 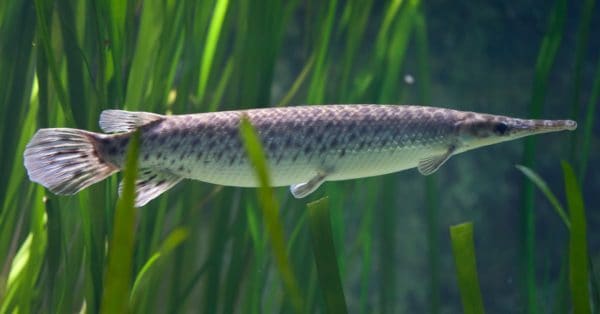 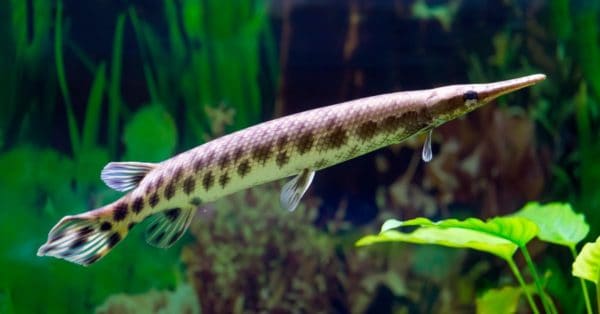 View all of the Spotted Gar images!

The spotted gar can be found in calm pools located in freshwater rivers, ponds, and creeks.

It is one of 7 species of gar. They eat the minnows, small blue crabs, and other types of animals used as bait by fishermen. Consequently, many fishermen consider spotted gar pests because they compete with other fish for the bait.

The scientific name of the spotted gar is Lepisosteus oculatus. It belongs to the Lepisosteidae family and the class Actinopterygii. Lepisosteus is a Greek word meaning scale (lepis) and bone (osteon). The word oculatus means eyed.

The most notable quality about a spotted gar is its shape. It’s a long, thin fish paired with a long snout filled with tiny, sharp teeth. Its scales are olive or brown with large dark spots across its body. They are usually 2 to 3 feet long but can be as long as 59 inches (just under 5 feet). They usually weigh from 4 to 6 pounds, but the maximum is 9.7lbs.

Of course, there are always exceptions! The record for the largest spotted gar is 43 inches long weighing 15 pounds.

One of the ways they protect themselves from predators is by staying hidden in submerged vegetation. Their color also helps them to blend into their habitat.

While there are many similarities between these two species, there’s one notable difference.

Both of these fish live in bodies of water in the Florida area. They are about the same length and have spots on their head, body, and fins. However, when looking closely at these two fish, there is more distance between the eye and the gill cover on the spotted gar than there is on the Florida gar.

Spotted gar lives in temperate freshwater rivers, streams, ponds, swamps, and lakes. Their habitat includes brush, fallen branches, and other debris where they can hide in the calm water. Generally, these fish occupy depths of between 10 to 16 feet.

They are found in North America including southern Lake Michigan, Lake Erie, the Mississippi River, Florida’s Apalachicola River, the Gulf of Mexico, and in the Nueces River in Texas.

Though the exact population of spotted gar is unknown, scientists estimate the population at greater than 100,000 adults.

The population of these fish in the Michigan area is threatened by habitat destruction. They are listed as a species of special concern there.

The conservation status of this fish is Least Concern with a stable population.

These fish are carnivores eating crayfish along with a variety of other fish. They are known for ambushing their prey. These fish hide behind underwater vegetation as they wait for the approach of prey. When a crayfish approaches, the fish darts from undercover and grabs it with its tiny, sharp teeth.

Adult spotted gars have few predators with the exception of larger gar species such as the alligator gar.

The eggs and young of these fish are vulnerable to larger fish.

To some people, these fish are delicious food. Oftentimes, they are caught while recreational fishermen are trying to catch other types of fish. Spotted gar is attracted to the bait used to catch catfish or trout.

Though adult fish can be food to people, its eggs contain toxins and shouldn’t be eaten.

What does the spotted gar eat?

When it comes to food, these fish eats a lot of crayfish! They eat other crustaceans and fish such as bass, crappies, catfish, and sunfish among others.

These fish spawn between the months of February and June. Males and females gather in shallow water and the males compete for the largest females. Once the eggs are fertilized, they’re laid in October. A female lays from 1000 to 14,000 eggs on aquatic plants. The eggs hatch in about 10 to 14 days. Females lay eggs just once per year. After laying the eggs, the parents provide no care. These fish reach sexual maturity at 1 year old.

Spotted Gar in Fishing and Cooking

Some species of gar like the alligator gar are sold commercially as food. However, the spotted gar is usually caught by recreational fishermen when they are in pursuit of another type of catch. Instead of throwing them back, many fishermen eat them.

These fish are usually caught at dusk when they’re searching for prey. They’re especially active on hot days in the summertime.

These fish are consumed as food in the United States, especially in the south. It’s said the fish tastes like alligator. Of course, a person would have to eat alligator to understand the comparison!

There are a variety of recipes including stew, fish cakes, or stir fry just to name a few. Many people eat them with vegetables.

Where are spotted gar found?

These fish are found in lakes, streams, and rivers around North America.

How do you catch a spotted gar?

Spotted gar is attracted to minnows, sunfish, and blue crabs as bait. They are active in the evening.

What do spotted gar eat?

They eat crayfish and other crustaceans along with catfish, sunfish, and crappies.

These fish are not dangerous. In fact, they spend most of their time hiding in underwater vegetation and fallen branches. They use their teeth to eat crayfish and other prey.

How big does a spotted gar get?

The size of a spotted gar can measure as long as 59 inches.

Can you eat a spotted gar?

Yes, the adults can be eaten, but stay away from their eggs!