The Tasmanian tiger could open its mouth almost 90 degrees.

Click through all of our Tasmanian Tiger images in the gallery. 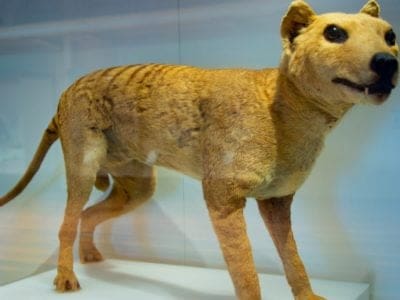 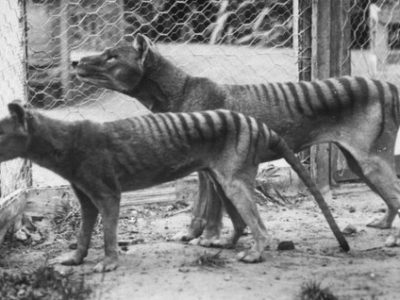 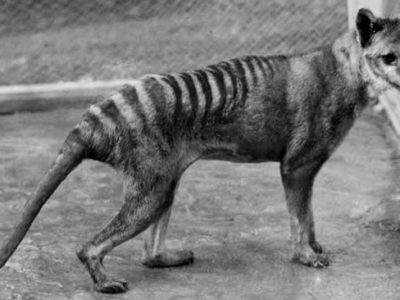 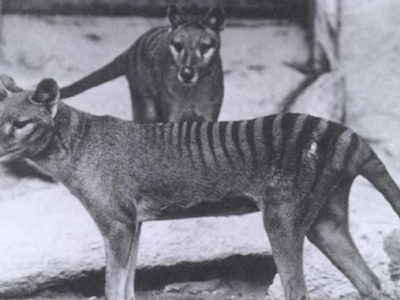 View all of the Tasmanian Tiger images!

One of the most fascinating animals to have existed, the Tasmanian tiger, or Tasmanian wolf, or thylacine was extinct in the wild by the early 20th century and went extinct altogether in 1936.

It looked like a dog with some tiger stripes but was neither a dog nor a tiger. Like so many other animals found in Australia and Tasmania, it was a marsupial. This means its young were born in a basically embryonic state and spent most of what would be their gestation in their mother’s pouch. The thylacine had its dog-like shape the better to be the top predator in Tasmania. Though the people responsible for its extinction seem rather desperate to bring it back, the Tasmanian tiger is most likely gone for good. Here are some facts about the Tasmanian tiger:

The scientific name of the Tasmanian tiger was Thylacinus cynocephalus. Thylacinus means “pouched one” and cynocephalus is Greek for “dog-headed,” so the name translates into a dog-headed animal with a pouch. It was the only species in its genus.

The Tasmanian tiger or thylacine had the appearance of a dog, but it was not even closely related to a dog. Its canine looks were an instance of convergent evolution. This is when two unrelated animals evolve similar characteristics, most likely due to the niche it plays in its ecosystem. Like the dog, the Tasmanian tiger was a carnivore and a predator and was indeed the apex predator of the island of Tasmania off the coast of Australia.

The Tasmanian tiger was the size of a medium-sized dog such as a pharaoh hound though its long tail was stiff because the bones there were fused. It had a long muzzle with whiskers, stood about 2 feet high at the shoulder, was about 39 to 51 inches long excluding the 2-foot long tail, and weighed as much as 66 pounds. Males were a bit larger than females. It had a short, dense coat whose ground color ranged from fawn-colored to chocolate. Its belly was cream, and its ears were rounded and erect. There were between 15 to 20 stripes across the animal’s back that continued to the base of the tapering tail and dipped into the upper thigh. These stripes were how the thylacine got its name of the Tasmanian tiger. The stripes tended to fade in older animals.

There are scientists who believe that, unlike the dog, the Tasmanian tiger’s sense of smell wasn’t very acute and that it found its prey through sound and sight, even though it hunted at night. On the other hand, the size of the sinus cavity in the animal’s skull points to a well-developed sense of smell. Though it had an unusually large gape and 46 teeth as opposed to a wolf’s 42, the Tasmanian tiger’s jaws weren’t very powerful. They had nothing like the power of a wolf’s jaws, for example.

Besides its pouch, the one thing that differentiated the Tasmanian tiger from a dog or just about any other animal was its footprint. The front and hind feet had a large pad with smaller toe pads, and the pads of the front feet were in a nearly straight line. This probably led to the thylacine’s uncomfortable gait. Despite this, it could also jump considerable heights from a standing position, hop like a kangaroo and stand on its hind legs, using its tail for balance.

The pouch of the female thylacine opened to the back, unusually, and had four teats.

Despite its reputation as a blood-thirsty killer that caused bounties to be placed on it and for those bounties to ultimately result in its extinction, the thylacine was characterized as shy around humans. It even seemed to sometimes die of shock if it was captured. The animal rarely attacked unless it was cornered or startled. These observations were made of captive animals, for there is very little known about its behavior in the wild.

The thylacine hunted at night or at dusk and spent the day in its den. Some observers believed that sunlight actually blinded the animal because it would retreat to a shadowy part of its enclosure during the day. Others claim that the thylacine basked in the sun as if it was cold-blooded. The animal was thought to have great stamina, and instead of ambushing prey, it would simply follow it until it became exhausted, then attack. The thylacine may have hunted alone or in groups.

The Tasmanian tiger had a good repertoire of vocalizations, including growls, hisses, coyote-like barks, whines and snuffling sounds used between members of a family. When it slept it would either stretch fully out or curl up the way a dog does.

The habitat of the Tasmanian tiger seemed to encompass the coastland of Papua New Guinea and Australia before it was restricted to the island of Tasmania. It was found in scrublands and forests in elevations as high as 1083 feet, and the last populations were found in Tasmanian’s rainforests. It may have been somewhat migratory as it followed prey.

The Tasmanian tiger seemed to prefer marsupials such as echidnas that were of a size that its relatively weak jaw could handle, though its dens were sometimes found with sheep or calf bones. Some speculate that the presence of these bones was the result of scavenging while other scientists claim that the Tasmanian tiger only ate animals that it killed. If it did kill livestock, it only ate certain parts of the animals such as the nose, certain types of muscle, and fat from the liver and the kidney. This type of behavior led people to believe that the thylacine drank blood like some vampire beast, which contributed to its fearsome reputation.

While in captivity, Tasmanian tigers were fed meat such as rabbit, beef, horseflesh, chickens and wallaby.

The Tasmanian tiger was an apex predator, so nothing preyed upon it until the arrival of humans, who wanted its territory for their towns and farmlands. As a result, hunters were paid great sums of money to kill the animal, and by the time the Australian government sought to protect the thylacine, it was too late. Humans also brought competitive animals such as dingos.

What eats the Tasmanian tiger?

The Tasmanian tiger was the island’s top carnivore. Nothing ate it.

What does the Tasmanian tiger eat?

The Tasmanian tiger ate animals that were small enough for it to handle, such as wallabies, bandicoots, young emus, wombats, and possums. Now and then it admittedly raided henhouses. This was how the last wild thylacine met its end.

Not much is known about how Tasmanian tigers reproduced, though it seems that they bred year-round. This is known because females with joeys in their pouches or half-grown babies were caught in all seasons, though babies and juveniles were mostly seen in late summer and mid-spring. Some biologists believe that there was a four-month mating season with a two-month gap in between.

No one knows how long a Tasmanian tiger’s pregnancy lasted, but if she was like other marsupials, she was probably pregnant for only two weeks. Then, her babies would be born in a very underdeveloped state. Still, they had enough strength to make their way to her pouch and latch on to one of her teats. They would spend three months in the pouch until they were too big to fit. When that happened, the mother would leave them in the den while she went hunting. Tasmanian tiger joeys may have stayed with their mother for another half a year after they left the pouch.

These animals are, unfortunately, most likely extinct. They are not only extinct in the wild, but they are extinct everywhere. There are no specimens to be found in zoos or nature preserves. Before that catastrophe, there were about 5000 thylacines on Tasmania at the time the British colonized the island.

View all 42 animals that start with T

The Tasmanian tiger is probably extinct, though there have been hundreds of alleged sightings of the animal since the death of Benjamin, the last thylacine in captivity. At least one person has also seen the distinctive thylacine footprint.

Is a Tasmanian tiger a cat or a dog?

The Tasmanian tiger is neither a tiger, a cat nor a dog. It is a marsupial that looks like these animals, especially the dog because it filled the same ecological niche in its habitat. This is called convergent evolution.

Can we bring back the Tasmanian tiger?

If the sightings are real, the Tasmanian tiger may not have to be “brought back.” It will need rehabilitation and protection. In 1999 scientists tried to clone a Tasmanian tiger from preserved thylacine DNA, but the DNA was too corrupted to be useful. Work is ongoing to sequence the thylacine’s genes from preserved pouch joeys and possibly clone an animal that may be a reasonable facsimile of it.