A breed that originated in central Turkey! 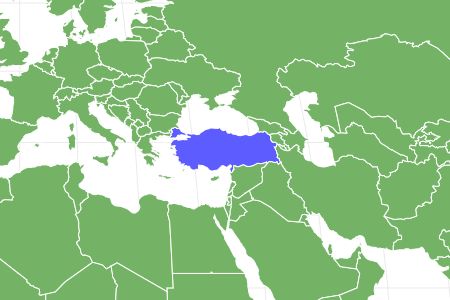 View all of our Turkish Angora pictures in the gallery.

View all of the Turkish Angora images!

The personality of the Turkish Angora cat is as elegant as the traditional white coat that has become the most popular look for the breed.

These cats, even when they are young, have a particular affinity for time with their owner, gracefully playing and cuddling with anyone in their family. While they may have some separation anxiety without their familiar surroundings, the Turkish Angora has a certain alertness and confidence that shows how intentional every movement can be.

Turkish Angora Traits: What to Know Before You Buy

When considering a Turkish Angora as your next pet, there are some important details to know before making this investment:

The Turkish Angora’s beauty and affection complement the adoring personality that they show their owner, involving themselves quickly in everything that they do. They’ll sit for long periods of time for the simple enjoyment of comradery, which is only further complemented by their good nature.

Despite this adoration, a Turkish Angora will be rather determined and focused on the activity that they want to do next. Whether they want to play with their owner, go after innocent toes, or prance around a living room, the Turkish Angora has a rather independent attitude regarding their daily activities. Owners that are worried about aggression should consider spaying or neutering their cat, as it also reduces the risk of certain marking behaviors (like spraying) in territorial pets.

Luckily, watching the Turkish Angora prance around the room can be an elegant experience. This cat has incredible grace and intelligence, supporting every move they make with deliberate forethought. Though they will willingly be held by anyone who wants to adore them for a few minutes, they would much rather entertain others as they entertain themselves, even if only to bask in the sunlight from a window.

The Turkish Angora is one of the few breeds that particularly loves water, though this statement is not necessarily true for every cat of the species. Some will jump into a bathtub or a pool to show off yet another way that their body can exude enthusiastic grace.

Health and Entertainment for your Turkish Angora

With a long and slender body, the Turkish Angora is rather round with a single full coat to add to their elegance. With the britches on their hind legs, this cat stands about 9-14 inches tall. Unfortunately, the world record for the largest Turkish Angora cat has yet to be recorded.

Female Turkish Angora cats typically range between 8 and 12 lbs. On average, males may be slightly larger than females, weighing greater than the average 12 lbs. If the cat is neutered or spayed, it should not impact its future growth, but it may cause its metabolism to change.

Some of the cats that are relatively similar in six include the Norwegian Forest cat, the American Bobtail, and the Siberian cat. However, the Turkish Angora is not quite as big as the Main Coon cat, which can weigh over 20 lbs.

When looking to adopt the Turkish Angora, the price can fluctuate significantly. Adopting from a shelter is always cheaper, often ranging from $75 to $150. However, seeking out a breeder that specifically offers purebred kittens can increase the price from $600 to $2,000. Kittens that come from incredible lineage and that would be considered for competition can cost as much as $3,000.

The primary reason that the price of these cats can vary so much is based on their genetics. Their exotic breed is already rather rare to come across, but the body ratio, color choice, and family line bring more value to the breed, especially as a kitten.

Adopting from some rescues will bring the cost of these cats down significantly, especially if you want to foster one. Some of the current Turkish Angora kittens online include:

While shopping online for these cats, keep in mind that there are many breeders that do not post the price that they sell for online. Spending some time in personal discussions with the breeders can give a better idea of the cost in your area.

Whether the Turkish Angora is a kitten or cat, their long and slender body is a prominent quality. Their elegant and refined nature tends to be consistent throughout their lifetime, though they may only weigh 5 lbs. before they reach adulthood (when they are around 12 lbs.) The Turkish Angora reaches sexual maturity between 8 to 12 months, though many owners choose to sterilize their pets for health reasons.

Regardless of age, these cats are always the best when it is with its family.

While the average cat lives to be about 16 years old, these cats tend to live to be between 9 and 14 years old. Even though they’ll need some care for their coat, veterinary care for early intervention against rare feline diseases is necessary.

Since many of these cats carry the gene for deafness, they should be screened early to prepare the owner for the proper care. Kittens that have hereditary ataxia will not likely reach adulthood, though the onset of hypertrophic cardiomyopathy may occur between ages 2 and 6. Males are more prone to it, but they could pass earlier from heart failure.

Traditionally, these cats have a silky yet long coat, found in many different colors and patterns. While white is the most common, they are also found in black and white, gray, brown, and other combinations. Since their ears are rather large (in comparison with the rest of their triangular head), and they have almond-shaped or round eyes, cats that only meet a few of these criteria are likely mixed.

If you’re in doubt, check for an undercoat – Turkish Angoras don’t have one at all!

As a species, these cats don’t have any subtypes, per se. However, they are known for coming in many different colors. Most people imagine the Turkish Angora with a white coat because it is the most popular. However, they can also be found in red, brown, grey, black, and white.

Their patterns are rather distinctive as well, and they can be found in:

Currently, competitions do not recognize lilac as an “official” color of the breed.

Turkish Angoras are Omnivores, meaning they eat both plants and other animals.

What Kingdom do Turkish Angoras belong to?

What phylum to Turkish Angoras belong to?

What class do Turkish Angoras belong to?

What family do Turkish Angoras belong to?

What order do Turkish Angoras belong to?

What type of covering do Turkish Angoras have?

Turkish Angoras are covered in hair.

What genus do Turkish Angoras belong to?

How many babies do Turkish Angoras have?

The average number of babies a Turkish Angora has is 4.

What is an interesting fact about Turkish Angoras?

The Turkish Angora is a breed that originated in central Turkey!

What is the scientific name for the Turkish Angora?

The scientific name for the Turkish Angora is Felis catus.

Yes. Even though they can be traced back to the Ankara Zoo, and they were accepted in 1973 for the Cat Fanciers’ Association, this cat breed is still rather rare today.

The total cost of this cat will largely depend on where they are purchased from. Working with a breeder to buy a Turkish Angora kitten can cost as much as $2,000.

Yes. Turkish Angora cats are friendly, playful, and affectionate. However, the breed is assertive with their dominance over other pets to show that they are in charge.

How much does a Turkish Angora cat cost?

The cost of a Turkish Angora cat will depend on how old the cat is and where it is purchased from. To adopt one, the cost can be as little as $75, but purchasing kittens from a breeder can range from $650 to $2,000 each.