They have crests that rise or fall depending on their emotions 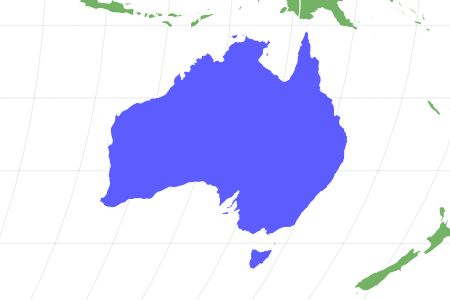 View all of our Cockatiel pictures in the gallery.

View all of the Cockatiel images!

“The Cockatiel is the second most popular cage bird after the budgie.”

One of the most popular birds to have as a companion, this small parrot is native to Australia. Though it doesn’t mimic human speech as well as some of its cousins, it is prized for its beauty and its vivacious personality. The price of this little cockatoo is also rather moderate. Read on to learn more about the cockatiel.

Here are four amazing facts about this popular small parrot.

Where To Find the Cockatiel

The cockatiel is native to most of Australia, especially the inland areas where there are sources of freshwater. Habitats preferred are grassland, shrubland, savannas, or other open areas, especially those with acacia shrubs. They’re also found in cities, and flocks can be seen perching on electrical wires.

The birds nest in tree cavities at least 6.5 feet off the ground that were hollowed out by other animals. They most often choose dead eucalyptus trees, and a pair will claim an entire tree for themselves. As part of mating behavior, the male will actually inspect the nest to make sure that it’s safe.

The bird’s scientific name is Nymphicus hollandicus. Nymphicus because the German ornithologist Johann Georg Wagler thought them as beautiful as the nymphs of Greek mythology. Hollandicus is Latin and refers to New Holland, which was the old name for Australia. There are only one species, but the bird comes in many types of color morphs. Cockatiels belong to the same family as the cockatoo. There are also 8 genera of cockatoo that are further divided into 21 species. The cockatiel is the only species in the Nymphicus genera but has been known to hybridize with the galah, a cockatoo in the Eolophus genus.

The Weiro bird is a slender bird with a long tail and a crest, and in their wild habitat, the males have gray plumage with patches of white on the wing and cheddar cheeks bordered in white. Females are also mostly gray, and their cheddar cheeks are less vivid and do not have a white border. Their colors camouflage the birds as they forage for seeds on the ground. The cheek patches are not just there for aesthetics. The feathers found there actually protect the bird’s eyes and cut down on turbulence when it flies.

Health and Entertainment for your Cockatiel

The feathers in the long tail are barred and fan out when the bird flies and the crest is a guide to the bird’s mood. When it’s fully erect the bird is excited. When it’s at an angle the bird is relaxed, but when it is laid flat against the head the bird is angry or feels threatened. If the crest protrudes outward when it’s flat, the cockatiel is flirting.

The beak of the quarrion is dark gray, and its legs are black. Two of their toes face backward and two face forward, a characteristic called zygodactyly. All parrots have this trait.

The quarrion has a gregarious personality and flocks travel and feed together in the wild. Some of these flocks can have thousands of birds. Yet, cockatiels will usually fly away if they feel threatened. They rely on their feathers to help maintain a high body temperature, so they often preen themselves. They coat their outer feathers with a type of oil to keep them waterproof, and shake off excess powder down, which is a reside of old feathers that also keeps the feathers waterproof.

Besides arranging its crest, the Weiro bird uses sounds to communicate. Its voice can be loud and carry well, especially if it senses immediate danger. It can also spread its wings while it perches as mating behavior. Pet bird guides describe the cockatiel as energetic and playful with a peaceable personality. A bird that’s given good care can have a lifespan of over 30 years.

Depending on where they live, some quarrions are nomadic while others properly migrate. Nomads continually fly long distances to find food, especially if they come from the north of Australia, where the climate is wetter. Cockatiels that live in the southern part of the country migrate in the winter and spring.

The bills of these birds can help them eat many types of food, but seeds make up most of their diet, especially the seeds of acacia shrubs. They mostly feed on the ground in pairs, small groups, or huge flocks. If they must, they’ll also pluck seeds that are still on the trees. They’ll hydrate from bodies of freshwater. Because they’re especially vulnerable to predators while they drink, quarrions only take a few sips and are able to go without water for a long time. The birds also eat insects, berries, and fruit. Though they are silent as they forage, they are noisy when they fly.

The main predator of quarrions is other birds, especially birds of prey. But they are fast fliers and will quickly alert the rest of the flock to danger through loud screams. It also helps for the quarrion to gather in large flocks, where many can be on the lookout for predators and predators can be confused when thousands of birds take wing at the same time.

Cockatiels are also subject to diseases spread by Giardia and Cryptosporidium bacteria. Some of these bacteria attack the liver, and the resulting illness can shorten the bird’s life.

This small parrot is monogamous and pairs up when it’s young, though it may be a while after this before it actually breeds. The cockatiel naturally breeds when the spring rains come. They engage in mating behaviors such as peeps, whistles, calls, holding the tail feathers up in the case of the females, and strutting and holding their wings out in the case of the males. The males, as stated, also check out the nest cavity.

Weiro birds also easily breed in captivity if the cage is roomy and is provided with a nest box.

The female lays an average of five eggs after mating. The eggs are laid every other day and are incubated between 17 and 23 days. If she loses an egg, she’ll lay another one to replace it. This is called indeterminate egg-laying. Because the male’s sperm lives a long time, she can lay an egg as long as a month after mating.

During the incubation, the males sit on the eggs from the early morning till late in the afternoon while the female incubates the eggs through the night. When the chicks hatch, both parents care for them. They’re ready to leave the nest when they’re about a month old, but they’re not ready to reproduce themselves until the female is 18 months old, and the male is 13 months old. In the wild, a cockatiel’s lifespan can be 10 to 14 years, and it can be much longer if the bird is kept as a companion.

The exact number of quarrions has not been determined by scientists, but the population is stable, and the conservation status is least concern.

Are Cockatiels carnivores, herbivores, or omnivores?

These birds are mostly herbivores. They much prefer to eat seeds, though they will also take fruit and berries.

How much is a cockatiel?

What can cockatiel eat?

How do I tame a cockatiel?

The first rule of taming a cockatiel is to use gentleness and patience. Let the bird stay in its cage in a calm and quiet area for a while, and talk to it in a soft voice for a few days before trying to train it.

The pet owner can then introduce a treat while they talk to the bird, then quietly introduce their hand. The bird will eventually associate the hand with a treat. Do this no longer than twice a day for 10 to 15-minute sessions. If this is done carefully, the owner can eventually encourage the bird to step onto his finger.

Where do I buy a cockatiel?

Can a cockatiel talk?

Cockatiels aren’t much for talking, but they can mimic tunes and whistles.

Are cockatiels good pets for beginners?

Guides for companion birds claim that the cockatiel is a good pet for a beginner. They are easy to care for, easy to tame and relatively quiet for a parrot.

Do cockatiels recognize their owners?

Cockatiels do seem to recognize their owners, and the way they move their crests show that they are happy to see them.

What are cockatiels’ lifespan?

In the wild, this small parrot lives between 10 and 14 years but can live over 20 or even 30 years in captivity.

Why is my cockatiel sleeping so much?

Though birds naturally have periods of sleep throughout the day, a cockatiel that seems to sleep a lot while perching on both feet might be sick. In that case, it’s time to get the bird to the vet.

What is the difference between Cockatoo and Cockatiel?

The main difference between a cockatoo and a cockatiel is that most species of cockatoo are larger, cockatoos are more widely distributed, and cockatiels make better pets.

Although both are kept as pets, cockatoos are known for their difficulty. Subsequently, they have a smaller share of the total number of birds kept as pets worldwide. On the contrary, cockatiels are extremely easy to keep and are among the most popular birds kept as pets anywhere in the world.