Has distinctive V shape on head!

Click through all of our Geoffroys Tamarin images in the gallery. 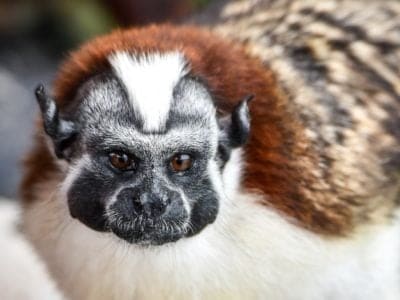 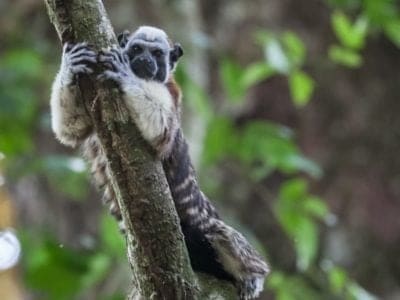 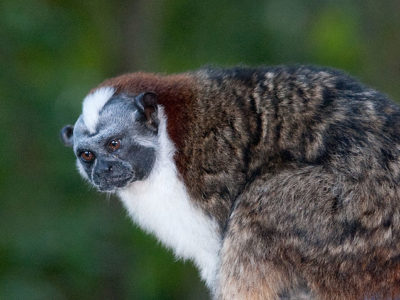 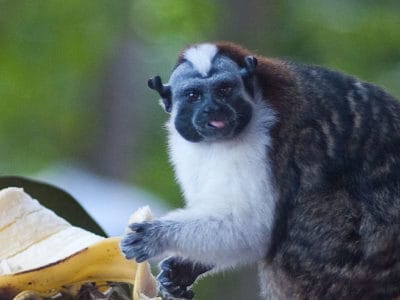 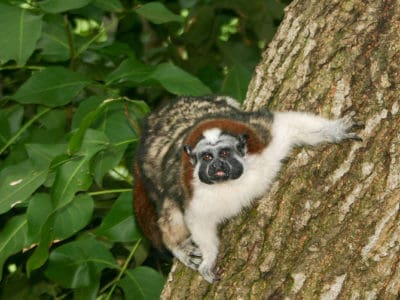 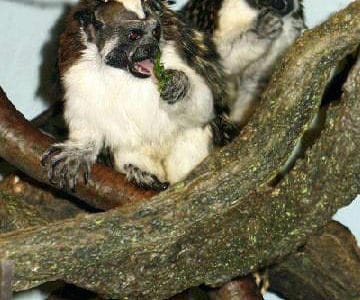 View all of the Geoffroys Tamarin images!

“A Geoffroy’s tamarin can jump up to 16 feet from one treetop to another.”

Geoffroy’s tamarins are omnivores eating tree sap, insects, fruits, and various plants. They are active during the day and spend most of their time up in trees. These are social animals living in groups of 3 to 5 monkeys. They communicate with one another using whistles, high-pitched chattering, rasps, and even sneezes. These animals can live up to 13 years in the wild.

The scientific name for this monkey is Saguinus geoffroyi. The word Saguinus means, ‘of a marmoset.’ Sagu is Portuguese for marmoset, and inus is Latin meaning ‘of or pertaining to.’ The second part of its scientific name geoffroyi, comes from the name of French naturalist Etienne Geoffroy Saint-Hilaire. This tamarin was named after him.

Along with being called a Geoffroy’s tamarin, this animal is sometimes referred to as the rufous-naped tamarin or the red-crested tamarin.

This animal belongs to the Callitrichidae family. They are in the same family as the marmoset. This animal is also in the Mammalia class.

A Geoffroy’s tamarin has a coat of black and tan fur on its back along with a red section of fur at the back of its neck and shoulders. This section of fur is what earned it the names red-crested and rufous-naped tamarin. Its tail is black with light tan rings, and its chest and front legs are white. The Geoffroy’s tamarin has black fur on its face and a thick stripe of white hair that stands up on its head. Some people say it has a white mohawk haircut. This creature has small, black ears and dark, curious eyes.

This animal is small, so it’s vulnerable to many predators. Fortunately, it has a few ways to protect itself. For one, this animal is fast! In fact, its fastest speed is 24 mph. Also, they stay up in the treetops most of the time to avoid predators on the ground. They alert other monkeys of predators by using chirps, whistles and clicking sounds. These animals also move their heads, tails and arms to alert others of a predator. Alerting other monkeys of a predator in the area gives everyone a chance to hide.

When it comes to people, these monkeys try to stay out of sight. But males can be aggressive with other males when competing for females during breeding season. Male Geoffroy’s tamarins can seriously hurt one another in a fight. Broken tails, deep scratches and injured claws are just a few examples of the injuries.

These creatures live in South America and Central America. Specifically, they live in Panama and Columbia. Their habitat includes dry deciduous forests as well as tropical rainforests. They stay in dense gatherings of trees, so they have plenty of places to hide. They live in a climate with moderate humidity.

As far as population goes, there are 4 to 6 Geoffroy’s tamarins for every square kilometer (about half a mile) in some areas of Barro Colorado Island in Panama. However, in other territories on the island, there are as many as 20 to 30 monkeys per square kilometer. The island itself is only about 9,600 acres in size. The number of these creatures in various areas depends on how these animals divide up their territories.

The conservation status of this animal is Least Concern. This animal’s population is believed to be decreasing with habitat loss due to deforestation.

These creatures live in South America and Central America. Specifically, they live in Panama and Columbia. Their habitat includes dry deciduous forests as well as tropical rainforests. They stay in dense gatherings of trees, so they have plenty of places to hide. They live in a climate with moderate humidity.

What do Geoffroy’s tamarins eat? They are omnivores which means they have both meat and plants in their diet. Lizards, insects, eggs, fruit, and flowers are all on the menu. Also, Geoffroy’s tamarins eat tree sap or nectar. Their teeth aren’t designed to dig into a tree’s trunk to find sap. So, they look for areas where sap is already leaking out of a tree.

Not surprisingly, the smallest monkey in Panama has a lot of predators. Wild cats, snakes, raptors such as hawks, and coatimundis are on the list of its predators. Many of its predators can climb trees as well which allows them to prey on these tiny creatures.

Sometimes a family of Geoffroy’s tamarins can turn the tables on a predator. These animals have been known to crowd around, or mob, a predator in order to chase it out of their territory. A mob could be a dozen monkeys or more. For instance, if a coatimundi, a raccoon-like animal, entered the territory of a family of Geoffroy’s tamarins, the monkeys may gather together in a mob to chase it away. Oftentimes, the predator will become overwhelmed and move away. Teamwork!

These animals also suffer from loss of habitat due to deforestation and the expansion of farmland. Some of these tiny creatures have been known to wander into urban areas and are killed on the road by cars.

The official conservation status of Geoffroy’s tamarins is: Least Concern. Many of these monkeys live in national parks located in Colombia and Panama. This provides them with some protection from habitat loss and capture by humans.

This animal breeds in the months of January and February. Female Geoffroy’s tamarins coil their tails to attract a male. Scientists have determined that some of these animals have one partner while others have several. In short, it varies from group to group. The gestation period for a female Geoffroy’s tamarin ranges from 140 to 145 days. Its gestation period is about the same as its close relative the cotton-top tamarin.

These creatures use a cavity, or hole, in a tree for shelter and as a nest to have babies. It’s a common occurrence for Geoffroy’s tamarins to give live birth to twins. A female marmoset has twins most of the time as well. Unfortunately, one twin may die within a couple months. The second baby may not be as healthy or strong as the first one. Newborn monkeys, also called infants, are born covered in mostly black hair with some white on their face. They weigh from 1.4 to 1.8 ounces at birth. A newborn that is 1.8 ounces weighs about as much as a tennis ball. They are nursed by their mother for the first couple months of life.

By 5 weeks old, the babies or infants are moving around and eating solid food by 7 weeks. The male Geoffrey’s tamarin shares in the care of the infants with the female. He carries the infants on his back and grooms their hair. It’s not unusual for older brothers and sisters in the family to help in the infant care as well. The infants are weaned by 18 weeks old and live independently at 25 weeks.

Geoffroy’s Tamarin in the Zoo

Geoffroy’s tamarins are on display at Philadelphia Zoo.

What is the scientific name for a Geoffroy’s tamarin?

The scientific name for a Geoffroy’s tamarin is Saguinus geoffroyi. The name means ‘of or pertaining to a marmoset.’ Though marmosets and tamarins are in the same family, there is a difference between them. A marmoset has teeth designed to dig into the trunk of a tree to release sap whereas a Geoffroy’s tamarin doesn’t have teeth designed for digging. They have to find sap that’s already coming out of the tree trunk.

What do Geoffroy’s tamarins eat?

Along with sap or nectar, their diet includes insects, lizards, eggs, fruits, and green plants. These animals are omnivores.

Where do Geoffroy’s tamarins live?

Geoffroy’s tamarins live in South and Central America. This includes Panama and Colombia. They live in deciduous forests and tropical rainforests high up in the treetops.

How big are Geoffroy’s tamarins?

These animals are very small. In fact, they hold the title of being the smallest monkey in Panama! They range from 8.5 to 11 inches long with a tail adding from 12 to 16.5 inches to their length. Male Geoffroy’s tamarins weigh 1 pound while females weigh a bit more at 1.1 pounds.

How long do Geoffroy’s tamarins live?

These monkeys can live up to 13 years in the wild. Of course, a Geoffroy’s tamarin living in a zoo is likely to live longer than 13 years because it isn’t under threat from predators. It will be well-cared for by the scientists and caregivers at the zoo.

What Kingdom do Geoffroys Tamarins belong to?

What phylum to Geoffroys Tamarins belong to?

What family do Geoffroys Tamarins belong to?

What order do Geoffroys Tamarins belong to?

What genus do Geoffroys Tamarins belong to?

What type of covering do Geoffroys Tamarins have?

Geoffroys Tamarins are covered in Fur.

What are some predators of Geoffroys Tamarins?

Predators of Geoffroys Tamarins include hawks, snakes, and wild cats.

What are some distinguishing features of Geoffroys Tamarins?

How many babies do Geoffroys Tamarins have?

The average number of babies a Geoffroys Tamarin has is 2.

What is an interesting fact about Geoffroys Tamarins?

Geoffroys Tamarins have distinctive V shape on their heads!

How fast is a Geoffroys Tamarin?

A Geoffroys Tamarin can travel at speeds of up to 24 miles per hour.