Click through all of our Crested Penguin images in the gallery. 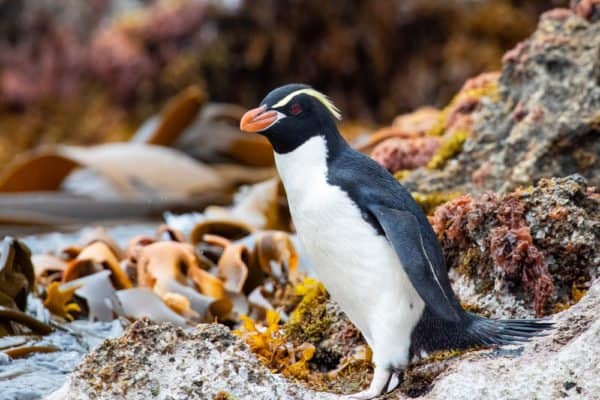 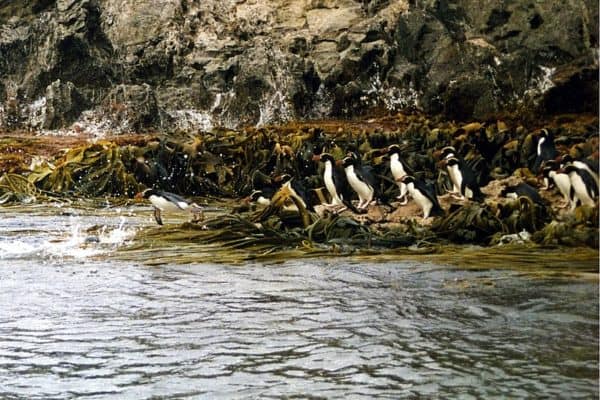 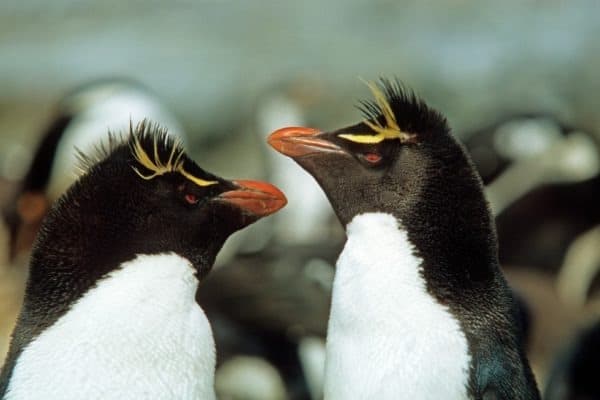 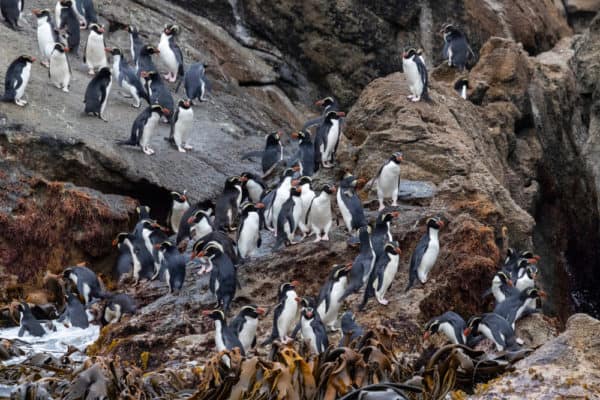 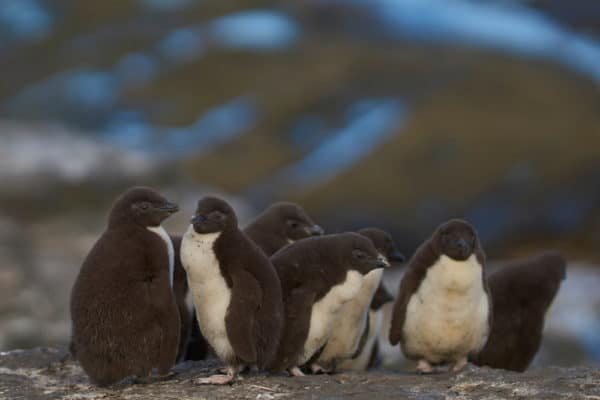 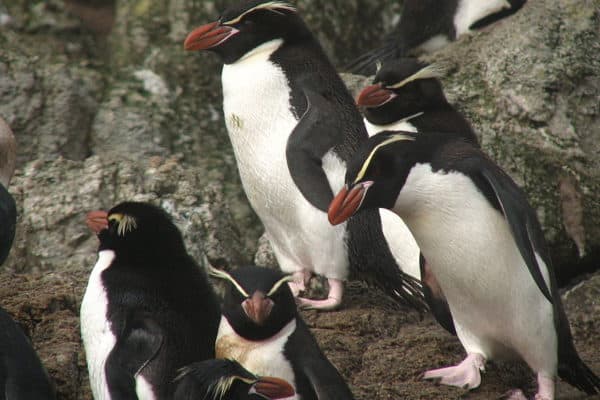 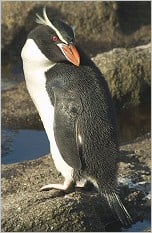 View all of the Crested Penguin images!

It lives in the watery areas off of a rocky Antarctic island named Snare Island, where it eats krill and other tasties. This penguin is one of six different species that live in the general area. The crested penguin is grey, yellow, black, and white. It lives as much as 20 years in the wild.

• The penguin eats krill, young squid, and other small animals that live in the water.
• It lives only on one island, near New Zealand.
• The crested penguin typically reproduces a single chick each year.
• They are preyed upon by orcas, leopard seals, and a variety of birds.
• These penguins live freely in various zoos in places such as Antwerp and Paradisio.

The scientific name of the crested penguin is the Eudyptes robustus. The name Eudyptes is based on the Greek words that mean “good diver.” The word robustus relates to how the penguins live, in a strong and robust manner. They are hardy and are able to live on their own in all kinds of environments, though they pair together to raise their chicks.

The crested penguin is a medium-sized bird that has an eyebrow of bright yellow feathers that run from both of its eyes back to the rear of its head. This is the same in both sexes. Other than that, while the sexes are very similar, the males tend to be slightly larger and to have a heavier mouth. The birds both have bright red eyes, but the eyes are not as red as those of the rock jumper penguin. Young birds tend to be less domineering, with a pale chin and a short crest. Both adults and juveniles have characteristic white stripes on the cheek and a bare white-pink stripe around the beak.

Although crested penguins seem very peaceful, the crested penguin gets into fights every year due to the need for new mates, both for young penguins to find a mate and for old ones who need a new mate. In these fights the bird is grabbed by the neck and beaten with the wings of the grabbing bird.

The crested penguin can make a number of vocalizations, ranging from hissing and explosive cries to rhythmical trumpeting and braying sounds that carry for a long distance when they are at sea. Despite all of this activity, much of the time these birds are indeed peaceful and well-behaved. The birds are not looking for a fight and generally they will settle down once the period of fighting is over.

The crested penguin lives in the sea and on land, depending on which part of the season it is in. Not much is known about the habitat of the penguin during the non-nesting season, though they have been seen on land in Tasmania, New Zealand, and other places. For the most part these penguins nest in dense colonies on coastal rocks or under the tree cover of the Olearia forests. In these places the penguins dig shallow holes and layer the bottom with grass, twigs, leaves, pebbles, or peat. They will then add a rim of mud to raise the level of the nest above ground level.

Once they have moved in the vegetation will die due to the heavy nesting activities, at which time the colony will move to a new nesting site. Colonies that nest near a stream may have an advantage over others because of the presence of water for drinking and bathing, but this isn’t necessary and many nesting colonies are located far from the water.

Crested penguins are preyed upon by a variety of large hunters, including orcas, sharks, and leopard seals. Their babies and eggs are threatened by petrels and skuas. They are not threatened by humans nor by any other known predators. They are protected by the government of New Zealand as a part of the effort to keep them invigorated and healthy.

Snares crested penguins will be able to breed somewhere in the range of five to nine years old. They start in early September and will breed sometime between then and January. When they breed the males will stand up on their hind feet and flap their wings in an effort to attract a mate. Crested penguins typically mate for life, so once they have found a reliable partner they will normally stick with him or her for the rest of their life. They meet up every year at the breeding place for penguins, and once they get together, they will be faithful to one another until they meet again the following year.

Once they have mated, the penguins will build their nests in the existing burrows in the rocks, then decorate it with whatever soft materials they can find. They use this nest to lay their eggs in, about one to three weeks after they breed. The first egg will be much smaller than the second egg and will likely not hatch. If it does, it is unlikely to survive.

Once both eggs have been laid, the parents will incubate them alternately for the first 10 days, then the male leaves to forage for the next 12 days to search for food. When he comes back the roles are reversed, and the female goes foraging while the male sits on the eggs.

When the egg hatches, the male sits on the eggs and guards them for the first three weeks, protecting the chick against all intruders while the female goes out and brings back food for the chick. Eventually, the chick will be guarded and fed by both parents. After the chick grows and molts, at about 11 weeks, the chick will be introduced to the water and left to make it on his own. Once the bird is on its own it can live 15 to 20 years, taking time to breed once it reaches between 5 and 9 years old.

The group currently consists of about 25,000 pairs. They appear to be holding steady at that number, or even growing slightly. However, it wouldn’t take much to drop them to nothing if a plague or other event were to hit, and for this reason, they are currently listed as vulnerable by the International Union for the Conservation of Nature. At this point, the penguin population could continue to grow or it could shrink, depending on how the penguins fare over the next few years. Potential threats include the introduction of a new predator, overfishing around the islands that could deplete their food source, pollution, or increasing water temperatures that drive prey away from the islands. For these reasons, the New Zealand government has taken action that will protect the marine feeding grounds and the Snares Island habitats to continue to protect these birds.

Is a crested penguin an omnivore, herbivore, or carnivore?

The crested penguin is a carnivore, eating nothing but meat throughout their lives.

Where does the crested penguin live?

The crested penguin lives on one of the small islands of the Snares Islands group. This is located near New Zealand and the Antarctic.

Why are erect crested penguins endangered?

How tall is a crested penguin?

What do crested penguins eat?

Crested penguins eat a variety of foods, but based on the contents of their stomachs they eat mostly krill. They also eat many different small fish, plus they eat a number of squid to round out their menu.

What is the lifespan of a crested penguin?

The lifespan of a crested penguin is anywhere from 15 to 20 years.

What Kingdom do Crested Penguins belong to?

What phylum do Crested Penguins belong to?

What class do Crested Penguins belong to?

What family do Crested Penguins belong to?

What order do Crested Penguins belong to?

What genus do Crested Penguins belong to?

What type of covering do Crested Penguins have?

Crested Penguins are covered in Feathers.

In what type of habitat do Crested Penguins live?

What is the main prey for Crested Penguins?

What are some predators of Crested Penguins?

What are some distinguishing features of Crested Penguins?

How many babies do Crested Penguins have?

The average number of babies a Crested Penguin has is 2.

What is an interesting fact about Crested Penguins?

What is the scientific name for the Crested Penguin?

The scientific name for the Crested Penguin is Eudyptes robustus.

How to say Crested Penguin in ...