In Japanese, the word koi sounds like the word for love. So the fish is a symbol of love among other good things.

Click through all of our Koi Fish images in the gallery. 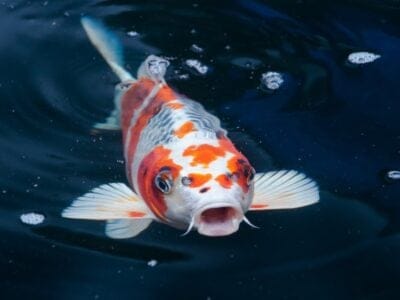 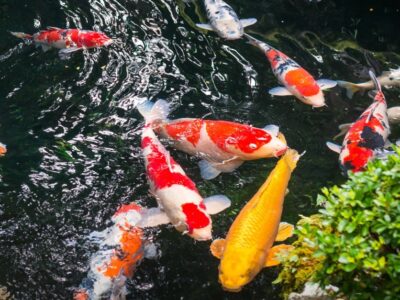 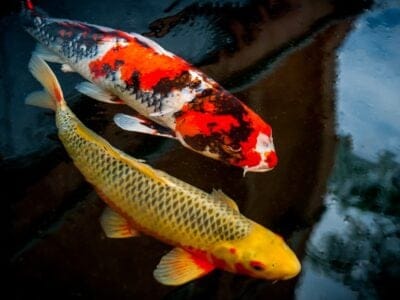 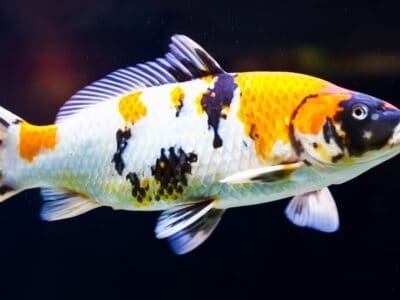 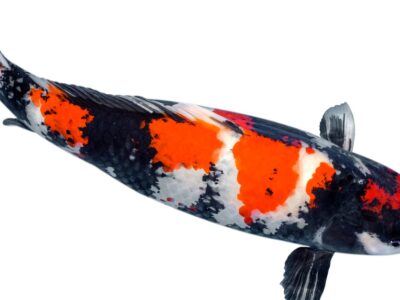 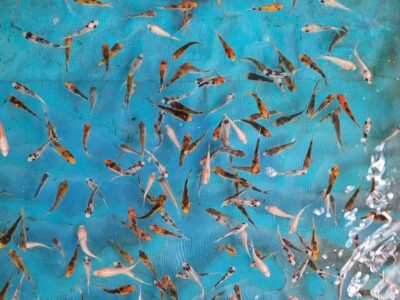 View all of the Koi Fish images!

The Koi is called “The Brocaded Carp”

The beautiful koi have captivated humans and brightened their ponds since at least the 19th century. People who have some money in the bank aren’t shy about paying great sums for a champion fish of noble lineage. There are at least 16 types of koi, each with its own pattern of colors. Moreover, each variety of koi has its own meaning, from wealth to good luck to love and friendship. Read on for more information about these remarkable fish.

Here are five facts about the koi fish.

A koi fish should be torpedo-shaped and symmetrical, with no defects in its conformation. It should be plump without being obese, and the paired fins should be the same shape and size. Like all carp, the koi lacks teeth but has a terminal mouth, which means it’s found at the end of its head. Since the fish is largely a bottom feeder, its mouth is inferior, which means it opens downward. Barbs are found at the edges of the mouth, which gives away the koi’s carp ancestry. The colorations of all types of koi fish should be rich and saturated, and white and silver scales should have a sparkle to them.

How Much Was the Most Expensive Koi Fish Ever?

The most expensive koi fish ever sold for $1.8 million. It was a female red and white koi fish named S Legend whose owner waited until she was nine years old to sell her. S Legend was 3 feet 3 inches long. She was prized for her perfection of form, her brilliant, perfectly distributed pattern of red and white coloring, and her lineage. She was a Kohaku variety of koi. Kohaku simply means “red and white” in Japanese and is one of the oldest koi types. She was sold to a mysterious Miss Yingying of Taiwan.

People around the world keep koi fish in their water gardens. They are also found in zoos such as the San Diego Zoo, Japanese gardens such as the one at the Brooklyn Botanical Gardens, and even garden centers.

Unfortunately, the brilliant coloring of koi fish makes them easy targets for creatures that wish to eat them. These range from wading birds like egrets, storks, and herons to small carnivores such as raccoons, foxes, and cats. This is why it is important for koi owners to maintain a pond that is too deep for a wading bird to stand in. The fish’s habitat shouldn’t have overhangs, such as a low bridge, that a carnivore can use to reach in and grab a fish. It should also be shaded. This not only hides the fish from birds of prey and other predators but protects the koi from sunburn.

Koi fish can enjoy an extraordinarily long lifespan. They can live more than two centuries, but all started life as tiny eggs.

Koi breed in the spring. Males start following females around the pond, and when he catches up to her he nudges her. This causes her to release her eggs, which can number in the thousands. He then fertilizes them. The eggs usually sink to the bottom of the pond, but they will stick to anything they land on.

Unfortunately, about a fifth of the eggs die or haven’t even been fertilized. The lucky ones hatch after about four or five days, but about a fifth of the baby fish die before they’re even an inch long. Some of them are even eaten by adults. At this point, breeders start culling the fish and save only the ones that look promising. The koi has a fast growth rate and might be ready to breed itself when it’s three to five years old.

Koi in Fishing and Cooking

Koi fish are treasured pets and are not fished, cooked nor eaten. Some live for so long that they are passed down as family heirlooms. However, the fish’s ancestor, the Amur carp, was raised for food. The fish started to be bred for ornamental purposes when genetic mutations caused some of the carp to develop patches of color on their scales.

As an ornamental breed, the population of koi is most likely in the hundreds of thousands if not more. It is now raised all over the world.

View all 29 animals that start with K

Where are Koi Found?

Koi are found in bodies of fresh water around the world, but they really got their start in Japan, where farmers started breeding them for their amazing colors.

Why are koi fish so special?

Koi fish are special because of their beauty, which is made by a plump but torpedo-shaped body and rich colors. They are also very long-lived and intelligent. They can recognize the people who feed them and can be trained to eat out of hand.

How much does a koi fish cost?

Eating koi is perfectly legal in most places, but people consider their koi pets and may have even paid a great deal of money for them. Not only that, even a carp that is raised for consumption doesn’t taste good.

How long do koi fish live?

Koi fish can live to be over 200 years old, but most live about 25 to 50 years, which is still considerable.

What do koi fish eat?

Koi fish are omnivores, so it is important that their owners give them a balanced diet. They are often fed nutritionally balanced pellets made of fish or blood meal fortified with wheat germ or soybean meal. Treats that koi can be given now and then include fruit such as grapes, strawberries, and watermelon, vegetables such as garlic, cauliflower, and broccoli, bits of bread, cooked rice, hard-boiled eggs, or cooked pasta. Koi should not be fed fish or bugs that the owner caught, corn or peas.