Canines up to 7 inches long! Click through all of our Saber-Toothed Tiger images in the gallery. 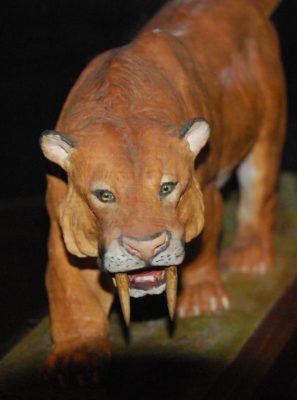 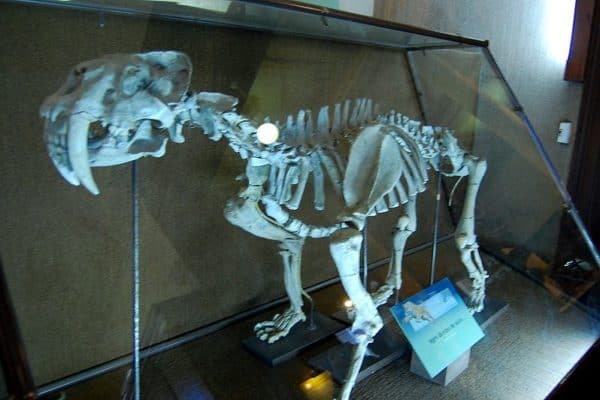 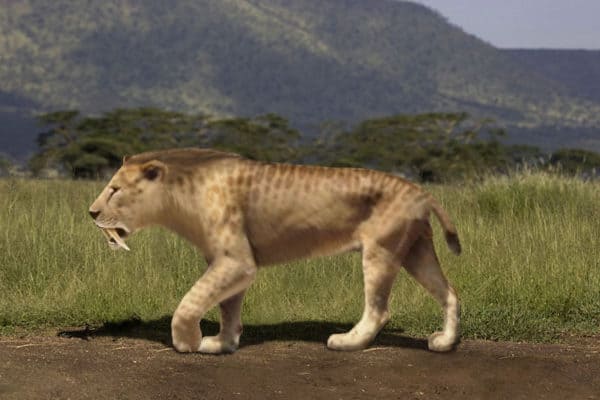 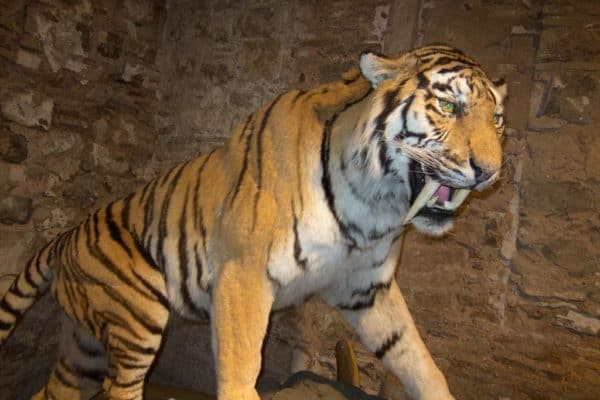 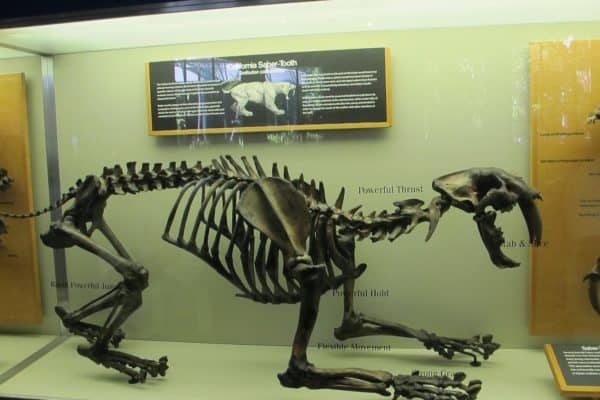 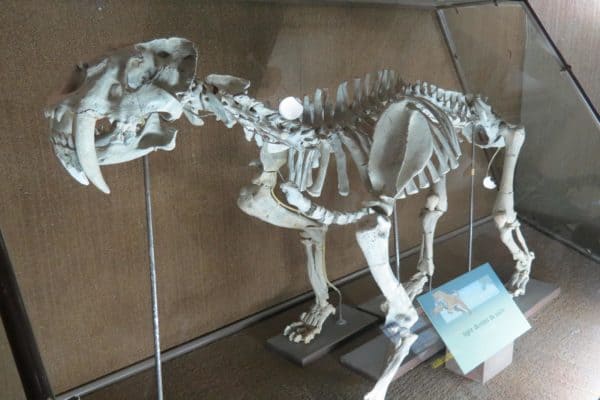 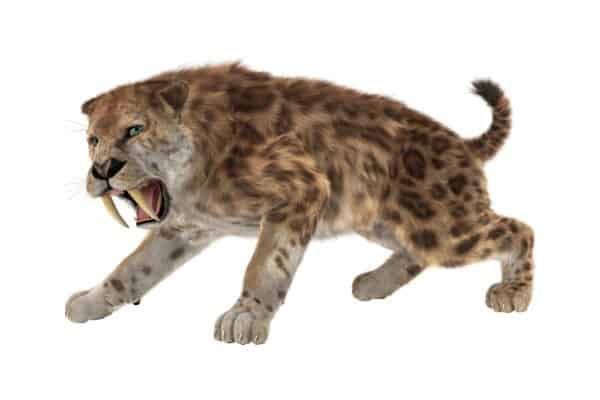 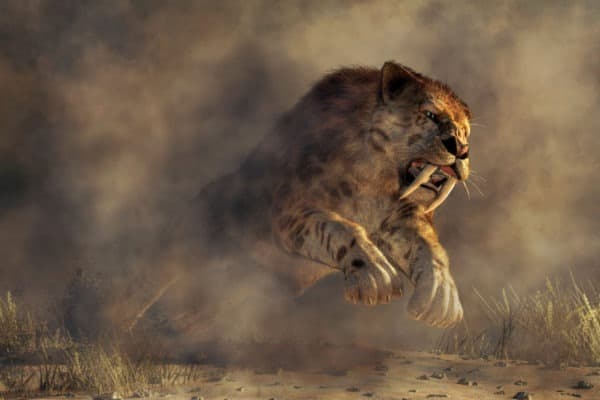 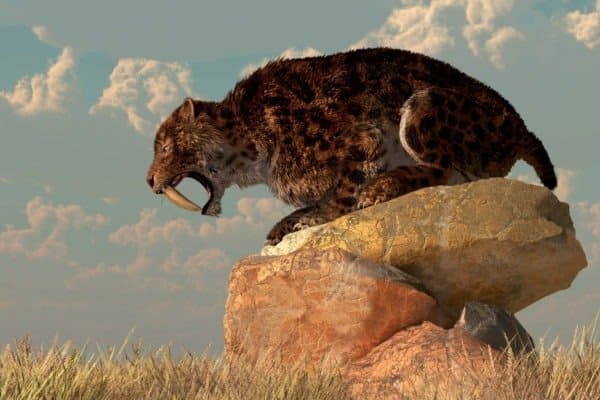 View all of the Saber-Toothed Tiger images!

“The most prominent feature of the saber-toothed tiger was its long, sharp, canine teeth. It would hide in the grass, lie in wait, and then pounce on its prey to deliver a fatal bite.”

The saber-toothed tiger roamed freely in the Americas from around 2.5 million years ago until the species went extinct around 11,700 years ago. It was an apex predator and killed large animals by hunting in packs. Even an American Mastodon that stood over 10 feet (3 meters) tall and weighed up to 12 tons (5,455 kg.) was not safe from this predator.

Its only true enemy was human beings. Human hunters and temperature changes are thought to have driven this animal to extinction.

The root definition of the name Smilodon means a two-edged knife combined with a tooth. This predatory mammal was named for its prominent canine teeth. The most well-known Smilodon is Smilodon fatalis, which most people call the saber-toothed tiger.

Here is the scientific classification hierarchy of the Smilodon:

The fossil record preserved only the bones, making the true appearance of this animal uncertain. It is likely that a saber-toothed tiger would have the coloration that allowed it to camouflage itself in the tall grass when waiting for prey. This means it could be brown, tan, white, yellow, or even black if it hunted at night. It might have been spotted to help with the camouflage.

The hunting strategy of this animal is probably like modern lions. It is theorized that they hunted in a pack with its pride. They likely wandered around to find an area with good prospects for a meal and then hunched down to stay perfectly still and wait for their prey to get close enough to pounce. This is predatory hunting by ambush style.

Research on the dental markings on the teeth of the saber-toothed tiger suggests that they did not eat many bones, so it is likely there was plenty of food supply available of easy-to-kill animals. Their attack method was to bite their prey with a deep gash in a vital area and then wait for the prey to bleed out.

The scientists concluded this because the large teeth could be easily broken if used to grab and hold. This creature could use its front claws and forearms to wrestle an animal down and then bite its neck to rip open its throat. Most of the saber-toothed tiger fossils found have their teeth intact so this led to the conclusion of using a fatal bite as the hunting method.

Their prey would be surprised by the attack and, with one or more bites from the group attack, be mortally wounded. These animals would then follow the prey as it tried to escape while bleeding profusely. When the animal lost enough blood it would collapse and die. Then, it was time for a meal. All the pride would eat together and a kill would be shared to also feed the older ones, ones too young to hunt, and any who were lame or sick.

We know this from the fossil evidence. The fossils show that many got old. Some recovered from injuries that would have prevented hunting, like broken bones. This meant another saber-toothed tiger helped them to get food during advanced age or recovery from an injury. They were vicious killers; nevertheless, they took good care of their own.

This creature lived in the areas where its prey lived. This included all the areas that plant-eating animals liked such as forests, shrubby areas, and grasslands. It must have employed the strategy of hiding near a watering spot to catch its prey unawares when the prey came up for a drink.

The habitat range was very wide. It includes all of the Americas from east to west and north to south. As this creature spread to South America from North America, its size increased creating the new species of S. populator as a descendant from the much smaller S. gracilis.

The impact of climate change on its ability to survive was very dramatic. They still had plenty of food but the food sources changed, when all the megafauna (large animals) disappeared.

Climate change affected the animals and also brought human migration. This double impact of temperature change that disrupted the habitat and the invasion of the humans was what combined to make this animal go extinct.

Studies of the fossil records of the saber-toothed tigers’ teeth indicate that they mostly ate large animals with thick skin and muscles, and then left the bones behind for some other scavenger. If they had eaten a lot of bones, this causes an identifiable wear pattern on the teeth, which the fossils of saber-toothed tigers do not have.

The diet of the saber-toothed tiger consisted of what it could kill through hunting, such as bison, camels, horses, woolly mammoths, mastodons (a now-extinct, huge, hairy elephant), and giant sloths, plus what it could scavenge from other predators’ kills such as antelope, capybara, caribou, elk, oxen, peccaries, tapir, and other smaller- to medium-sized animals.

It is likely, but not known, that saber-toothed tigers were seasonally polyestrous. This means the female could go into heat more than once during the breeding season. Each year, during spring, each fertile female would get pregnant by a dominant male she accepted. The males would fight each other over the females. The gestation period for a baby saber-toothed tiger was eight months. A typical litter of cubs was three.

A saber-toothed tiger had a very long lifespan of up to forty years if it did not run into humans.

It is not known exactly how many saber-toothed tigers existed. Certainly from the thousands found at the La Brea Tar Pits, there must have been many thousands, maybe millions. Their fossils have been found all over North America and South America. This indicates a vast animal population that spread out over a large territory over many thousands of years.

It is sad to think that humans were partly or mostly responsible for the elimination of this creature. However, it was a natural enemy of humans who had to defend themselves, or else they could become the saber-toothed tiger’s next meal.

Saber-Toothed Tiger in the Zoo

The saber-toothed tiger is an extinct mammal so it cannot be found in any modern zoo. However, there is an full scale, realistically-looking, animatronics (robotic) puppet that is a saber-toothed tiger in a show called Ice Age Encounters at the La Brea Tar Pits Museum. [Before going, be sure to check first to see if the museum is open, as it closed temporarily due to the pandemic.]

How did the saber-toothed tiger become extinct?

Research conducted by the Australian Centre for Ancient DNA concluded that the extinction of the saber-toothed tiger was likely caused by the warming climate at the end of the Ice Age and being hunted by humans. That is the most popular theory but nobody knows for sure.

Previously, it was incorrectly assumed that the saber-toothed tiger became extinct because the food supply ran out. However, there is no evidence that they were forced to eat more bones, which is what happens if the food is in short supply Eating more bones would show up in the fossil record as patterns on the teeth. But this did not happen. They changed what they ate, by eating smaller animals, but did not run out of food.

What is the scientific name for the saber-toothed tiger?

Where did saber-toothed tigers live?

The saber-toothed tiger lived in the Americas. The species of S. gracilis and S. fatalis lived mostly in North America. The S. populator species lived in South America.

When did the saber-toothed tiger live?

When did saber-toothed tigers become extinct?

A saber-toothed tiger was a predatory mammal with huge canine teeth that was a carnivore (meat-eater).

What Kingdom do Saber-Toothed Tigers belong to?

What phylum do Saber-Toothed Tigers belong to?

What class do Saber-Toothed Tigers belong to?

What family do Saber-Toothed Tigers belong to?

What order do Saber-Toothed Tigers belong to?

What genus do Saber-Toothed Tigers belong to?

What type of covering do Saber-Toothed Tigers have?

Saber-Toothed Tigers are covered in Fur.

What was the main prey for Saber-Toothed Tigers?

What were some predators of Saber-Toothed Tigers?

What were some distinguishing features of Saber-Toothed Tigers?

How many babies did Saber-Toothed Tigers have?

The average number of babies a Saber-Toothed Tiger had is 3.

What is an interesting fact about Saber-Toothed Tigers?

Saber-Toothed Tigers had canines up to 7 inches long!

What was the lifespan of a Saber-Toothed Tiger?

Saber-Toothed Tigers lived for 20 to 40 years.

What was the lifespan of a Saber-Toothed Tiger?

Saber-Toothed Tigers lived for 20 to 40 years.