The modern Spectacled Bear, which lives in South America, is related to the Short-Faced Bear! 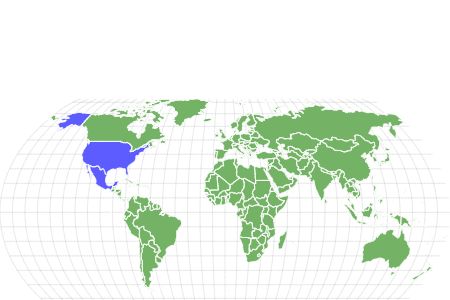 View all of the Short-Faced Bear images!

Ancient bears are some of the most fascinating creatures of the prehistoric world, and the North American Short-faced Bear was also one of the largest.

While they are known for having short faces, which resulted in their name, Short-Faced Bears were actually quite large. The Giant Short-Faced Bear, Arctodus simus, was one of the largest mammals of its day. It also tops the list of large omnivorous mammals of all time!

Arctodus belongs to the Ursidae family. This includes all bears, including both prehistoric and modern species. Their subfamily, Tremarctinae, has one remaining survivor, the Spectacled Bear. They are part of the Carnivora order, which includes Carnivores. Arctodus is part of the Mammalia class, Chordata phylum, and Animalia kingdom.

They could weigh 2,000 pounds or more. The males were probably larger than the females. Most specimens fall short of the 2,000-pound mark. But as more specimens are discovered, scientists start to believe that these large bears were more plentiful than previously thought.

They had short faces and snouts, giving them their name. It was very tall and large, although probably not as bulky as some other bears that have lived. They had very long limbs that were much longer and thinner than modern bears. This probably helped them to walk or run for long distances, although it wasn’t very helpful for short bursts of activity.

These bears had large molars and sharp front teeth like most other bears. This helped them tear into meat as well as grind up their food. Their powerful jaws made it possible for them to chew on bones to get to the savory marrow inside.

The two species, A. pristinus and A. simus, were very similar. A. simus was often larger but a large A. pristinus could often be the same size as a small A. simus. Their teeth and overall structure varied a little bit but not much.

Diet – What Did the Short-Faced Bear Eat?

Like many other bears, the Short-Faced Bear was likely an omnivore that favored meat. It had teeth that were sharp and large, perfect for eating meat. Some researchers believe that the Short-Faced Bear ate only meat while others think that it was an omnivore like most other species of bears. Because they were so large, these bears would have needed to eat a lot to maintain their size.

Because their legs and large size would have made it difficult for them to outrun prey, the Short-Faced Bears probably relied on other animals to do their hunting. They had a superior sense of smell. They could sniff out a new kill and use their large size to intimidate the hunter who would abandon their prey, leaving the Short-Faced Bear to enjoy a ready-to-eat meal.

The Short-Faced Bear lived during the Late Pliocene to the Holocene epochs, around 1.6 million to 11,000 years ago. They lived for a long time span, including when ancient humans started to live in the same areas.

These bears are known as North American Short-Faced Bears but they actually lived through a large territory. They preferred forests for the environment and the availability of food. At the time, the western parts of North America were heavily forested. Their remains have been found everywhere from Mexico to New Jersey. A. pristinus specimens are more plentiful in the eastern part of North America, especially in Florida. A. simus is more plentiful in the western areas.

The Short-Faced Bear also lived in the Yukon and present-day Alaska. The broad range of these bears contributes to the theory that they were opportunistic feeders that could survive on a variable diet.

Because they were so large and imposing, Short-Faced Bears didn’t face many predators. They could run for long distances and often quite fast. They weren’t as adept at turning quickly, however. This likely impacted the prey they could hunt, however, rather than making them prey for other animals.

There is at least some evidence that early humans interacted with Short-Faced Bears. A Clovis settlement in Texas shows that a Short-Faced Bear was butchered for meat by the people who lived there. Researchers think that the introduction of humans to the environment did not directly threaten the Short-Faced Bear’s survival. Instead, they would have competed for resources. This impacted the entire ecosystem and made it harder for these bears to get enough to eat.

Like other mammals, Short-faced Bears were born live. This would be a vulnerable time in the Short-Faced Bear’s life. As babies, they could have been eaten by other predators or had trouble surviving without adequate food of their own.

The first evidence of Short-Faced Bears was found in 1854 in South Carolina. Other notable discoveries, including the discovery of the large A. simus species, were made in California and even Mexico. Another discovery was made in 2008 by a farmer in Iowa who found a gigantic bone belonging to A. simus.

Some of the most well-known fossils of the Short-Faced Bear were found in California. The La Brea Tar Pits in Los Angeles preserved fossils and other remains. Today, there is a museum where visitors can see the excavation and research up close. They also have specimens on display.

A full skeleton of A. simus is on display at the Field Museum in Chicago. The museum houses an impressive collection of prehistoric specimens. Their displays include the largest T. rex on record, known as “Sue.”

The Short-Faced Bear went extinct between 11,000 and 10,000 years ago. While there was likely not one distinct event that caused their extinction, changing habitats and food sources contributed to their dwindling numbers and eventual extinction. The Quarternary Extinction Event at the transition from the Pliocene to the Holocene epoch led to a major shift in the Short-Faced Bear’s habitat and the entire ecosystem.

While humans did not hunt these bears to extinction, they probably played some role in the ecosystem at the time. They were in direct competition with the Short-Faced Bears for resources, including large meals like mammoths.

Amazingly, one relative of the Short-Faced Bear actually survives today. The Spectacled Bear is the only member of the Tremarctinae subfamily currently in existence. It lives in South America.

Similar Animals to The Short-Faced Bear

Some prehistoric and modern-day bears share similarities with the Short-Faced Bear. These include:

When did Short-Faced Bears live?

The Short-Faced Bears lived during the Late Pliocene to the Holocene epochs, around 1.6 million to 11,000 years ago. They went extinct sometime between 11,000 and 10,000 years ago.

How big was a Short-Faced Bear?