They can break off part of their tail, but it will not grow back.

Click through all of our Mexican Mole Lizard images in the gallery. 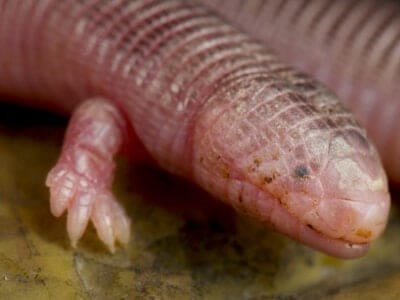 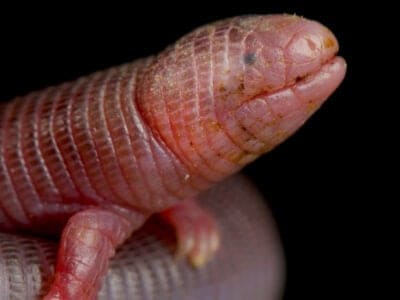 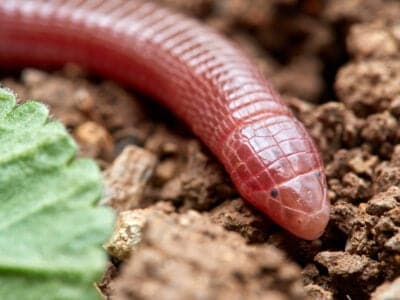 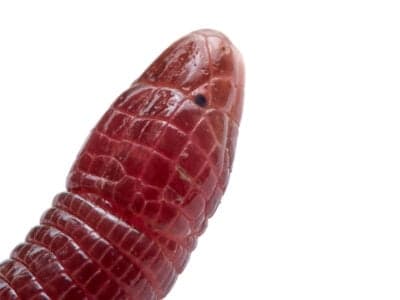 View all of the Mexican Mole Lizard images!

“A species of lizard that looks like a worm”

Mexican mole lizards are also called five-toed worm lizards. They are odd-looking and fascinating. They are a burrowing reptile species. They spend most of their time in underground burrows. Due to their appearance, they are sometimes mistaken for a snake. This makes some humans fear these harmless critters. There is also an old legend that causes people to be afraid of them. It is said that these lizards would come up through the toilet and attack people. This silly myth is, of course, not at all true. It wouldn’t even be possible for them to get into a toilet in the first place.

The Mexican mole lizard’s scientific name is Bipes biporus. It is also called the five-toed worm lizard. The reason for this name is that it is a type of worm lizard (Amphisbaenia) with five toes on each foot. It is sometimes referred to as just “bipes” also. It is in the Animalia kingdom, the Chordata phylum and the Reptilia class. It is of the Squamata order and belongs to the Bipedidae family. The genus is Bipes. The word “Bipes” means two-footed. It is derived from the Latin word “bi” meaning two and “pes” (ped) which means foot. The scientific name “biporus” also uses the Latin “bi” stem and the word “porus” meaning pore or passage in Latin. The origin of the common name “Mexican mole lizard” is that this lizard burrows like a mole and is native to Mexico.

This lizard looks similar to a worm. Its body is segmented and cylindrical. It has a long tail. It has two forelimbs with claws that it uses to dig into the soil. Its head is round and blunt. The colors can vary slightly from pale pink to bright pink. Sometimes the colors can be more gray-toned than pink. The colors are usually very light due to the lack of melanin from living underground. Its weight is typically about three ounces. That weight is equal to half the weight of a billiard ball. The five-toed worm lizard’s size is fairly small. It is between 18 and 24 centimeters long from head to tail. It is only six to seven millimeters in width. Its size in length is about equal to between one-half to three-fifths as tall as a bowling pin. Its width is four times as wide as a strand of spaghetti noodle.

This species has evolved from having a set of back legs to losing those and only presenting forelimbs. The reason for this adaptation is unclear, though it may make it easier to squirm through burrow tunnels.
Mexican mole lizards are diurnal. They are most active in the daytime, although they will emerge from their burrows at night. They are not aggressive and seem to be shy, hiding underground most of the time. To get away from predators, they have the ability to break off part of their tails. The downside to this is that it is not regenerative and cannot grow back. Once it is gone, it will not regrow like some species. The tail can also move separately from the limbs.

The Mexican mole lizard lives on the continents of North America and Central America in the country of Mexico. It is native to the Baja California Peninsula. It can be found in the territories of Baja California, Baja California Sur, Guerrero, and Chiapas. It is a terrestrial species that live in desert, shrubland, and dune habitats. The regions it occupies have tropical, Mediterranean, and arid climates and are Nearctic and Neotropical biogeographical regions. This lizard spends its time burrowed in loose soil at depths between two and a half to 15 centimeters. Because it spends most of its life underground, it is hard to spot one of these lizards in the wild.

The five-toed worm lizard is a carnivore. It is a very opportunistic hunter. It will eat nearly anything small and pliable enough in its environment. The main diet staple is insects. The lizard will grab its prey with its claws and pull it underground to devour it.

The full range of predators to this animal is not well studied. However, they are preyed upon by serpentine species. Because this species is not often seen, some facts remain unknown.

Luckily, this species does not face many serious threats. Other than natural predators, humans are the only other known danger to Mexican mole lizards. Construction and excavation for agricultural and urban development can cause harm to their ecosystem. They have proven to be quite resilient to this threat, however, simply burrowing deeper away from the hazards. They are also sometimes mistaken for snakes and killed for this reason.

The IUCN (International Union for the Conservation of Nature) Red List classifies this species as least concern due to their generous population and extensive distribution. They are protected under Mexican law and NOM (Normas Oficiales Mexicanas) regulations. NOM is a Mexican organization that regulates trade and exports.

What eats the Mexican Mole Lizard?

Snakes eat the Mexican mole lizard. They often share the same habitat and can easily capture and kill them, especially if they are bigger than the lizards. They are the only known predator to these lizards. Although, they are probably eaten by other animals as well.

What does the Mexican Mole Lizard eat?

The Mexican mole lizard mostly eats ground-dwelling insects and larvae. It will also eat small lizards. Some choice items on the menu for this reptile include earthworms, crickets, ants, termites, and cockroaches as well as the larvae of these insects.

Not much is known about the mating rituals of this elusive species. There are a few established reproductive facts about these lizards though. They reproduce sexually in the summer around the month of July. They typically only reproduce as often as once in a two-year period. They breed and lay their eggs in the soil underground. The female lays two eggs on average but can lay one to four. It takes about two months for the eggs to hatch.

When the eggs hatch in September, the baby lizards weigh less than one ounce. The hatchlings already know how to burrow and are most likely somewhat independent because of their ability to move around on their own.
The normal lifespan for these lizards is between one and two years. The oldest recorded was a little over three years old and lived in captivity.

There is not a specific number estimate for the population, although it is believed to be extremely abundant and stable. There is no threat to the decline of this species. They are of least concern on the IUCN Red List because there is no foreseen danger of extinction any time in the near future.

What does it mean for a Mexican mole lizard to be specialized?

It means the lizard is exceptionally good at a certain skill or ability. In this case, the Mexican mole lizard is specialized in digging into soil and burrowing.

What do Mexican mole lizards eat?

Is the Mexican mole lizard rare?

No, the Mexican mole lizard is not rare. In fact, researchers presume that there is a very large population. It is just not observed much due to its elusive nature and spending its time hidden underground.

Yes, they are carnivores. They only eat animals.

How big is the Mexican mole lizard?

It is 18 to 24 centimeters long and weighs about three ounces.

Is the Mexican Mole Lizard a reptile?

Yes, it is a reptile.

No, they are not poisonous and are safe to handle.

How many legs does a Mexican mole lizard have?

The Mexican mole lizard has two legs. They are located on the front section of its body, near the head.

Can you have a Mexican mole lizard as a pet?

It would be hard to find one for sale because they only live in Mexico and are not sold at pet stores. It would not be encouraged to keep one as a pet since they are protected wildlife.