The female mouse spider is rarely seen because they don't leave their burrows. 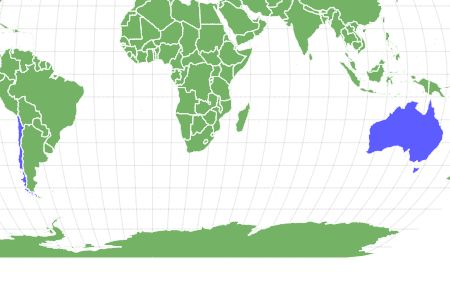 View all of our Mouse Spider pictures in the gallery.

View all of the Mouse Spider images!

Mouse spider is the common name for spiders in the Missulena genus. They are ambush predators that are frequently mistaken for funnel-web spiders. Female mouse spiders are rarely seen because they spend their entire lives in their burrows. Although mouse spider bites are uncommon, the spider is venomous. This spider mostly preys on insects, but they may sometimes eat other small animals. Most species of this spider are found in Australia, but one species is native to Chile.

Mouse spiders belong to the genus Missulena. The genus has about 11 species, all native to Australia (except one native to Chile). They are actinopodids (family Actinopodidae). This is a family of burrowing spiders commonly referred to as trapdoor spiders because they tend to burrow into the soil and build trap doors to help catch prey.

The common name “mouse spider” refers to this spider’s presumed ability to dig deep burrows similar to mice burrows. This has been found to be inaccurate. Although mouse spiders can indeed burrow, their burrow is different from mouse burrows. The mix-up with mice probably happened because someone claimed to have found a spider in a deep burrow that belonged to a mouse. Mouse spiders are alleged to be able to prey on mice, and the larger females also look like mice.

The most common mouse spider species include:

Scotophaeus blackwalli, a smaller-sized and obviously unrelated spider species, is sometimes called a “mouse spider,” too.

Appearance — How To Identify Mouse Spiders

Typically brown or black, mouse spiders have a glossy carapace with large, shiny heads. They’re medium to large-sized and tend to have thick, stocky legs. Color and appearance may vary slightly from one species to the other. The male red-headed mouse spider (Missulena occatoria) is brownish with distinct reddish-tinged jaws. On the other hand, the male eastern mouse spider (Missulena bradleyi) has a blue patch.

All species have their eyes arranged in the front region of their head. The eyes are typically spaced out rather than clustered. In all species, the head is typically broad and shiny.

Female mouse spiders have a fused head and thorax (cephalothorax). Their abdomen is covered in fine, sparse hair with a brownish hue. They are more robust and may measure up to 1.18 inches in length. In contrast, the male mouse spiders measure just 0.8 inches. They have long legs and pedipalps (an extra pair of limb-like appendages found in male spiders). Both male and female mouse spiders have short spinnerets (shorter than most large black spider species). However, the spinnerets in females are typically short, with the last segment domed and button-like.

Habitat — Where To Find Mouse Spiders

Although one species (Missulena tussulena) is found in Chile, most mouse spiders are native to Australia. People often encounter them in semi-arid forests or open shrublands. The range of their habitat varies slightly between the different species. The red-headed mouse spider has the most widespread distribution. Unlike many other spider species, the spiderlings of the red-headed mouse spiders are dispersed aerially by ballooning instead of walking. This allows them to spread over several kilometers. The species is found in most of mainland Australia.

The eastern mouse spider can be found throughout eastern Australia from Queensland to Victoria. The northern mouse spider has a more limited range, and it is only found in tropical north Australia.

Missulena species live in burrows that serve as a breeding ground and a place of refuge from predators and harsh weather. The burrows can range in depth from eight to 21.6 inches. The construction of the burrow tends to vary from one species to the other. Experts are more familiar with the burrowing habit of red-headed mouse spiders.

They build deep burrows with wide entrances. The rest of the burrow shaft narrows into a bottom chamber area. They also create a side chamber extending from the main shaft. The entrance to the burrow is typically covered with two surface trapdoors, a distinguishing feature of burrows made by this species of spider.

The trapdoors are wafer-thin, which makes them hard to detect. Silk is also used to make trip lines that are extended from the burrow’s entrance to the chamber so the spider can tell when a potential prey or predator is close to the burrow. Male mouse spiders frequently leave the holes in search of mates. On the other hand, the female spends most of her life held up in her burrow.

Spiders evolved from aquatic chelicerate ancestors (subphylum Chelicerata). Other members of this subphylum include sea spiders and horseshoe crabs. The arachnid group branched out roughly 400 million years ago.

The development of book lungs for respiration and walking legs supported the evolution of spiders into ground-dwelling species. Before the present-day spiders (true spiders) evolved, other arachnids with similar characteristics existed on land. They include the trigonotarbids.

The oldest true spider fossil dates back to the Carboniferous Period (about 300 million years ago). This ancient spider had spinnerets at the center of its abdomen rather than at the end, like most spiders today. They also didn’t spin intricate webs to catch prey. Instead, they hunted prey directly. Spiders with the ability to spin traps evolved about 250 million years ago.

Mouse spiders are close relatives of the Australian atracine spiders (family Hexathelidae). Members of this family are ranked among the most venomous spiders in the world. Scientists believe mouse spiders branched off from this family about 200 million years ago.

Diet — What Do Mouse Spiders Eat?

Mouse spiders mainly feed on insects, tiny animals, and other spiders. Some people believe they may attack and prey on mice, but there’s no conclusive evidence.

They hunt prey but rarely out in the open. Instead, they wait in their burrow for unsuspecting prey to get caught in their intricate trap door. The double trapdoor of some species helps them to catch prey more effectively.

The mouth of the mouse spider is equipped with a chelicera. This is a pair of fangs that also serve as jaws). The mouse spider is venomous, and it uses its venom to immobilize and kill prey. Mouse spiders mostly kill insects, but their diet may include ants, beetles, tiny reptiles, and frogs.

Although it is rare, male mouse spiders have been seen foraging outside their burrows to ambush prey at night. They can detect the subtle movements of insects approaching within striking distance and are extremely sensitive to vibrations.

Wasps, bandicoots, centipedes, and scorpions are some of the mouse spider’s main predators. While females are relatively safe in their burrows (unless flooding unearths them), males are frequently attacked when they emerge from their burrows.

But mouse spiders are not defenseless. Although they’re not aggressive, the mouse spiders’ strong fangs help them fend off an attack by larger predators. When threatened, they have a reputation for taking an attacking stance.

Prevention — How To Get Rid of Mouse Spider

To keep spiders away, it is advisable to tidy your environment to keep spiders and other insects out of your home. This will also keep the mouse spiders out. When gardening outdoors, you should take extra care. You can keep spiders from entering by sealing holes and crevices that the spider may enter through.

If you suspect you have a venomous spider in your home, you should contact a pest control professional or use a commercial pesticide that contains some sort of pyrethroid to spray crevices and corners.

Mouse spiders are venomous and considered dangerous. However, they rarely attack humans unless they are disturbed, and they are known to deliver dry bites, which is not so dangerous to humans.

How many legs does a mouse spider have?

Like all spider species, mouse spiders have eight long legs.

How do you identify mouse spiders?

Mouse spiders are mostly black or brown, or blue. They are medium-sized with bulbous heads and jaws. They also have a shiny carapace with eyes spread out across the front portion of their carapace.

How do you get rid of mouse spiders?

You can use natural homemade repellents made from a mix of vinegar and water to get rid of mouse spiders. Insecticides or pesticides can also help get rid of them. Generally, it is best to keep them out by sealing possible entry posts. Calling a pest control expert is the best option if you find a spider in your home.