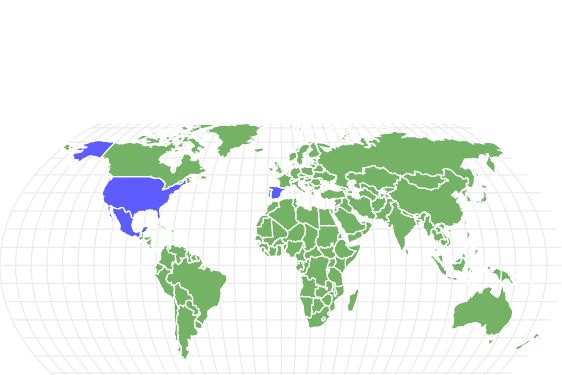 View all of our Spanish Goat pictures in the gallery.

View all of the Spanish Goat images!

Spanish goats are compact size goats that have long, horizontal ears with thorns that twist at their points.

The hair on their coats is varied in length, though it is a blend of several neutral colors. The purpose of these goats is milk production (though it is simply to create cheeses from this source as well) and to use them as a source of meat.

These goats are herbivorous and can breed all year. They also are called wood goats, hill goats, and briar goats. They don’t stand very tall, but they prefer to pair up, rather than living alone. These goats are also called the brush goat or the scrub goat.

Spanish goats go by the scientific name Capra aegagrus hircus. The class is called Mammalia, the kingdom is Animalia, and the phylum is Chordata. These goats also go by the names wood, hill and briar, brush, and shrubs in different parts of the world.

The phrase “Capra aegagrus” refers to a wild goat, while the word “hircus” is likely a description of the “shaggy” coat of the goat.

The Spanish goat (a.k.a. the brush goat) has fairly long ears that lay horizontally. The ears are close to the goat’s head and run along its face. The body is large but is still compact with a good meat conformation.

The Spanish goats have a variety of hair colors and the color is often not limited to a single shade, While some goats are black and white, others have different shades of brown. Their horns are long and are known to swoop up and outward. Their horns also tend to twist a little at their points.

Talking about the coats of a Spanish goat, the hair can be both long and short depending upon the goat itself. Some varieties also produce a heavy, desirable, cashmere coat, which is part of the reason that it was assigned this scientific name.

The bucks or the male goats weigh around 200 to 250 pounds while the female goats weigh around 100 to 150 pounds. The bodies, due to being compact, reach only about 20 inches in height. These goats are used for meat as well as milk production that eventually helps in the making of different kinds of cheeses.

Spanish goats are herd animals which means that they love staying in groups. They do not do very well alone and are typically not very social with humans, which is why it can often be difficult to handle them. This is also the reason that they are not usually domesticated around the world.

These goats are not as domesticated as others, so it may be difficult for the goat herders to handle them. It is often said that it can be difficult to catch them for grooming purposes. The Spanish goat is a very hardy animal and can survive in different as well as difficult environmental conditions. They can also breed out of their usual season and make an excellent range of animals.

Spanish goats do need housing and wood fencing needs just like other goats. However, they are hardy, and that hardiness makes them less fragile than other goat breeds. If they are under human care, a less elaborate shelter would be needed for them. That said, it is clear that they come with their own set of pros and cons.

This goat breed is known to be great climbers and jumpers. You would have to choose a wood fencing that is at least 4 feet tall to make their shelter. Other than that, you can also use electric fencing. The purpose of these goats is the production of meat and milk.

The Spanish goats, brush goats, or scrub goats originally came from Spain via Mexico to the USA. But now, the Spanish goats are widely found in the United States of America. Locals typically use them as a source of meat and to clear brush.

Spanish goats or scrub goats are herbivorous and usually feed on grass, herbs, shrubs, weeds, tree barks, and leaves. However, if they are under human care, their feed would have to be increased right before the breeding season. This would help promote a strong as well as healthy breeding season for these goats.

During pregnancy and after childbirth, the Spanish goats require a lot of minerals, feed, and freshwater. This is important for the care of the mother goat. If she is not healthy, she cannot take care of her baby at all.

They also need extra supplements during the time of their pregnancies. However, that does not mean that they need to be overfed during their pregnancy as that can lead to several other health issues for the Spanish goats.

The predators of this goat breed are much like those of other goats as well. This includes domestic dogs and some other canine species like foxes, wolves, and coyotes. Apart from that, they face threats from humans who kill them for meat and other things that the goat provides.

Keeping them has its pros and cons. They are also prone to several health problems that could include parasitic infections which these goats are resistant towards but are not immune to. If they are kept under human care, it would be great to practice a deworming routine around them for their betterment. Also, the conditions that they are kept in should be healthy and hygienic.

Having its own set of pros and cons, this goat breed is known to be polyestrous. This means that these animals can be bred year-long and can have multiple breeding sessions. It has been said that the Spanish goats can breed up to three times in two years.

The Spanish goats are known to handle their pregnancies and childbirth very well. They can give birth to their babies with little human assistance. Once the baby is born, the female goat continues to mother and care for their children extremely well. The male goat is often not a part of this process.

The Spanish females are known to be prolific and can produce enough milk to be good nourishment for their babies.
Spanish goats are mature even at five months of age, but it is always wise to wait until they are about eight months to a year old until they can finally be bred. In human care, one should wait until the female is about 80 pounds before she is bred. This would be safer for her and the kids.

They are also often crossbred with other goats to increase the toughness of their offspring. However, this has led to a reduced Spanish goat population over the world. The lifespan of these goats is about six to seven years.

What is a Spanish goat?

Spanish goats are compact size goats. They have long, horizontal ears and thorns that twist at their points. They do not stand very tall but have a good meet conformation.

How big do Spanish goats get?

The bucks weigh around 200 to 250 pounds while the does weigh around 100 to 150 pounds. The bodies, due to being compact, reach only about 20 inches in height.

How much does a Spanish goat cost?

The purebred could cost about $300 to $350. But the pure breeds are rare which is why the actual cost must be lesser. These goats are also called wood, hill, briar, brush, and scrub in different parts of the world.

What are Spanish goats used for?

How much milk does a Spanish goat produce?

While the exact quantity is not known, the Spanish goats produce enough milk for human use and its babies alike.

Are the Spanish goats carnivores, herbivores, or omnivores?