It’s the only macropod that lives in trees.

Click through all of our Tree Kangaroo images in the gallery. 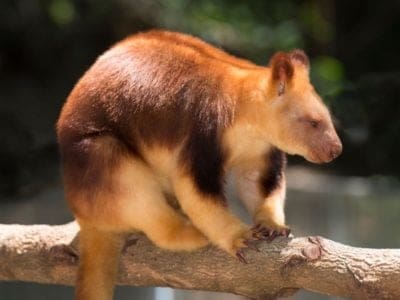 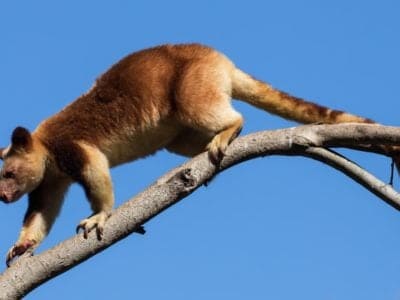 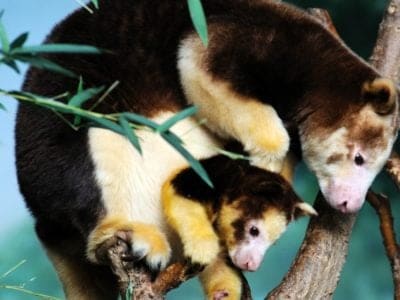 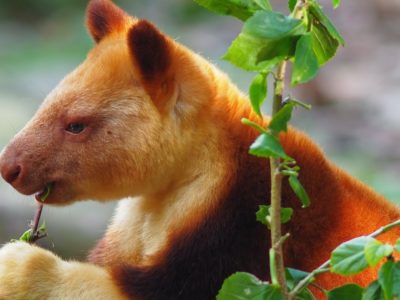 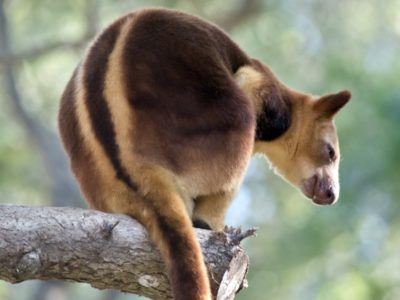 View all of the Tree Kangaroo images!

“The Tree Kangaroo is a kangaroo made for life in the trees.”

The tree kangaroo is the only macropod known to live in trees. A macropod is a kangaroo or one of its relatives. These animals are found in the tropical rainforests in Queensland, Australia, New Guinea, and some nearby islands.

Because they live in trees, these animals have evolved a bit differently from their terrestrial cousins. Their tails, for one, are much longer and thicker than the tails of land kangaroos to provide balance as they move through the trees. The tail is often longer than the animal’s body. Instead of coming to a point like the terrestrial kangaroo’s, these animal’s tail is cylindrical and often bushy. Their nails are also longer and have more of a curve so they can better hold on to tree branches and tree trunks. Like other kangaroos, they have powerful hind legs, but these legs allow them to leap between trees or even jump from heights of 59 feet without injury.

These animals belong to the Dendrolagus genus. “Dendro” is Greek for tree, and ”lagus” is Greek for hare, so the tree kangaroo’s scientific name translates into “tree hare.” There are about 15 species, though some scientists believe that one or two may be already extinct. They are:

Though their scientific name means “tree hare,” these animals look and act nothing like hares. Their ears are short, their tails are very long, and their bodies are stocky and often covered with thick, beautifully colored, and pattered fur. The warmth and beauty of their fur make them targets for poaching. Their heads are small relative to the rest of their body, their back feet are long and wide and clawed, and their fourth toe is the longest toe.

These animals are usually solitary. Adult males and females only come together to mate, and the strongest bond is between a mother and her baby, who spends many months in her pouch. Once in a while, a person will see a mother, baby, and a male.

The territory of a male can contain the territory of a few females, which made some biologists believe that males kept harems. This isn’t the case, for after breeding males and females don’t have much to do with each other. Males might also fight over females and will defend their territories if a stray male wanders inside it.

Some of these animals are less agile at tree climbing than others. The grizzled species, for example, always heads down when it’s fleeing danger. Hunters take advantage of this by grabbing the fleeing animal by the tail.

What does the tree kangaroo eat?

These animals usually eat tree leaves. They graze every four hours or so during sessions that last for about 15 to 20 minutes. They can also eat fruit, flowers, moss, insects, bird eggs, baby birds, tree sap, and tree bark. In zoos, they are fed tea leaves to help maintain the beautiful colors of their fur.

The mature leaves the animal eats may contain toxins, and if the toxins become too concentrated, it can injure the animal. At one point Lumholtz’s tree kangaroos seemed to be going blind. It was speculated that because of an unusually dry season the toxins in the leaves that they ate became concentrated and led to the animal’s blindness and confusion. Others claimed the disorder was the result of a virus. Neither overly toxic leaves nor a virus was ever proven.

What eats the tree kangaroo?

People eat these animals. For example, for the people of Papua New Guinea’s Torricelli Mountains, the tenkile is a staple. It’s not only hunted for its meat but for its plush fur and for the pet trade. Unfortunately, it has not only been over-hunted but logging is destroying its habitat. Because of this, the tenkile is critically endangered.

Besides humans, the amethystine python also hunts and eats these animals. Like the tree kangaroo, this python, which can be over 28 feet long, is adept at climbing and living in trees. Birds of prey may also hunt these animals.

Humans are the main predators and threat to these animals, to the point where nearly all known species are in decline. Natural predators include birds of prey and tree-dwelling snakes. They are also subject to bacterial infections, but these infections don’t seem to be contagious. It is possible that these marsupials are subject to heart conditions, as one grizzled tree kangaroo is known to have died of calcified arteries.

The reproductive strategies of most of these animals are little known, but most species seem to be polygynous, which means the males mate with many females. Some of the species breed year-round. The male grizzled tree kangaroo softly clucks at a female and gently touches her until she allows him to mate. The mating of two Lumholtz’s tree kangaroos can be a bit raucous. The female Matschie’s tree kangaroo approaches the male, and they touch noses. She resists him until she doesn’t, and copulation can last for an hour.

The female is pregnant for only 44 days. When she feels it’s time to give birth, she hides away, sits on her tail with her tail between her legs, and waits. Soon she gives birth to a tiny, fetus-like joey that crawls up her fur to the pouch, where it latches onto a teat. The joey remains there unseen for over five months before it pokes its head out of the pouch. During that time the mother cleans her pouch and the joey. At around seven months, the joey finally leaves the pouch but does not permanently leave until it’s around 10 months old. Even then, it will continue to nurse. Here’s a baby Bennett’s tree kangaroo with its mum.

These animals live about 15 to 20 years on average, but the oldest known lived 27 years and is still alive as of this writing.

The population of these animals in Australia and New Guinea is declining, though they are found in zoos all over the world. While it is difficult to claim how many of these animals of any species are left in the wild, the ones in the best shape, such as the dingiso, are still endangered. The dingiso is different from other tree kangaroos because it doesn’t spend a lot of time in the trees, and it is protected by the Moni people of Papua Province, who revere it as an ancestral spirit.

View all 36 animals that start with T

Tree kangaroos are a kind of kangaroo in that they belong to the genus Macropodidae. They stand up on their hind feet, which are unusually long and narrow. Their back legs are powerful with an especially long, strong fourth toe, and their second and third toes are largely fused together until the very tips, where they have separate nails. Their tails are also heavy and long and used for balance. They hop if they want to move quickly, and they are marsupials. This means they have a pouch for their babies, who, with the exception of Matschie’s tree-kangaroo, also undergo embryonic diapause. This means the embryo waits a while after fertilization before it implants in the mother’s womb.

From what biologists can tell, tree kangaroos are secretive and tend to keep to themselves. Males will see other males off their territory, and they might squabble if there is a female present. They seem to tolerate humans well enough, even if they’re caught and forced to wear critter cams.

How many tree kangaroos are left in the world?

Tree kangaroos are indeed endangered due to habitat loss and hunting.

What are 3 interesting facts about tree kangaroos?

What do tree kangaroos eat?

Tree kangaroos eat the fruit and the leaves of the trees they live in, but they have grains, nuts, tree sap, and bark as part of their diet. They’ll also eat eggs, nestlings, and what has fallen to the ground.

Where do tree kangaroos live?