It communicates with head movements, color and dewlap Colour
Skin Type
Scales
Top Speed
6 mph
Lifespan
On average 2-3 but up to 8 in the wild, 4-7 years in captivity
Weight
2-6g
Length
4-8cm (1.5-3.1in)
Age of Sexual Maturity
8-9 months
Age of Weaning
None, the eggs are left to incubate underground and hatch by themselves

Click through all of our Green Anole images in the gallery. 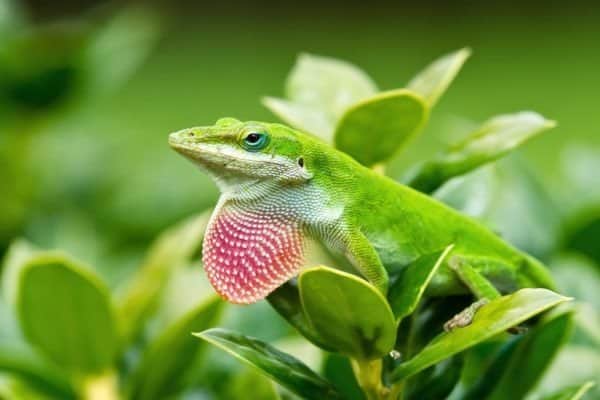 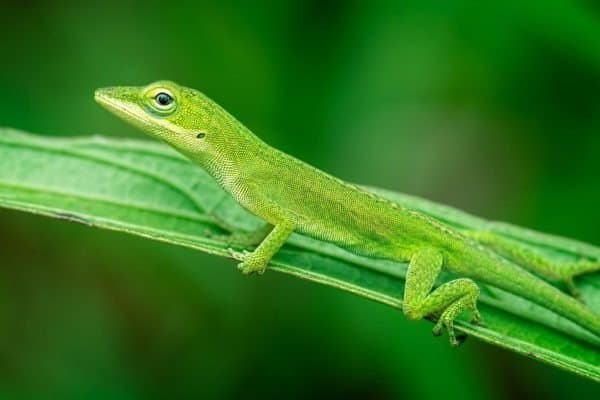 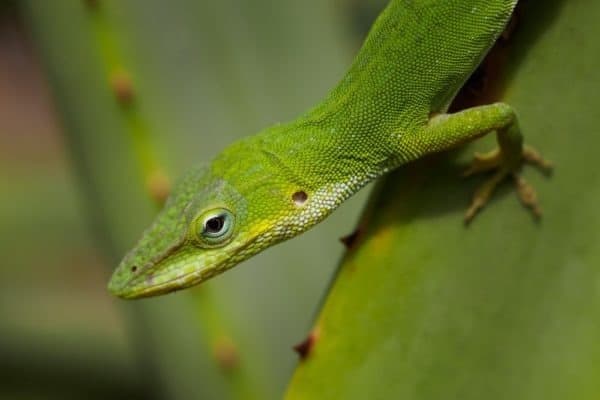 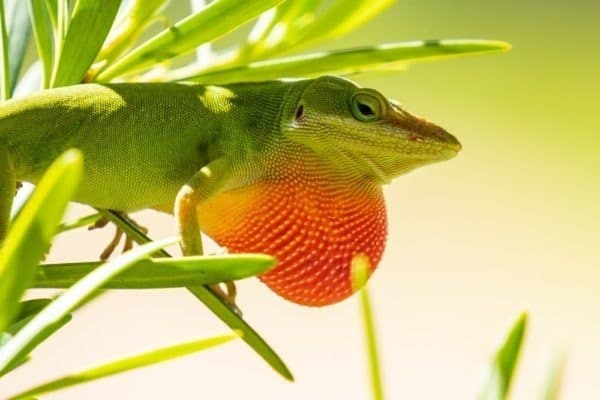 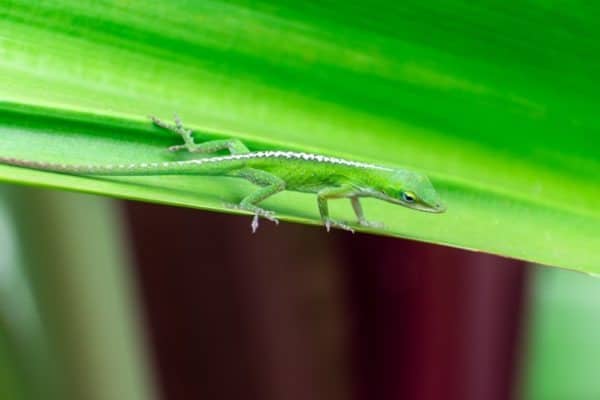 View all of the Green Anole images!

The green anole is the only anole that is native to the United States and is one of the best reptiles for first-time reptile owners.

The small lizard is native to Georgia and South Carolina, found in the Southeastern United States from Florida to Texas along with the Caribbean islands. It is an arboreal species that is related to the iguana. Although they are often called the American chameleon due to their color-changing ability, it is not a true chameleon, which is not native to the United States. Other names are common green anole, American green anole, Carolina anole, and red-throated anole.

The green anole’s scientific name is Anolis carolinensis. Anolis is a genus of lizards in Iguana or Iguanomorpha suborder and the Dactyloidae family. It is part of the larger Reptilia class and Squamata order. The Iguana suborder includes the color-changing iguana, chameleon, agamid along with New World lizards such as anoles and phrynosomatids.

The green anole is a small to medium-sized lizard. It has a slender, agile body, a long, pointed head with ridges between the eyes and nostrils, smaller ridges on top of its head, and toe pads. The species is sexually dimorphic with males being 15 percent larger and females being smaller in all body size measurements.

Males also have a dewlap (throat fan) that is three times larger than the female’s and turns bright red, whereas the female’s range from white to pale pink and is not a common feature. Males also have a dorsal ridge that they can extend behind the head while displaying or experiencing stress. Finally, males get scars on the head and face from fighting other males over territory or during the mating season. Females have a white stripe running along their spine, unlike most males.

Additionally, there are heavyweight and lightweight size classes or morphs of adult males, which can both exist within one population. These differ in dominance, bite force, body mass and length, competition, and vertical jump.

Color changing depends on the environment and health or mood. When it’s green, it’s active and in bright light. When it’s brown,it’s less energetic and in a cool or moist environment.

The males puff out their dewlap, do pushups or bob their heads when intimidated by other males. They are territorial and will fight with other males by biting, scratching or chasing them away. They usually live in the wild with 2-3 females in a territory that is 1 cubic meter (35 cu feet). It is for the fact of male territorialism that lizard owners should keep them alone or one male with a few females.

Green anoles are diurnal (active during the day) and throughout the year. They are especially active during the spring and fall, while winter activity depends on the temperature and amount of sunlight. They are cold-blooded but heterothermic, meaning they can self-regulate their body temperature to a degree, but they also need supplemental heat for digestion and health.

The typical habitat of green anoles are the moist forests and brushy clearings of neotropical and nearctic regions including Georgia, South Carolina and the southeastern United States. However, it has spread to the foliage of urban areas and the low country shrubs of the Carolinas as well as to Hawaii, the Ogasawara Islands of Japan, Cuba, the Bahamas, and Guam.

Green anoles have a largely insectivorous, carnivorous diet consisting of mealworms, grubs, maggots, and small insects such as beetles, fruit flies, and termites. They also eat house flies in Georgia, South Carolina, and other southeastern urban areas, occasionally eat grains and seeds, and even other small lizards such as skinks. They only notice prey that is moving.

One of the uses for the green anole’s color-changing ability is to hide from predators by blending in with trees and bushes. Broadhead skinks, snakes, and birds are common predators, with cats being another in urban habitats. Although the green anole is threatened by over predation, it is not endangered in general. It did, however, go extinct on one island in the Bahamas due to the curly-tailed lizard, a ground-dwelling species which eats lizards and anoles. In Guam, predators such as brown tree snakes (scientific name Boiga irregularis) have reduced their population density.

The brown anole is an invasive species to the green anole’s native habitat and competes with it for shelter and food. As a result, the green anole evolved to live higher up in trees and grow bigger toe pads to be able to climb and run faster.

Green anoles reach sexual maturity at 8 to 9 months. Mating season for green anoles is from April through August or 4-5 months out of the year. During this time, males attract females with head-bobbing and extending their dewlaps. Females who are receptive to mating arch their necks. The male bites the neck of the female and this is a behavior unique to green anoles. He then places his tail under the female and then mounts her back.

The warmer months have the highest reproduction rate due to the heat increasing the size of the gonads. Males are territorial in order to protect their mating partners from intruding males, while females mate in sheltered areas and closed terrain to reduce exposure to predators.

Female green anoles have the ability to store sperm for delayed fertilization. The gestation period is 5-7 weeks, with the female laying one egg every two weeks for an average of 6-9 eggs a year. The eggs are buried in moist soil which the female digs and left to incubate and hatch on their own, meaning the young are left to fend for themselves.

These anoles are the most commonly seen lizard in Alabama and the most common lizard in both urban and suburban areas in the southeastern United States. Florida used to contain the majority of green anoles, but they have been largely replaced by invasive anole species such as the brown anole (scientific name Anolis sagrei). On the other hand, the green anole is an introduced species in Hawaii, the Ogasawara Islands of Japan, Cuba, the Bahamas, and Guam.

What do green anoles eat?

Green anoles eat spiders, flies, crickets, beetles, moths, butterflies, slugs, worms, ants and termites, and gets water from plant-dew in the wild. In captivity, it eats mealworms, grubs, and maggots.

Where does green anole live?

They live in the trees and bushes of the southeastern United States, Hawaii, the Ogasawara Islands of Japan, Cuba, the Bahamas, and Guam.

Why is my green anole brown?

Is the green anole a chameleon?

No, the green anole is not a chameleon. It is commonly thought of as one due to its color-changing ability, and it is in the same suborder, Iguana (Iguanomorpha).

Green anole eggs are oval and are 6 by 4.5mm on average, with an off-white to light tan color.

What Kingdom do Green Anoles belong to?

What phylum do Green Anoles belong to?

What class do Green Anoles belong to?

What family do Green Anoles belong to?

What order do Green Anoles belong to?

What type of covering do Green Anoles have?

Green Anoles are covered in Scales.

What type of covering do Green Anoles have?

Green Anoles are covered in Scales.

What are some predators of Green Anoles?

What is the scientific name for the Green Anole?

The scientific name for the Green Anole is Anolis carolinensis.

What is the lifespan of a Green Anole?

Green Anoles can live for up to 8 years in the wild and 4 to 7 years in captivity.

What is a baby Green Anole called?

A baby Green Anole is called a young anole.

What is the biggest threat to the Green Anole?

The biggest threats to Green Anoles are invasive lizard species.

What is another name for the Green Anole?

How many Green Anoles are left in the world?

The population size of the Green Anole is unknown.

What is an interesting fact about Green Anoles?

How fast is a Green Anole?

A Green Anole can travel at speeds of up to 6 miles per hour.