Scientists don't know whether daedon had scales, feathers, fur, or something else. 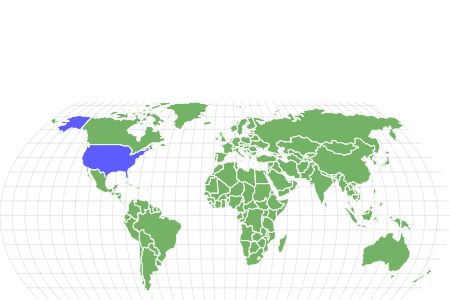 Fun Fact
Scientists don't know whether daedon had scales, feathers, fur, or something else.
Most Distinctive Feature
They had a hunched appearance, much like a bison.
Distinctive Feature
Extremely large, powerful teeth that were designed for ripping flesh and grinding plants
Diet
Omnivore
Favorite Food
They were omnivores that ate just about everything, including included small prey, prey killed by other predators, plants, vines, and berries.

Height
5.8 feet tall at their shoulders

View all of the Daeodon images!

Prehistoric pigs like the Daeodon looked nothing like the adorable pink cuties with curled tails that we know today.

The Daeodon lived during the Oligocene and Miocene epochs, around 20 million years ago. It was much larger than modern-day pigs and not actually related to them at all. Instead, it is more closely related to hippos, although the Daeodon is now extinct. Learn more about these gigantic omnivores that were some of the earliest mammals.

Daeodon shoshonensis is the species that is part of the Daedon genus. Known simply as Daeodon, another similar species was initially called Dinohyus. When researchers realized that they were the same, they both fell under the already established Daeodon name. You may still read Dinohyus in some texts, however.

Daeodon is a member of the Entelodontidae family. They are referred to as Entelodonts and include other pig-like mammals that lived between 38 and 19 million years ago. All Entelodonts, including the Daeodon, are now extinct. Daeodon belongs to the Artiodactyla order. This means that they are even-toed ungulates and put their weight on an even number of toes when they walk. They belong to the Mammalia class, Chordata phylum, and Animalia kingdom.

While modern pigs and hogs can get large, the Daeodon was even bigger. They walked on all fours and still stood around 5.8 feet tall, measured at their shoulder. Their skulls were around 3 feet long and represented a large portion of their overall body. They were the largest of the Entelodonts and formidable during their lifetime.

Their large heads were supported by muscles attached to their vertebrae, similar to bison or rhinoceros. Their necks were small compared to their head. Overall, they had a hunched appearance and their snout was low to the ground. They had strong jaws, especially the males, and space for large muscles in their cheeks. This likely helped them eat and defend themselves, and may have even played a role in competing for mates.

Daeodon had long limbs and walked on all fours. Their front legs were fused, like many other Entelodonts. Their hunched appearance looks much like a bison, with the tallest portion of their body at the shoulders.

Researchers do not know very much about their skin and whether it had scales, feathers, fur, or something else. They do know that Daeodon was a mammal. Because they were warm-blooded, they likely had some sort of covering to help regulate their body temperature or lived in temperate climates.

Diet – What Did Daeodon Eat?

Daeodon was an omnivore. Fragments of their fossils and teeth show that they had teeth suited for tearing into meat as well as teeth made for grinding plants. This is characteristic of Entelodonts. Their teeth and jaws were strong enough to bite bone, with bite marks shown in other preserved bones from the period matched to their bite. They had extremely large and powerful teeth. The name Daeodon is derived from the Greek words for “terrible” and “teeth.”

Researchers don’t know exactly what Daeodon ate. On the one hand, their snouts were low to the ground which may have made it hard for them to take down prey. They were efficient runners, however, and could have outrun some herbivores of the time. Scientists believe that they had similar eating habits to modern-day bears. They would eat just about anything that was convenient and provided them with the nutrients they needed. This could have included small prey, prey killed by other predators, plants, vines, and berries.

Daeodon fossils show that they lived during the end of the Oligocene and the start of the Miocene epochs, around 20 million years ago. This point of transition shows that these animals experienced many changes in their environment that likely led to their extinction.

Fragments have been discovered in Oregon as well as Nebraska. The Agate Fossil Beds National Monument in Nebraska is well-known for being the site of many fossilized early mammals. The Age of Mammals display shows how these creatures lived together as well as what animals may have existed in the same epochs.

During their time, Daeodon lived in the vast grassland of these areas. Their habitat ranged from river beds to drier areas. This led to their adaptation to eating both plants and animals to survive. The changing climate also impacted their survival and ultimately their extinction.

Larger carnivores likely posed a threat to Daeodon. Although, due to their size, it probably wasn’t as significant as the threat of decreasing food supply, changing habitat, and competition for resources and mates with other Daeodons. Scientists think that the large cheek muscles on the male specimens show that they engaged in fights for mates, either by posturing or actually physically fighting with each other. Those aspects are not present in the female specimens.

Beardogs were some of the largest carnivores during this period. They were similar to wolves or hyenas and even lived in packs. While they were not as large as the Daeodon, they could have eaten young, old, or sick Daeodon that were weak.

Unlike other prehistoric animals like dinosaurs, Daeodon was a mammal and likely gave birth to live young. When they were young, Daeodon were particularly vulnerable to predators. They did not have the same strong musculature or imposing presence that the adults had. Older, wounded, or ill Daeodon may have also been easier prey.

The first Daeodon fragments were found in Oregon. But it wasn’t until much later, starting in the 1940s, that researchers began to put together a more complete picture of this animal’s description, life, and evolution.

Some of the most interesting discoveries of ancient mammals, including the Daeodon, were made in Nebraska. A complete skeleton originally called Dinohyus was discovered in Nebraska’s Agate Fossil beds. Later, researchers realizes that it matched other specimens of a species they had named Daeodon. Because the earliest naming is used for all subsequent naming, the new skeleton was reclassified as a Daeodon.

Daeodon discoveries are rare, making the complete skeleton specimen very valuable for researchers who want to know more about this ancient mammal.

Entelodonts went extinct in the early Miocene, around 16 million years ago. This included the gigantic Daeodon. Temperatures during this time increased, leading to drier climates. As the climate changed, so did the vegetation and the entire food chain. Although Daeodon was able to eat both plants and meat, they did not adapt fast enough to survive this period of change in earth’s history.

Scientists do not know exactly when the Daeodon went extinct, but they can use specimens of other similar animals to determine what types of species were able to evolve to survive and which ones did not. This included the Daeodon and all other Entelodonts. Even though they look like some modern animals, including warthogs, bison, and pigs, these animals are not descended from Daeodon.

Similar Animals to The Daeodon

View all 62 animals that start with D

Daeodon lived during the transition from the Oligocene to the Miocene epochs, around 20 million years ago. Some of the most-studied specimens are from the Age of Mammals in the Miocene.

How big was a Daeodon?

These prehistoric mammals were huge, often standing around 6 feet tall. They walked on all fours and the tallest part of their body was at their shoulder. Their head was also large, relative to the rest of their body, at almost 3 feet long.