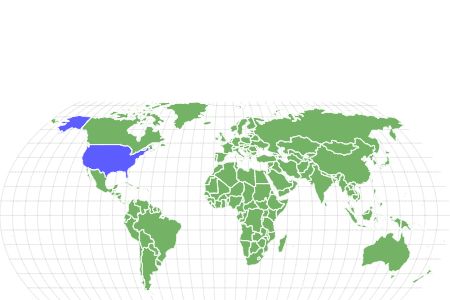 View all of our Moccasin Snake pictures in the gallery.

View all of the Moccasin Snake images!

“When it feels threatened, this snake reveals its fangs and puffy, white mouth”

Cottonmouth is among the many alternative names of the moccasin snake. It is a venomous snake living in the southeastern region of the United States. They are carnivores eating turtles, fish, frogs, snakes, and other small prey. Baby moccasin snakes are vulnerable to attack by snapping turtles, cats, and raccoons in their habitat. These snakes can live up to 25 years.

Where to Find Moccasin Snake

The moccasin snake lives in North America in the southeastern region of the United States. Its range runs east from Texas and Oklahoma to the southern part of Virginia. It’s also seen in southern Indiana and Missouri.

Their habitat includes wetlands, forests, the plains, rivers, and lakes. They take shelter in hollow logs and beneath leaf debris. On hot days, they move onto rocks and ledges to sun themselves.

In the extreme northern parts of their range, moccasin snakes go into brumation in the wintertime. These snakes are especially active in the spring during their breeding season.

Moccasin snakes belong to the Agkistrodon genus. The Agkistrodon piscivorus is in the Viperidae (viper) family. The other members of this genus are venomous as well.

• Cantil (Agkistrodon bilineatus)-This snake is sometimes called the Mexican moccasin or the Mexican ground pit viper. It lives in Mexico and further down into Central America. This snake is a little shorter in length than other moccasin snakes at an average of 24 inches.
• Florida cottonmouth (Agkistrodon conanti)-The Florida cottonmouth shares much of the same wetland habitat in the southeastern United States as the Agkistrodon piscivorus. Though its length ranges from 30-48 inches, this snake can grow to a length of six feet!
• Yucatecan cantil (Agkistrodon russeolus)-Instead of having black scales, this viper is deep reddish brown in color. It’s found on the Yucatan Peninsula in Mexico and in Belize in Central America.

When it comes to alternate names this snake has a lot of them! It’s called a viper, a cottonmouth, black moccasin, or a water moccasin.

It belongs to the Viperidae family and the class Reptilia.

Though researchers are unsure about the exact population of the moccasin snake, they believe there are over 100,000 adults. This snake’s population is categorized as stable, and its conservation status is listed as Least Concern by the IUCN Redlist.

How to Identify a Moccasin Snake: Appearance and Description

A moccasin snake has black scales on its back featuring either light or dark brown crossbands. Its head is light brown or olive, and it has an underside of gray or light brown with dark blotches. This snake has a black stripe located near each eye. Its eyes have vertical pupils, and its head is triangular. There is a thin white line on its upper lip as well.

The length of an adult moccasin snake ranges from 30 to 42 inches. Adults can weigh up to ten pounds.

How to identify a moccasin snake:
• A black body with a dark brown or olive-green head
• A dark horizontal stripe near each eye
• Dark or light brown crossbands on its back
• A gray or tan underside with a pattern of dark blotches
• A white line on its upper lip
• A triangular shaped head and eyes with vertical pupils

In comparing these two snakes, you’ll need to know one thing right away. They are the same snake! The moccasin snake goes by many other names including cottonmouth snake. It’s called a cottonmouth because of the puffy, bright white interior of its mouth.

This reptile’s bite can inject powerful venom into its prey or a human. It lives in the southeastern United States in marshes, forests, and wetlands.

Moccasin Snake Venom: How Dangerous Are They?

Moccasin snakes are venomous. A bite from this snake can contain venom that damages tissue and causes severe pain.

If someone gets a bite from a moccasin snake, it’s important to get to the emergency room or call for an ambulance. Once the ambulance is called, keep the injured person as still as possible, give them water, and put a blanket over them for warmth.

These snakes have potent venom that’s usually not deadly, but there’s always a risk. At the medical facility, the person is likely to get antivenin along with topical treatment to help relieve the pain of the bite.

Moccasin snakes live in a marshes or wetlands. If they live in a forest habitat, it’s not far from a body of water such as a pond, lake, or stream. These snakes spend time in the water and on land. So, a person walking trails in the woods or fishing in a lake may encounter a moccasin snake.

The moccasin snake is sometimes thought of as an aggressive snake. This is likely due to its habit of revealing its fangs and the puffy white interior of its mouth. However, this snake opens its mouth in an effort to scare away predators. It doesn’t want to confront a threat. Though it has a powerful venom, the moccasin snake is more likely to try to escape than strike. In short, despite their fearsome, open-mouthed behavior, these are not aggressive snakes.

Yes, they have venom that can cause extreme pain and tissue damage. Fortunately, its venomous bite rarely results in the death of a human.

How do moccasin snakes hunt?

This snake remains very still in one area until it sees a rodent, bird, frog, or other prey. Then, with its great speed, the moccasin snake pursues the animal, grabbing it with its strong jaws. Once its venom has killed the prey, this snake swallows it whole.

Moccasin snakes are especially good hunters because they can pursue prey on land and in the water.

A baby or juvenile moccasin snake goes about hunting a little differently. A young snake swimming in the water flicks its pink tongue in and out of its mouth. Frogs and fish sometimes mistake this snake’s tongue for a juicy worm. When the prey gets close enough to the snake, it’s captured!

No, these are not aggressive snakes.

Where do moccasin snakes live?

They live in the southeastern part of the United States. Wetlands, forests, and marshes are their most common habitats.

What do moccasin snakes eat?

How do you identify a moccasin snake?

In addition to its black body and the dark crossbars on its back, a moccasin snake has a dark stripe near each eye. This snake also has vertical pupils. Plus, it’s a viper which means it has a pit in each cheek, just behind its nostrils.

When this snake feels threatened, it opens its mouth revealing its fangs and puffy white gums.

Is a copperhead a moccasin snake?

No, they are two different types of snakes. One major difference between them is copperhead snakes are shorter than moccasin snakes at about 30 inches long. Also, copperheads have tan or copper-colored scales whereas moccasins normally have black scales.

Of course, both snakes can give a venomous bite so should be left in peace in their habitat.