The African bullfrog is one of only three species of frog that have “teeth.”

Click through all of our African Bullfrog images in the gallery. 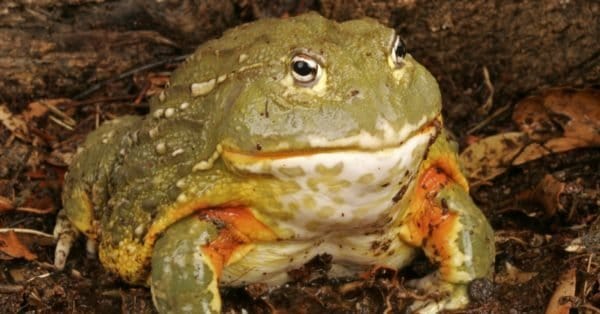 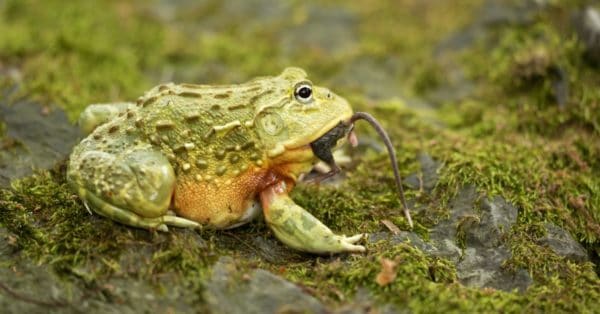 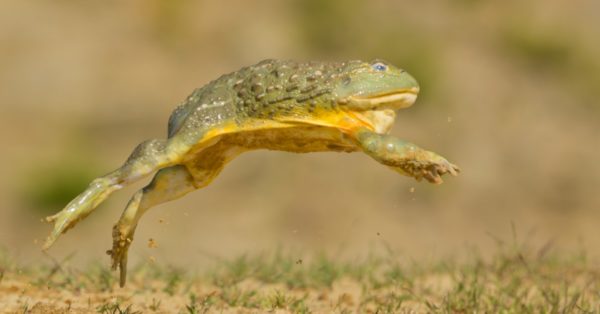 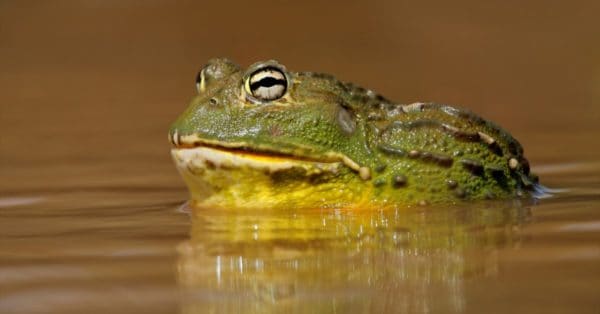 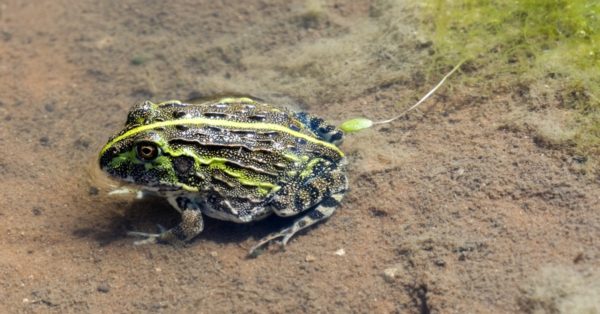 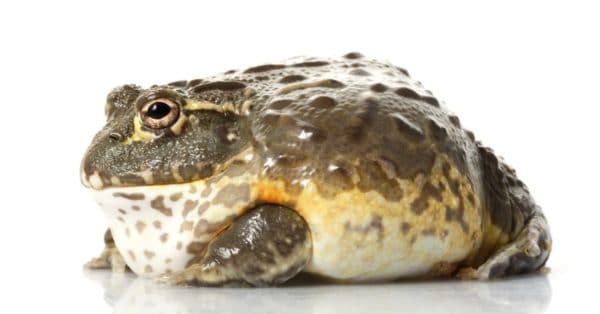 View all of the African Bullfrog images!

The African bullfrog is the biggest frog in sub-Saharan Africa.

The African bullfrog is one of the biggest frogs on earth. Only the Goliath frog is bigger. It lives mostly in the central part of sub-Saharan Africa. It is a voracious eater and will swallow anything it can tackle but is also popular as a pet. The price of one of these frogs is not prohibitive.

Another characteristic of the bullfrog is the sound it makes when it is annoyed. The sound is described as croaking, roaring, or bleating.

The adult male African bullfrog is olive green, with a throat region in shades of yellow or orange. A big male can be the size of a dinner plate! The female frog is much smaller, and olive green to light brown, though her throat is white or cream. Younger bullfrogs are far more vividly colored, with mottled skin and white or yellow lines that run down their back. The colors fade to the adult coloring as the frog gets older, though some females do retain the lines. Adult frogs have a spade-shaped knob on their hind foot to help them dig. Their back toes have some webbing while the stubby front toes do not.

The African bullfrog is noted for having a huge skull and robust skeleton, and though they do not have teeth, their bottom jaw has three structures called odontodes. These are toothlike growths that are very much like teeth but differ from teeth in that they grow superficially on the top of the skin. Odontodes are adaptations used to grab and hang on to prey. The African bullfrog is one of only three species of frog that have “teeth.”

African bullfrogs are solitary save the breeding season, which happens after a heavy rain that allows shallow, temporary pools of water to form. A group of frogs is called an army or a knot.

How big is the African bullfrog?

Male African bullfrogs are almost 10 inches long, while females are about 4.5 inches long.

How much does the African bullfrog weigh?

The males of this big frog can weigh a little over 4 pounds, and the females weigh about half that, as they are half the size. This is unusual because in most frog species the females are bigger than the males.

The African bullfrog has the body plan of most other frogs. Its powerful legs help it jump away from danger, and its hairless skin protects its internal organs, helps it take in oxygen, and absorbs water. The skin is also full of glands. Many of these glands are found on the frog’s back and head and secrete a slippery solution that both keeps the skin moist and protects it against pathogens. Since it’s slick, it also helps the frog escape predators.

The bullfrog can be found in an amazing variety of habitats in sub-Saharan Africa. It’s found as far east as Somalia, as far west as Nigeria, and south into South Africa. Though they are amphibians, African bullfrogs can live in climates that stay dry for years. They can live in the mountains but are probably happiest near bodies of water. The secret to their adaptability is that they dig chambers in the soil when the climate becomes too harsh, enter the chambers and estivate until conditions are more favorable.

What does the African bullfrog eat?

The frog eats snakes, reptiles, amphibians, insects, mice, other small mammals, and small birds. They are not above eating each other, and it is rather common for a bullfrog tadpole to start eating its brothers and sisters when it emerges from the egg. A father bullfrog will sometimes make a meal of some of the eggs or tadpoles he is guarding.

Like most other frogs, the African bullfrog is a carnivore. It hunts by everting its sticky tongue. The tongue attaches to its prey and draws it into the frog’s enormous mouth. Once there, it can be held by the dermal teeth while the frog kills it.

A person who keeps the African bullfrog as a pet needs to make sure that it does not try to eat anything that is indigestible, such as toys or other foreign objects. The frog should also not be fed muscle meat such as ground beef, for it doesn’t supply the nutrients the animal needs. Frogs can be subject to infections in their skin and eyes and ammonia poisoning if their enclosure is neglected.

What eats the African bullfrog?

People who live near African bullfrogs sometimes eat them and consider the meat to be a delicacy. Besides humans, predators include birds of prey that are big enough to snatch up adults with talons or beaks, monitor lizards and turtles that grab juveniles with their sharp beaks then swallow them. The biggest threat to the frog is habitat destruction, but these frogs have developed adaptations that allow them to thrive in a variety of climates, from broiling hot deserts to high velds where the temperatures can get below freezing in the winter.

The African bullfrog’s conservation status is ”Least Concern” though their numbers are declining.

The African bullfrog is sexually mature when it’s about 1 and a half to 2 years old. During the breeding season, the younger males gather in one small area of the pool while the bigger males go to the center and try to chase each other off. They will sometimes fight to the death to do this. They make a sound that resembles a loud “whoop!” to attract females. The females enter the water and attempt to mate with the dominant male. A female African bullfrog releases up to 4000 eggs in the breeding pool. Then, she leaves to let the father guard them.

There is no gestation period for the African bullfrog. Once she is clasped by the male she has selected, the female lays eggs on the surface of the water, and the male fertilizes them. The tadpoles hatch about two days later. The young of bullfrogs are called larvae, tadpoles or polliwogs.

Since African bullfrogs are amphibians, their young do not nurse and therefore do not need to be weaned. They are omnivorous and will take vegetation, live and dead insects, fish that are small enough to handle, and other tadpoles. As they mature, they turn into exclusive carnivores.

Tadpoles grow to young frogs in about three weeks. If it survives infancy, this bullfrog has been known to live as long as 45 years. As they age they may, like other amphibians, be subject to diseases such as chytridiomycosis, which attacks the skin, and other diseases caused by ranaviruses.

Though the exact population of African bullfrogs is unknown, its conservation status is “Least Concern,” though its population is declining.

African bullfrogs are opportunistic carnivores. These giant frogs are notorious for eating nearly anything they can subdue and swallow.

What is the African bullfrog’s skin type?

The African bullfrog’s skin is hairless and slippery. However, it is easier to handle than other frogs because the skin also contains ridges. However, the frog does not like to be picked up frequently.

What is the African bullfrog’s top speed?

African bullfrogs don’t actually run very fast, but they can jump. They usually jump about 3 feet but can jump as much as 6 feet. This would be several times the length of their body.

What is the African bullfrog’s most distinctive feature?

The most distinctive feature of the African bullfrog is its sheer size.

What are the African bullfrog’s other names?

The frog is also known as the Giant African Bullfrog because of its size. It’s also called the pixie frog.

What type of animal is the African bullfrog?

The frog is an amphibian, which means it begins its life in an aquatic environment and moves onto land when it matures. It also undergoes a metamorphosis from a tadpole to an adult.

How much does an African bullfrog cost?

African bullfrogs aren’t dangerous, but they have a reputation for being rather cranky.

African bullfrogs can be good pets if their owner respects their boundaries. Given their size, the price of one of these frogs is fairly reasonable. Like most frogs and other amphibians, they are easy to care for and placid and healthy if their needs are met.

African bullfrogs can bite, and the bite can be painful, as their dermal teeth are sharp and meant to hold on to struggling prey.