Archerfish can shoot a stream of water up to five feet with amazing accuracy. 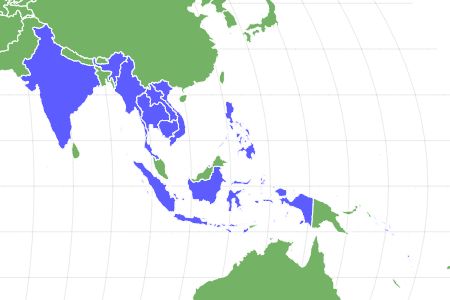 View all of our Archerfish pictures in the gallery.

View all of the Archerfish images!

The Archerfish (also known as the Spinnerfish) is a small fish ranging from Southeast Asia to Northern Australia. They are mostly freshwater fish with a few species that live in brackish habitats near the coastline.

Typically, Archerfish are most known for preying on land-based insects by shooting them with a stream of water from their mouth.

The scientific name for the Archerfish is Labrus jaculator. Sometimes, they are also often called “spinner fish.” Archerfish are in the order Perciformes, which is the largest order of vertebrates, containing about 41% of all bony fish. In all, this order contains 160 families. Specifically, the Archerfish is in the Toxotidae family and the Toxotes genus, of which there are only 10 species.

As you’d guess, “archer” refers to how the fish can “shoot” their prey from a distance, much like an archer uses a bow and arrow. When translated, Toxotoes means “bowman” or “archer.”

Types of Archerfish: The 9 Different Species

There are 9 different species of Archerfish. Most live in freshwater, with 2 or 3 living in brackish water near the coast. Only 3 species have been confirmed to be able to shoot water to bring down their prey.

Archerfish are elongated, with deep bodies almost flat from the dorsal fin. Sizes are typically small, about 12-18 cm. The largest species can grow to 40 cm.

The most common coloring is silver to white in color with a few dark bands spaced vertically on the body. These white and black markings camouflage the fish with the underwater mangrove vegetation.

Furthermore, their small and slender bodies also reduce the visibility from the surface.

Archerfish are mainly found in Southeast Asia, from India to the Philippines, Indonesia, Vanuatu, the Solomon Islands, and New Guinea. Plus, some species are found in Northern Australia. They live mostly in freshwater streams, rivers, and brackish waters near the coast.

Archerfish are quite common and can spawn up to 150,000 eggs at once that hatch in 12 hours. However, their main threat is habitat destruction from human development and pollution.

For the most part, the Archerfish are carnivores. They hunt near the water’s surface and shoot their prey with a stream of water. They can shoot multiple times or even jump out of the water if needed.

Typically, the prey is consumed once they fall to the water’s surface.

Predators that threaten Archerfish include humans, other larger fish, and birds of prey. Luckily, these fish are fast swimmers and can easily evade larger fish.

They stay near the surface to hunt. However, they can quickly dive deep to evade birds. Instead, humans are the biggest threat, as they collect them for the pet trade.

What Do Archerfish Eat?

For the most part, Archerfish mainly eat insects, spiders, smaller fish, and crustaceans. Usually, they are excellent hunters and can shoot streams of water up to 5 feet above the surface of the water.

Often, their prey is resting on the vegetation just above the surface. However, they can also hit moving targets with practice.

Archerfish spawn at the beginning of the rainy season, which ends tropical dry spells. They are known to swim out from the brackish areas and spawn near the coral reefs and rocks.

They can lay between 3,000-20,000 eggs, with some of the larger species laying up to 150,000. These fish are mature at one year of age and typically have a short life span of fewer than three years.

Archerfish in Fishing and Cooking

Archerfish are mainly caught for the pet trade and are not eaten by humans. Since they are small, fast, and live mainly in brackish mangrove areas, they are hard to catch. These areas have murky water and are full of vegetation.

They are mainly caught by hand with nets in small quantities. Typically, they are much more valuable when sold as pets than when eaten. Since they are small, they do not provide much nourishment.

Where can you find Archerfish?

Archerfish are found mainly in Southeast Asia.  They live in the shallow brackish waters where freshwater streams and rivers meet the ocean.

These areas have heavy vegetation and have abundant food for the Archerfish such as insects and spiders.

Archerfish can be kept in home aquariums, however they do best in larger aquariums with other archerfish.

They are schooling fish so the tank should have at least 4.  They also prefer vegetation and plenty of hiding places.

Since they learn to shoot their prey to eat, if not given this opportunity and just fed like regular fish, they will eventually forget how.

How big do Archerfish get?

In the wild, they can grow up to 11 inches in length.  In a home aquarium, they rarely grow larger than 4-5 inches.