The house finch can become redder depending on what it eats Click through all of our House Finch images in the gallery. 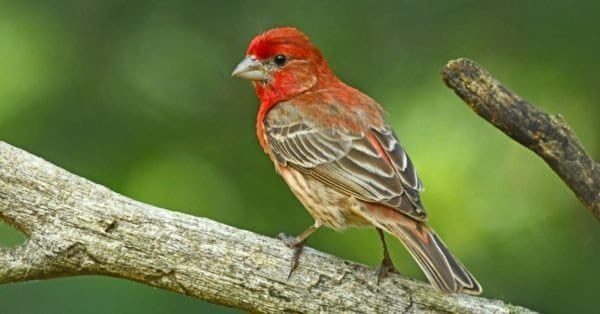 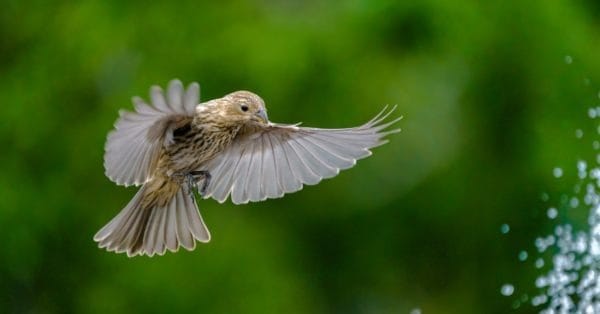 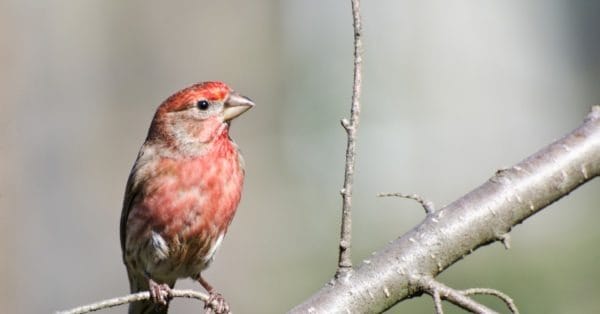 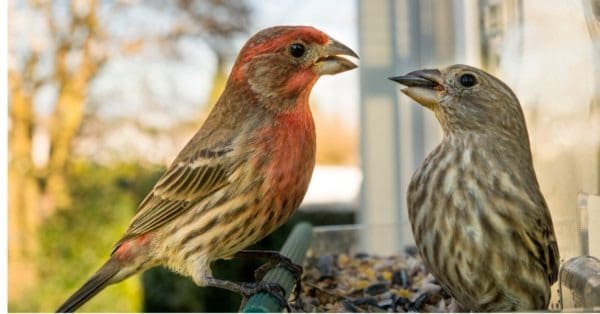 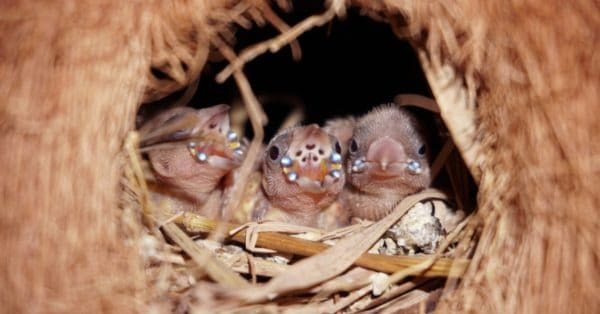 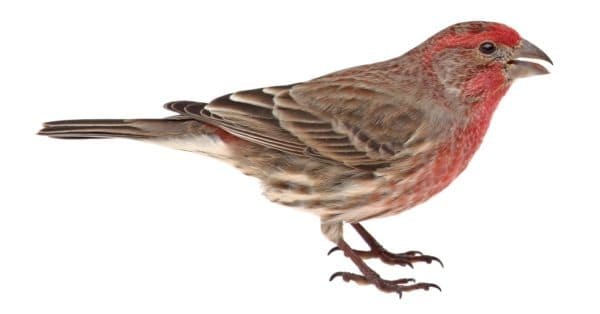 View all of the House Finch images!

The house finch is one of the most common bird species in all of North America.

Featuring colorful plumage and a stout bill well-adapted for seed-eating, the house finch is a member of the true finch family (scientific name Fringillidae). You can often hear their bright and cheerful voices in the spring and summer even without seeing them.

Where to Find the House Finch

The house finch is a bird that maintains a large territory throughout most of the United States and Mexico, plus the southern parts of Canada. This species used to be entirely endemic to the west, but after it was introduced to the east in the 1940s, it quickly spread to the rest of the United States. It was also introduced into Hawaii in the late 19th century. The house finch is amenable to almost any environment within this range, including plains, forests, and deserts. It also coexists reasonably well with people.

The female finch constructs the small cup-shaped nest out of grass, twigs, leaves, roots, feathers, and even small debris.

The scientific name of the house finch is Haemorhous mexicanus (mexicanus is obviously the Latin term for Mexico). It used to be part of the genus Carpodacus, but after thorough DNA analysis, biologists agreed that the Caprodacus genus should be reserved for Old World finches, while the New World finches were moved into a new genus, Haemorhous. This genus name is the combination of two Greek words: haemo, meaning blood, and orrhos, meaning rump. This is perhaps a reference to the bright red feathers on the lower back of the finch. There are two other species in this genus: the purple finch and Cassin’s finch, both of which overlap with the range of the house finch.

This finch is a small bird, measuring no more than 6 inches in length with a 10-inch wingspan. It has a short but stout beak, a square-tipped tail, and a brown body with darker streaks along its flanks. An adult male is adorned with red feathers around its head and shoulders, extending down parts of the stomach and back. The intensity of the color depends on the amount of fruit in its diet, which varies with the seasons.

The house finch is a social species that congregate in large flocks for protection. These flocks exhibit distinct hierarchical behavior with females dominant over the males. The finch emits a loud warbling song after sunrise and just before sunset in the breeding season. This song becomes most intense during the courtship and nesting periods. Body posture and plumage are also important aspects of their communication.

Throughout most of its range, this finch is a stationary bird that does not stray far from its territory. But some northern and eastern populations do migrate south for the winter.

Unlike many other types of finches, the bird will forage in both the trees and the ground. When on the ground, this species likes to forage in large flocks for protection or keep a high perch nearby in case they sight predators. The house finch also drinks once per day by scooping up water in its bill and tilting its head back.

What does the house finch eat?

This finch eats a combination of grains, seeds, buds, and flowers. Some of its favorite seeds include sunflowers, mistletoes, dandelions, and thistles.

These finch falls prey in large numbers to predators, but it has adapted very well to human activity. The IUCN Red List currently categorizes this species as least concern.

What eats the house finch?

These finches are mostly preyed upon by domesticated cats and Cooper’s hawks. Raccoons, skunks, snakes, squirrels, rats, chipmunks, crows, and blue jays will all raid the nests for eggs.

The house finch establishes monogamous pair bonds in the winter by engaging in several courtship behaviors. To show their interest, the couple may touch bills and feed each other. But by far the most elegant courtship display is called the butterfly flight. The male ascends up to 100 feet in the air and then glides back down to his perch while singing the entire way. Females seem to prefer brightly colored males, because (as mentioned previously) the bright red is an indication of the male’s fruit consumption and therefore his foraging ability, strength, or desirability.

The actual breeding season lasts between March and August of every year. After constructing her nest, the female produces three to six blue or green-white eggs at a time and then incubates them for about two weeks until the babies hatch. Both parents take turns feeding the chicks with regurgitated seeds.

After growing their flight feathers, the fledglings leave the nest around 12 to 19 days later. The female will then prepares to build a new nest for the next brood of eggs. She can produce up to six broods per season, but only three of these will produce actual babies. The average lifespan is not entirely known, but the oldest known house finch lived some 11 years and seven months in the wild. The lifespan is often cut short by predators and nest raiders.

While many species have grown rarer, these finches actually expanded their range and population numbers in the 20th century. The conservationist group Partners in Flight estimates that there may be up to 40 million house finches in the wild. Other estimates place the number closer to 20 million.

Does the house finch migrate?

Only certain eastern and northern house finch populations migrate south for the winter.

How many eggs does the house finch lay?

How fast does the house finch fly?

It is not known exactly how fast the house finch can fly.

What is the house finch’s wingspan?

The house finch has a wingspan of 8 to 10 inches from one tip to the other.

When do the house finch fledglings leave the nest?

The young fledgling leaves the nest after 12 to 19 days.

What is the difference between a purple finch vs. a house finch?

As members of the same genus, both the house finch and purple finch are quite similar in appearance and have an overlapping range. They do differ in their color (male purple finches exhibit a much deeper red, while the females have a white mark above each eye), but this is not always a sure-fire way to identify them, because each individual member of the species can vary. The best way to tell them apart is that the purple finch has a bulkier body with a thicker beak and a slight crest or crown of feathers on the head. The purple finch also has a richer sound in general.

What does a house finch eat?

The house finch has a rather exuberant and cheerful-sounding warble.

How long do house finch eggs take to hatch?

The babies hatch after about two weeks.

House finches are very common across the United States and Mexico. They are common even in urban and suburban environments.

What is another name for the House Finch?

The House Finch is also called the American rosefinch.

What is another name for the House Finch?

The House Finch is also called the American rosefinch.

What are some distinguishing features of the House Finch?

The House Finch has a bright red coloration.

What is an interesting fact about the House Finch?

The House Finch can become redder depending on what it eats.