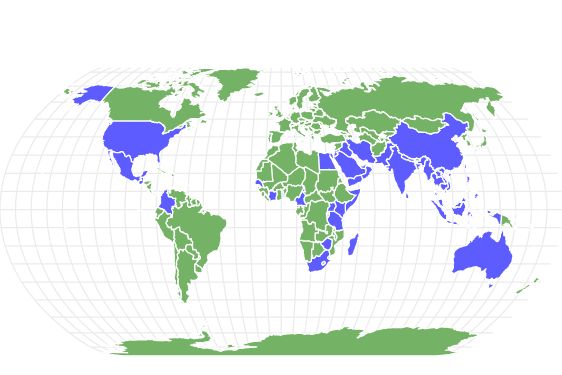 View all of our Brahminy Blindsnake pictures in the gallery.

View all of the Brahminy Blindsnake images!

Brahminy Blindsnakes are the smallest snakes in the world.

Where To Find Brahminy Blindsnakes

In their natural habitat, Brahminy Blindsnakes live in loose soil, leaf litter, rotting logs, sawdust, and beneath surface debris and rocks in jungles and other areas with high humidity. Occasionally, you will find them in trees. Because they like to hide in the pots of tropical plants, they have spread all over the world and have become abundant in many urban areas in tropical and semitropical climates. These snakes love bathroom floors in urban areas because of high humidity, plus other areas of houses such as the spaces between walls and under the carpet or other flooring. The presence of these snakes inside your home when you have sealed entrances can indicate that you may have an ant or termite infestation. They are social animals with several individuals often hiding in the same area. Their exact lifespan is unknown.

These snakes are most likely originally indigenous to South Asia, but they also appear to have widespread populations in Africa. Their vertical distribution ranges from sea level to as high as 4,900 feet in Guatemala. Distribution in Africa includes the countries of Egypt, Kenya, Senegal, Uganda, Ivory Coast, Togo, Zimbabwe, Somalia, Cameroon, Tanzania, Mozambique, Zanzibar, South Africa, Madagascar, Mauritius, and Seychelles.

As an invasive species, these snakes have colonized various parts of the United States as part of the tropical plant trade. They are particularly prevalent in Florida, California, Georgia, Louisiana, California, Arizona, Connecticut, Texas, and Hawaii. Other places in the Americas where this snake has become invasive include Mexico, Guatemala, Belize, Colombia, Barbados, the Cayman Islands, and the Turks and Caicos Islands.

Because of their invasive nature, Brahminy Blindsnakes have been introduced in some countries to control the spread of termites. These include Australia, particularly on the Sunshine Coast, in Oceana on Palau, Fiji, Guam, Sipan, and Tahiti.

Other areas where this snake has been found include Tenerife and Gran Canaria in the Canary Islands and Malta.

Indotyphlops braminus is the Latinized form of Brahmin, the Hindu high caste. The common Layaylam term for this snake is Kurudi, while sirupaabmu is the common Tamil term.

Although these snakes are deemed the most populous in the world, their exact population is unknown. Its IUCN conservation status is of least concern. Snakelets are independent at birth. They reproduce at a fast rate, and because they do not need males for reproduction, they can quickly become uncontrollable.

How to Identify Brahminy Blindsnake: Appearance and Description

These snakes are small in length and width, averaging about 4.4 to 6.5 inches long with a maximum length of approximately 6.8 inches. They appear shiny silver grey, charcoal grey, or purple on top with a grey to brown belly. Juveniles have coloration similar to that of adults. Their heads and tails are blunt and difficult to distinguish from one another, although the tail has a tiny pointed spur. Scales are tiny, smooth, and shiny all over their bodies, with 14 rows of scales along their bodies.

Brahminy Blindsnake: How Dangerous Are They?

They are considered the most populous snake globally, yet their exact numbers are unknown. Their IUCN conservation status is of least concern.

They do not bite if threatened by humans and will try to escape by burrowing into the soil. When captured, they sometimes release a foul-smelling musk from glands in their tails. You may only encounter them when digging in the soil or turning over rocks, and even then, you have little fear as they are not poisonous to humans or pets. When caught, they may try to squirm vigorously or prick humans with their tails. Their exact lifespan is unknown.

Is the Brahminy blindsnake poisonous?

These snakes do not have venom poisonous to humans, so their bite, although rare, is more of a nuisance than anything else.

Although they are not interactive animals, they are docile, meaning you can keep them as pets. However, they may not be too interesting because of their burrowing habit. Their primary diet is termites, although pet owners can find other suitable food.

How do you get rid of Brahminy blindsnakes?

The most effective way to get rid of them in your home is just to pick them up and take them outside. Because they are not insect pst, you should not treat them with insecticide on your lawn as their natural habitat is in soil. If blindsnakes are entering your home from outside, seal off any holes that may allow them to find their way inside.

What do Brahminy blindsnakes eat?

They feed on the eggs, larvae, and pupae of ants and termites.

How do Brahminy blindsnakes hunt?

They are not hunters but rather simply eat the prey when they encounter them, as their diet consists mainly of eggs, larvae, and invertebrates.

They are not aggressive and usually will not bite.

Where do Brahminy blindsnakes live?

They are fossorial animals, meaning they live in burrows underground whenever possible.