Click through all of our Sealyham Terrier images in the gallery. 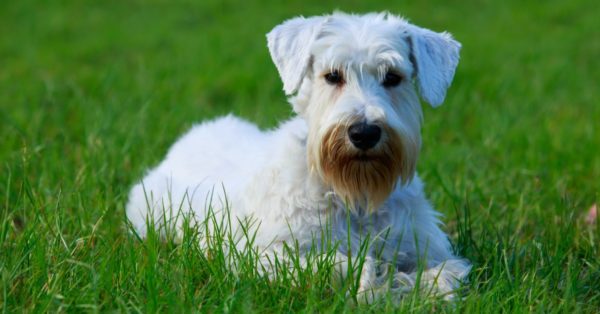 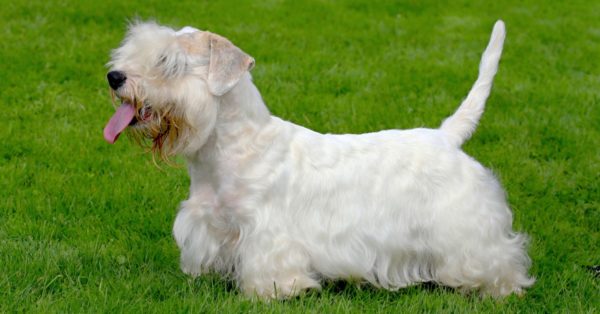 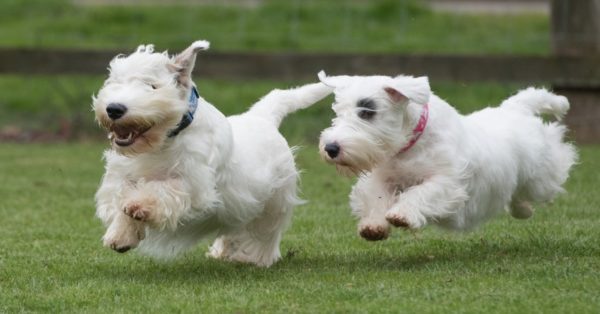 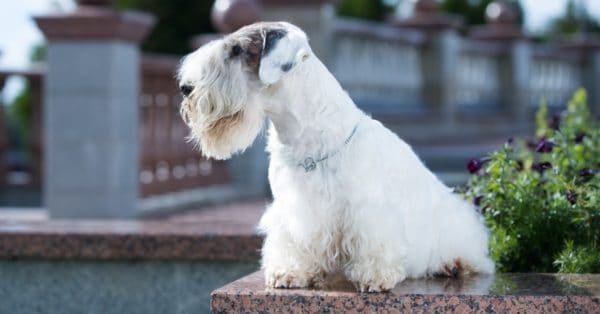 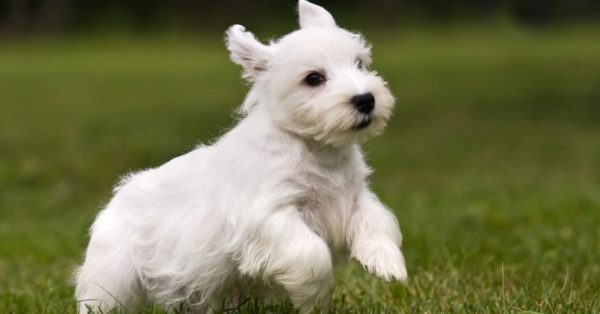 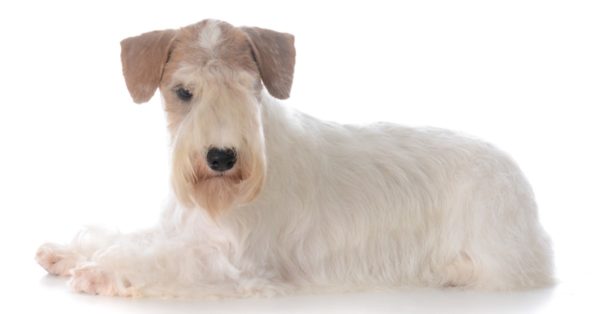 View all of the Sealyham Terrier images!

This post about the Sealyham Terrier may contain affiliate links to our partners. Purchasing through these helps us further the A-Z Animals mission to help us educate about the world’s species so we can all better care for them.

The Sealyham Terrier is the brainchild of breeder Captain John Tucker Edwardes and is named for his Welsh estate, Sealyham, in Pembrokeshire. Sealies, as they are known for short, was bred by Captain Edwards between 1850 and 1891 for the purpose of hunting smaller game animals and medium-sized varmints such as badgers, foxes, and otters.

The tough little dog he created was superb in its role as a tireless hunter, yet also possesses a remarkable appeal as a show dog. Its ability to dig out ground lairs without fear made it a welcome addition to the family of any landowner even as its deep and loud bark made it of great value as a watchdog.

Sealyham Terriers are generally white in color, but some have yellow, tan, gray, or badger (black and brown) markings on their facial area and ears. Their head and face are covered with much longer hair than is found on the rest of the body. Despite standing only about 11 inches tall, the breed has much of the power of larger dogs due to its sturdy musculature and powerful jaws. When this is combined with a “never back down” mentality, Sealies are not to be discounted in any engagement.

Like other dogs bred for ferreting out burrowing creatures, the Sealie is built low to the ground. The maximum height achieved will be in the 10 to 11-inch range as measured at the shoulder. The maximum weight for a non-obese specimen will be in the range of 22-24 pounds.

Due to the broad range of parental stock used to create them, Sealyham Terriers are prone to only a handful of common complaints. Not surprisingly, these tend to be concentrated in the area of the eyes, where their long facial hair provides a breeding ground for infections and ailments. Overall, however, their health is excellent.

Retinal Dysplasia occurs at birth and is a slight deformation of the retina. This does not usually affect the vision to any appreciable degree. Since these are purebred dogs, it is recommended that any specimen which displays this condition be excused from duties as a breeder in order to help eradicate the future transmission of the malady.

Lens luxation, or deterioration of the eye ligaments, is infrequently found. It can be treated with either medication in mild cases or surgery in more pronounced ones. In really severe cases, luxation may require removal of the eye.

The only really breed specific ailments are:

The most notable trait of a Sealyham Terrier is its relatively non-terrier personality. Whereas terriers, in general, are very high energy and even frantic at times, Sealyham Terriers are much more sedate in outlook. This makes them a much better choice for people who live in apartments or other small spaces.

They are friendly, intelligent, and playful. This makes them very good companions in almost all situations. Although they are less renowned for clowning around like other terriers, they can still caper and jump with the best of them.

Bred as a pack hunting animal, Sealies get along well with other dogs when they have been properly introduced. At the same time, their firm, independent outlook on life makes them stand out as individuals. They are soon regarded very much like living beings in their own right rather than just as a dog or a pet. They look upon themselves and expect to be looked upon by others, as their own distinct entity. This makes them extremely superior companions that are much beloved by their owners virtually as a rule.

As individuals, however, they are also prone to such individualistic behavior as an unwillingness to share their possessions with others. They can also resent harsh or even accidentally harmful treatment. This can lead to a quick snap at whoever is hurting or annoying them, which makes it less desirable to have them around small children. An innocent grab at their ears or picking up one of their toys can result in a passing burst of emotion.

How To Take Care Of Sealyham Terriers

Sealyham Terriers are a relatively low maintenance breed of dog. They are capable of living inside for long stretches of time provided they get a daily walk. They are not known for separation issues so they can be left at home during the day without fear of damage to the premises.

They do not require an excess of brushing or clipping. They are not fond of heat and are primarily regarded as indoor dogs in modern times. Out in public, keeping them on a leash is all but imperative due to their inquisitive nature and their near-automatic switch into hunting mode when faced with moving objects.

Like most modern dogs, it is important to guard against obesity by feeding them high-quality dog food in proper portions. Somewhere between 1 and 1¼ cups of food is usually sufficient for their needs. As always, this is to be split up as a morning and evening meal. Their easygoing nature makes them the most likely of the terrier breeds to need dietary control, additional exercise, or both to keep them fit and happy.

The big trade-off in grooming Sealies is the need to either pluck out dead hairs from their coat manually or to have them groomed professionally. Plucking is time-consuming but leads to a dog that sheds much less. Grooming creates a softer coat but one that is much further from being hypoallergenic. It also adds to the cost of maintenance for your pet.

As an indoor dog, it is also necessary to keep their nails clipped. This prevents damage to floors as well as to any humans that they jump upon to greet with enthusiasm. Typically, when you can hear a dog’s nails clicking on the floor, they are in need of some trimming.

All terriers are very strong-willed dogs. This means that they do not quit and cannot be easily turned from their task. With these basic traits in mind, it can be seen that a Sealyham Terrier represents something of a challenge so far as training is concerned. It is not that they cannot or will not be trained but that they must be taken firmly in hand from an early age and held to consistent standards of behavior.

Once they have accepted training, however, those same resistant traits become real advantages. Now they will carry on as they have been instructed to do and will be much less likely to deviate from what they have been taught. Getting impatient is the real risk when training these animals. It is a battle of wills and you simply must show that you have the stronger will. Otherwise, it is you who ends up getting trained.

These dogs are notable for being the calmest and most indoor-friendly of all the terriers. This does not mean that they can get by without daily exercise such as romping in the back yard or being taken on a nice long walk. This is particularly the case for Sealyham Terriers that are apartment dwellers. No matter how careful you are with their food intake, they will simply balloon if they are not given an opportunity to burn off surplus energy every day. They do not require the same amount of exercise as other terrier breeds, but they must have some.

Because they are rare and often require long waits before taking ownership, you will want to take special precautions with your new puppy. Unlike with other breeds, replacements cannot be obtained on the spot. Breeders may indeed refuse to sell another puppy if the first one is quickly lost, no matter the cause.

Their instinct to hunt and roam means that you must take special care not to let them get out except under controlled conditions. Protect your investment with high-quality puppy food, make sure you have all their licenses and shots in order, and start very early by instructing them on how they are expected to behave in life. Sealyhams are particularly noted for being difficult to paper train. They are fine once they have been trained, but it takes extra effort to get this hurdle over and done with.

These dogs are not recommended for families with smaller children. They make excellent companions for older kids who can be taught the requisites of living with one of these feisty pets. Younger children do not fully grasp a Sealyham’s protective nature when it comes to his food and his toys. The dog may also react abruptly if it is unexpectedly grabbed or struck, whether accidentally or in play. For family members who understand how to treat a Sealyham Terrier properly, they are great fun to be around.

Probably the best-known dog of similar appearance is the Scottish Terrier or Scottie. Other terriers also exhibit some or all of the Sealyham’s characteristics in either color or overall build. Among these are the West Highland White Terrier and the Soft Coated Wheaten Terrier.

View all 96 animals that start with S

What Is A Sealyham Terrier?

A Sealyham Terrier is a small white dog bred originally in Wales for the purpose of hunting small game. Resolute, companionable, and lovably shaggy in his facial features, the Sealie is also an excellent watchdog and is well suited for life in urban spaces.

How Much Does It Cost To Own A Sealyham Terrier?

When they can be found, a Sealyham Terrier puppy will cost somewhere between 1500 and 3000 dollars. Annual costs thereafter are modest due to them not needing much in the way of grooming and special veterinary care.

Are Sealyham Terriers Good With Children?

Really, no. They are fine with older children but not a good match for toddlers. These are not the best dogs in situations where infants and puppies grow up together.

How long do Sealyham Terriers Live?

The average life expectancy of the breed is 12-15 years.

They are not fully hypoallergenic but shed little when cared for properly.

How Many Sealyham Terriers Are There In The World?

This is a very rare species, almost in need of rescue. Once extremely popular, the Sealyham Terrier is now a coveted designer dog available only in very limited numbers and at a high price. For example, the UK Kennel Club registered several thousand per year in the 1920s but only 48 were registered by the same club in 2009.