The banjo catfish is extremely shy and known for hiding from onlookers. Click through all of our Banjo Catfish images in the gallery. 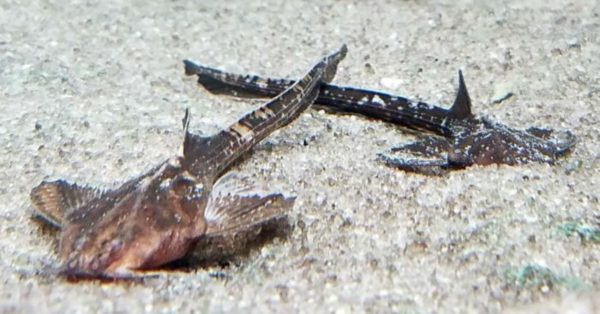 View all of the Banjo Catfish images!

The Banjo Catfish is native to South America. With plenty of nicknames such as “guitarrita catfish,” and “burrowing catfish,” this unique species stands out for its odd, banjo-like body shape and reserved behaviors. Often confused for a piece of tree bark, the fish prefers to live alone in slow moving waters.

The scientific name for banjo catfish is “Bunocephalus coracoideus” and “Aspredinidae”, but it is more commonly referred to as “banjo fish,” “burrowing catfish,” or “guitarrita catfish” in Latin America. Banjos belong to the order Siluriformes, which are more commonly known as “catfish.” Banjo catfish consist of 43 species. Their phylum is Chordata, which consists of well-known vertebrates such as other fish, birds, and mammals.

These fish consist of 43 different species, all known for their unique body shape and small size. All banjo catfish dominate South American countries such as Brazil, Uruguay, and Bolivia. The average size of this fish is about 6 inches, with the largest species reaching up to 15 inches long. They tend to have a muddied coloring and rough skin texture which is typical for all 43 species.

Famous for its banjo-shaped body, this catfish variety has a few other interesting features that distinguish it from other types of fish. Its skin is heavily keratinized which gives it a rough texture and bumpy appearance. In addition to this, it tends to have a variety of different earth-toned coloring in its skin such as brown, yellow and black. As a result, it is often confused for a piece of tree bark.

They also have a distinctive wide and flat face which helps them burrow in sand and debris to hide from predators. Its eyes are small in comparison to the size of its face, making it one of the most unusual-looking catfish varieties. It is also one of the smallest catfish on the planet, measuring at under 15 inches in length.

These fish belong to the larger family of catfish which are extremely common throughout the world. This specific variety heavily populates South American rivers, ponds, and streams. It can thrive in most warm, freshwater environments as long as the water is slow-moving. They prefer to stay in one location once they’ve made it their home and do not feel the need to leave to breed. Banjos prefer bodies of water with plenty of sand, twigs, and other debris at the bottom for them to burrow in.

Well known for scavenging, banjos are not picky when it comes to eating. This fish will consume just about any prey that it can catch. Due to their slow-moving nature, they tend to stick with earthworms, bloodworms, and tubifex. However, they may also consume other small fish, birds, and other mammals around their habitat.

Common predators of this fish include larger fish, birds, and mammals that are able to find them. Since they are nocturnal and tend to hide for prolonged periods of time, they are one of the most difficult fish to catch.

In the process of spawning, banjo catfish will ejaculate an average of 200 eggs directly into the water. A male will then immediately fertilize the eggs and they will sink to the bottom in sticky, green clusters. It only takes a few days for the eggs to develop into larvae.

Within a week, the larvae will grow into juveniles and begin to develop coloring which will fluctuate until they are fully grown. Within one year, they are able to reproduce. Most full-grown fish enjoy an average life span of eight to 12 years in the wild.

Banjo Catfish in Fishing and Cooking

Due to their extremely rough skin texture, small size and difficulty to catch, they are not a common fish used for cooking. However, their unique appearance and peaceful nature has made them a popular pet for sale across the world.

This fish does well in community aquariums since it prefers to be a loner and can often be found burrowing at the bottom of tanks. They are commonly found for sale in exotic pet stores and are easy to care for. Banjos for sale as pets require an average-sized tank, plenty of sand, and minimal care.

The population of banjo catfish is stable and has not changed much in modern times. This fish is not currently marked as endangered, nor do scientists predict it will be any time in the foreseeable future.

Where are Banjo Catfish Found?

Banjo catfish can be found scattered through South America in slow-moving bodies of waters.

How Big Do Banjo Catfish Get?

Banjo catfish are one of the smallest types of catfish and average four to 15 inches in length once full grown.

Why is it called a banjo catfish?

This fish has earned the name “banjo” due to its unique body shape which is reminiscent of the musical instrument.

What do Banjo Catfish Eat?

Banjo catfish will eat just about anything they can catch and fit in their mouth. However, they are slow-moving and as a result, prefer slow prey such as worms and tubifex. Banjo catfish kept as pets are flexible when it comes to feeding and don’t care if they are given flakes or frozen worms.

Where are Banjo Catfish From?

Banjo catfish are from South America.

What is the Smallest Species of Banjo Catfish?

The eel-tail banjo catfish is considered the smallest species. It measures just under four inches from head to tail.