The frogfish can change colors, but it takes several weeks to do so

Colour
Skin Type
Scales
Lifespan
As much as 20 years
Weight
At least 1.12 ounces
Length
2 to 16 inches

Click through all of our Frogfish images in the gallery. 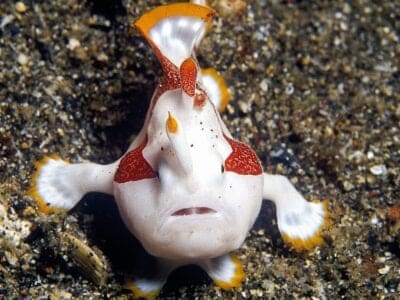 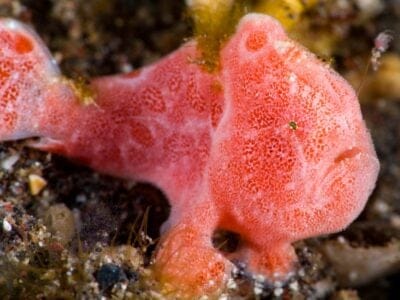 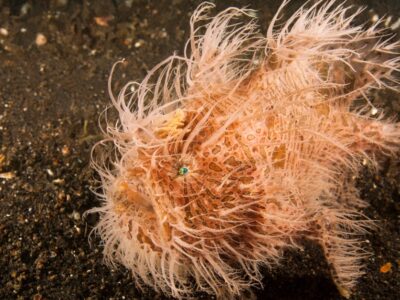 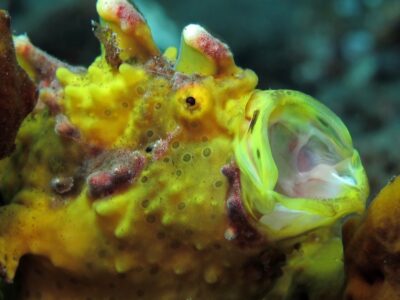 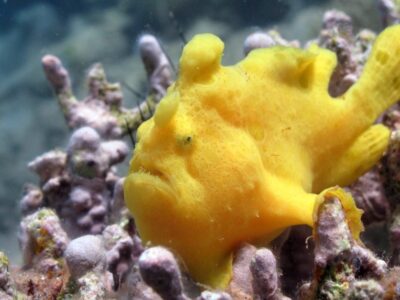 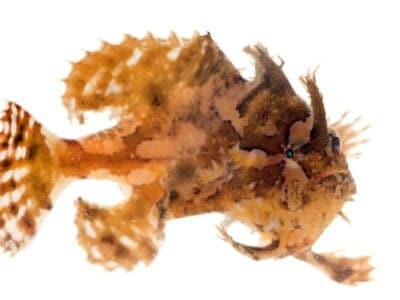 View all of the Frogfish images!

“Frogfish – The good, the bad and the ugly”

Frogfish are a group of fish that belong to the Antennariidae family. This makes them part of the anglerfish family, which uses camouflage and lures to draw in potential prey. These fish fascinate people with their behavior, as they usually lie in wait on the seafloor and move slowly until they don’t. When they snap up their prey, they can strike in mere milliseconds.

Frogfish belong to the Antennariidae order and are divided into at least 14 genera and 52 species. Some of the genera contain the word phryne, which is derived from phrúnē, the Greek word for “toad.” They include Phyllophryne, which means something like “leaf-shaped toad,” from the Greek phyllos, which means “leaf.” Porophryne most likely means “porous toad,” since this fish mimics the sponges that it hides among. The Sargassum fish, Histrio histrio gets its name from the Latin word for “actor” for its behavior. The way it ambushes and gulps down its prey is quite dramatic.

Frogfish are found in reefs in most warm ocean waters. Though they mostly live in the shallows, they can be found as deep as 984 feet. Species include:

The frogfish is a singularly weird-looking animal, but its weirdness has a purpose. Most species are small and come in a wealth of colors. Their bodies are roundish and compressed. Their first dorsal fin is separate from the other dorsal fins and has evolved into a lure or esca. The esca is sometimes attached to a rod-like structure called the illicium, which gives the fish its other name of anglerfish. In some species, the esca glows thanks to the action of bacteria and chemicals contributed by the fish.

The frogfish uses its pectoral fins much like limbs to crawl around the seafloor and even climb. Its skin is often covered with lumps, bumps, flaps, eyespots, and spinules. These spinules can be so long and delicate that they give the hairy frogfish its name. On top of this, algae and other primitive organisms can live on the fish’s skin. It has an upturned mouth that can expand to 12 times its original size when opened. Because of this, the frogfish can swallow prey larger than it is. It also has teeth in its palate. Tiny holes behind the pectoral fins serve as gill openings. The pelvic fins help the fish “walk” and hold it steady during an ambush.

Scientists aren’t sure of the precise number of frogfish in the world, but they recognize at least 52 species. They are found all around the planet in warmer waters, though they are strangely absent from the Mediterranean Sea. The IUCN has not evaluated most of the population, though the flagpole frogfish is listed as least concern.

Frogfish are found in coral reefs and rocky reefs, and many species like to blend in with sponges. The Sargassum fish, however, lives its life cycle among the floating seaweed in the Sargasso Sea, and its coloration matches that of the seaweed.

Baby frogfish are easy prey for other marine animals, including sea birds. Adults, with their camouflage, are harder to find, but even they are eaten by scorpionfish, moray eels, lizardfish, and other frogfish.

Despite the differences in lures, the frogfish isn’t picky about what it eats. It eats fish, crabs, and shrimp, even if the meal is larger than itself. It not only has that gaping maw, but it also has a very expandable stomach.

Scientists don’t know a great deal about the frogfish life cycle and reproduction, but they do know that most females free-spawn, or simply deposit their eggs in the water. The male then fertilizes them externally. Just before she’s ready to lay eggs, which can be as many as 180,000, the female swells up like a balloon. This may be what attracts the male, who follows her around, cautiously, as females can be many times larger than males and have no problem killing and eating them. The pair swim close to the water’s surface then releases the eggs and sperm together. Then, they separate.

There are other frogfish that lay their eggs on rocks or plants, and others where the eggs stick to the male. For example, Histiophyrne males carry the eggs in a pouch behind their pectoral fins.

The eggs hatch two to five days after they’re laid, and the baby frogfish lives on its yolk sac until it’s ready to eat solid food. When they are between 0.59 and a little over an inch long they start to look like replicas of their parents and sink to the bottom of the sea. They can live as long as 20 years in the wild, but most frogfish live a few years.

Frogfish in Fishing and Cooking

Another of the facts about frogfish is that they do not make good eating and are not deliberately fished. However, they are sometimes caught in nets meant for shrimp.

Scientists do not really know the frogfish population, and most species have not been evaluated. Some are kept as pets, but since their behavior is as voracious as it is, they are best kept separate from other fish.

View all 42 animals that start with F

Where are frogfish found?

They are found in the warm areas of oceans all around the world.

What does a frogfish eat?

A frogfish basically eats whatever comes within striking distance. This includes crabs, shrimp, and other fish. They are not above cannibalism.

They do change color, but slowly.

What kind of fish is a frogfish?

A frogfish is a ray-finned fish or a member of the Actinopterygii order. It is part of a family named Antennariidae.

Where do frogfish live?

Frogfish live mostly in reefs, though the Sargassum fish lives amongst the seaweed in the Sargasso Sea, a body of water in the North Atlantic Ocean. The fish completes its entire life cycle in this sea.

The frogfish really doesn’t look like a frog, though it was named because its pectoral fins look like a frog’s front legs. It is roundish, with a flattened body. Most don’t have scales, but their skin is full of lumps and bumps and ornamentation that can even make it look hairy. The frogfish comes in all sorts of colors and patterns to blend in with the habitat where it lives.