Found throughout Asia, India and China!

Click through all of our Masked Palm Civet images in the gallery. 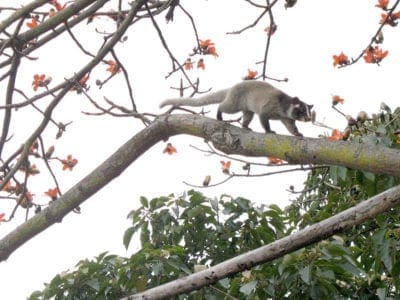 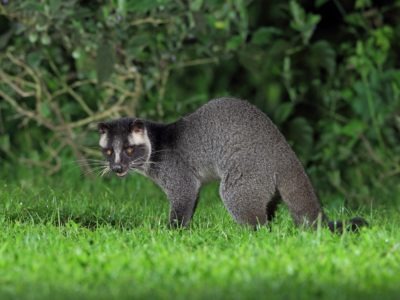 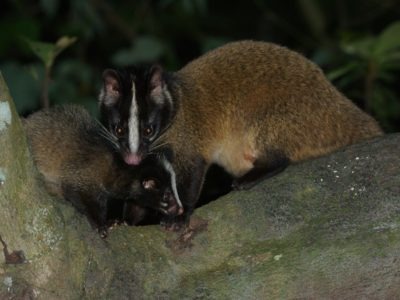 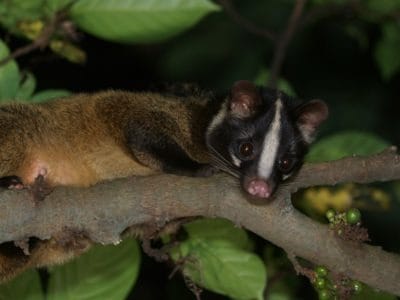 View all of the Masked Palm Civet images!

Masked palm civets are arboreal spending most of their time in trees. They are omnivores eating both small animals and fruit. These mammals live in the south and Southeast-Asia. These civets live to be around 10 years old in the wild and can live up to 20 years in captivity. They sleep all day and hunt at night.

The scientific name of a masked palm civet is Paguma larvata. It also goes by the name gem-faced civet or the Himalayan civet. In Malaysia, they are known as Musang. In order to have the correct pronunciation of civet, remember that the c sounds like an s. Its pronunciation is easy when you know that civet rhymes with the word visit.

This animal belongs to the Viverridae family and the class Mammalia. There are at least 13 subspecies of masked palm civet. Some of the civets in this family include:

This mammal has a coat of short gray hair as well as black hair on its face. A white stripe of fur begins on its nose, runs between its eyes and up its forehead. Its dark eyes are highlighted by the white fur around them. This mammal’s long tail is thick and covered with gray fur. Its rounded ears are about an inch long making a masked palm civet look like a cross between a cat and a raccoon. But, when it comes to close relatives, this mammal is more closely related to a mongoose than it is to a cat.

The length of these civets ranges from 20 to 30 inches with a tail that adds on an extra 20 to 25 inches. They usually weigh from 8 to 11 pounds. The heaviest this mammal can get is 13 pounds. If you laid 14 golf tees on the ground end to end, you’d have the same length as a 30-inch-long masked palm civet. An 11-pound gem-faced civet weighs as much as the average housecat.

These civets are able to spray predators with a stinky scent from glands in their body. This is similar to what a skunk does to protect itself from predators. Scientists believe that the white design on this animal’s face serves as a signal to its predators that it can be dangerous.

Masked palm civets are fast climbers. This is another way they can get away from predators or other threats.

This mammal is solitary and tries to stay out of sight. But, like any animal, it can be aggressive if it feels threatened.

These civets live in southern and Southeast-Asia. They are found in several countries including Bangladesh, Bhutan, Brunei, Cambodia, China, India, Malaysia, Myanmar, Pakistan, and Vietnam.

There have been some sightings of masked palm civets in Singapore. They make their way into urban areas building nests in the attics of homes in and around Singapore.

They live in tropical and temperate climates. These animals spend 80 percent of their time in trees so it’s no surprise they are found in tropical moist forests, tropical dry forests, temperate broadleaf forests and grasslands.

This animal uses its tail to hang onto branches as it climbs high into trees for pieces of fruit or to make a nest or bed. It is nocturnal so its eyes are designed to see clearly in the dark.

What do these civets eat? These mammals eat fruit, leaves, rodents, frogs, insects, and small birds. Like most animals, they eat the prey that’s most plentiful in their environment.

These civets play an important part in the ecosystem. They eat a lot of fruit. After digesting the fruit, they drop the seeds throughout the area via their fecal matter. This is called seed dispersal. These seeds grow into new types of vegetation.

Tigers, hawks, crocodiles, and leopards are all predators of the gem-faced civet. Humans are also a threat to these animals. They are hunted for their meat. This civet meat is eaten in Vietnam, southern China, and other places.

In addition, they are losing their habitat due to deforestation.

The official conservation status of the masked palm civet is Least Concern with a decreasing population.

The breeding season of these civets falls in the spring as well as in late autumn. These animals have multiple partners. The gestation period of a female is 75 to 90 days and she can have 2 litters of babies per year. A female masked palm civet is likely to have her babies in a hollowed-out tree. A litter contains from 1 to 4 babies, also called pups. Each pup weighs around 3 ounces. They are born with their eyes closed and completely dependent on their mother.

A pup’s eyes open when it reaches about 10 days old. This is when the pups begin to walk. They are nursed by their mother for the first 6 weeks of life. By two months old, the pups are completely weaned and can capture their own prey.

A masked palm civet in the wild lives to be around 10 years old. In captivity, they can live to be up to 20 years old.

Though it’s not a common ailment, these civets have been connected with severe acute respiratory syndrome also known as SARS. In 2003, there were 6 cases of masked palm civets with SARS found at wild animal markets in Shenzhen, in southern China. Scientists aren’t sure how the civets contracted SARS. These mammals are known for having passed SARS to humans.

Though the exact number of these civets is unknown, they are listed as Least Concern by the IUCN Red List of Threatened Species. Their population is believed to be decreasing due to loss of habitat and poaching activity.

This animal enjoys protection under the law in Gansu, China as well as in Malaysia.

What kind of an animal is a masked palm civet?

A masked palm civet is a small mammal that lives in trees most of the time. They are nocturnal and sleep in a nest or bed high in the treetops during the day. This mammal has the ability to spray a foul scent to ward off predators. In this way, it’s similar to a skunk. It lives in areas of south and Southeast-Asia including China, Indonesia, Thailand, and Malaysia. In Singapore, these mammals sometimes build their nests in the attics of homes.

What is the scientific name for a masked palm civet?

The scientific name for a masked palm civet is a Paguma larvata. When learning the pronunciation of the word civet, remember that the c sounds like an s, and the word rhymes with visit.

What do masked palm civets eat?

This mammal has gray fur on its body and tail. Its face features black fur with a white stripe running from its nose to its forehead. This is known as its mask. The mask design on its face makes it look like a raccoon while its short, rounded ears make it look like a cat!

How big is a masked palm civet?

The body of a masked palm civet can be from 20 to 30 inches long. Plus, its tail adds another 20 to 25 inches in length. Normally, this mammal weighs from 8 to 11 pounds but sometimes can weigh as much as 13 pounds.

What Kingdom do Masked Palm Civets belong to?

What phylum do Masked Palm Civets belong to?

What class do Masked Palm Civets belong to?

What family do Masked Palm Civets belong to?

What order do Masked Palm Civets belong to?

What type of covering do Masked Palm Civets have?

In what type of habitat do Masked Palm Civets live?

What are some predators of Masked Palm Civets?

Predators of Masked Palm Civets include lions, snakes, and leopards.

How many babies do Masked Palm Civets have?

The average number of babies a Masked Palm Civet has is 2.

What is an interesting fact about Masked Palm Civets?

Masked Palm Civets are found throughout Asia, India, and China!

What is the lifespan of a Masked Palm Civet?

Masked Palm Civets can live for 15 to 20 years.