Secretes up to 4g of musk every week!

Click through all of our African Civet images in the gallery. 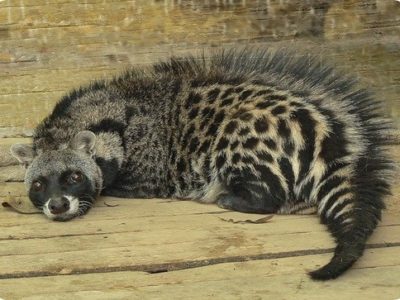 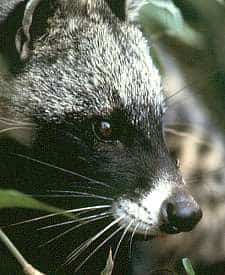 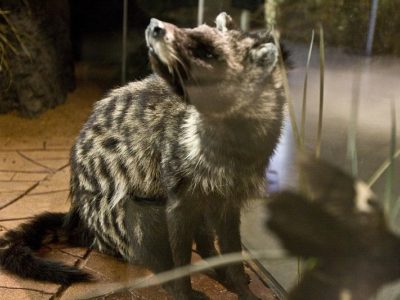 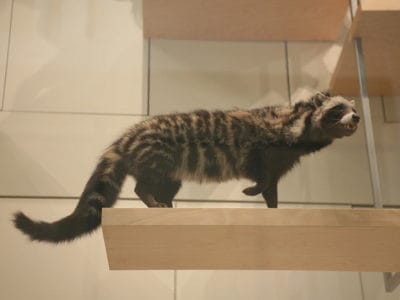 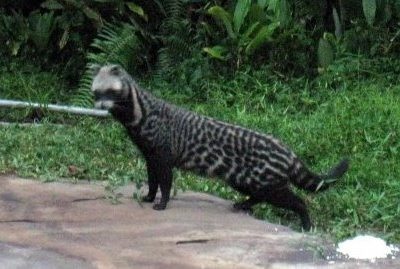 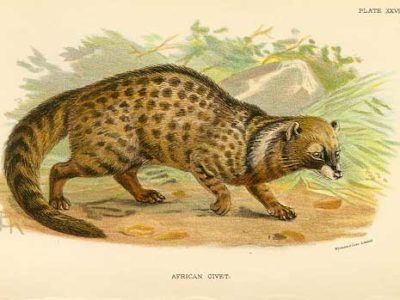 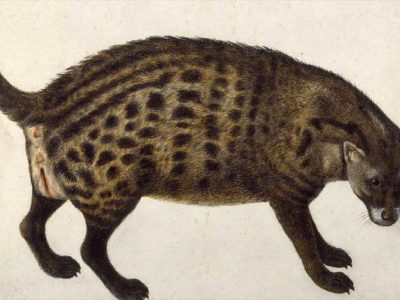 View all of the African Civet images!

The African Civet is a large species of Civet found across sub-Saharan Africa. The African Civet is the only remaining member in its genetic group and is considered to be the largest Civet-like animal on the African continent. Despite their cat-like appearance and behaviours, the African Civets are not felines at all but are in fact, more closely related to other small carnivores including Weasels and Mongooses. The African Civet is most well known for the musk that it secretes to mark its territory (called Civetone), which has been used in the manufacturing of perfumes for centuries, and its striking black and white markings, make the African Civet one of the easiest Civet species to identify.

One of the African Civet’s most distinctive features are the black and white markings on their fur and grey face, which along with the black band around their eyes, gives these animals a Raccoon-like appearance. The similarity is only heightened by the fact that the African Civet’s hind legs are quite a bit longer than the front legs, making its stance very different to that of a Mongoose. The average adult African Civet has a body length of around 70cm with nearly the same length tail on top of that. The paws of the African Civet each have five digits with non-retractable claws to enable the Civet to move about in the trees more easily.

The African Civet is found in a variety of habitats on the African continent, with its range extending from coast to coast in sub-Saharan Africa. African Civets are most commonly found in tropical forests and jungles and areas where there is plenty of dense vegetation to provide both cover and animals that the African Civets feeds on. African Civets are never found in arid regions and always must be in an area which has a good water source. Despite this though, it is not uncommon for African Civets to be found along rivers that lead into the more arid regions. They are capable swimmers and often spend their time hunting and resting in the trees as well as on the ground.

The African Civet is a solitary animal that only comes out under the cover of night to hunt and catch food. These nocturnal animals are primarily tree-dwelling creatures that spend most of the daylight hours resting in the safety of the trees high above. African Civets tend to be most active just after sunset but tend to hunt in areas that still provide plenty of cover. Despite being generally very solitary creatures, the African Civet has been known to gather in groups of up to 15 members particularly during the mating season. They are also highly territorial animals, marking their boundaries with the scent released by their perineal glands.

The only time when African Civets seem to be seen together is when they are mating. The female African Civet usually gives birth to up to 4 young after a gestation period that lasts for a couple of months. The female African Civet nests in an underground burrow that has been dug by another animal in order to safely raise her young. Unlike many of their carnivorous relatives, Civet babies are usually born quite mobile and with their fur. The babies are nursed by their mother until they are strong enough to fend for themselves. African Civets can live for up to 20 years, although many rarely get to be this old.

Despite being a secretive yet a relatively ferocious predator, the African Civet is actually preyed upon by a number of other predators within their natural environment. Large predatory Cats are the most common predators of the African Civet including Lions and Leopards along with reptiles such as large Snakes and Crocodiles. African Civet populations are also under threat from both habitat loss and deforestation, and have been subject to trophy hunters in the past, across the continent. One of the biggest threats to the African Civet is the want for their musk.

The musk secreted by the glands close to the African Civet’s reproductive organs has been collected by Humans for hundreds of years. In its concentrated form, the smell is said to be quite offensive to people, but much more pleasant once diluted. It was this scent that became one of the ingredients in some of the most expensive perfumes in the world (and made the African Civet a well-known African animal). African Civets are known to carry the rabies disease, which is contracted through contact with an already infected animal. The African Civet is also known to use designated areas around its territory, where it is able to go to the toilet.

Each African Civet secretes up to 4g of musk every week, which is normally collected from African Civets in the wild. However, the capturing and keeping of African Civets for their musk is not unknown and is said to be an incredibly cruel industry. Today, few perfumes still contain actual musk from the glands of an African Civet as many scents today are easily reproduced artificially. Although it is a protected yet not an endangered animal, the African Civet populations have also been severely affected by Human hunters, who hunt these little carnivores to simply add their skin to the trophy cabinet.

African Civets are Omnivores, meaning they eat both plants and other animals.

What Kingdom do African Civets belong to?

What phylum to African Civets belong to?

What family do African Civets belong to?

What order do African Civets belong to?

What is the biggest threat to the African Civet?

The biggest threat to the African Civet is habitat loss.

How to say African Civet in ...