The most widely distributed tortoise in Africa! Click through all of our Leopard Tortoise images in the gallery. 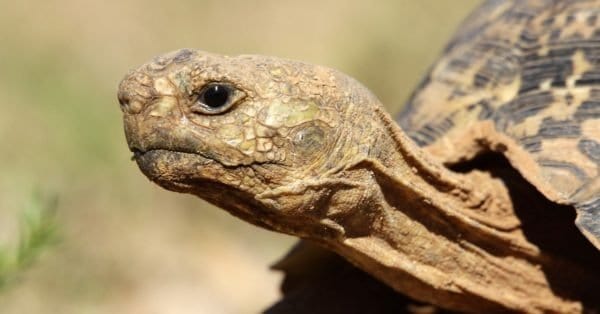 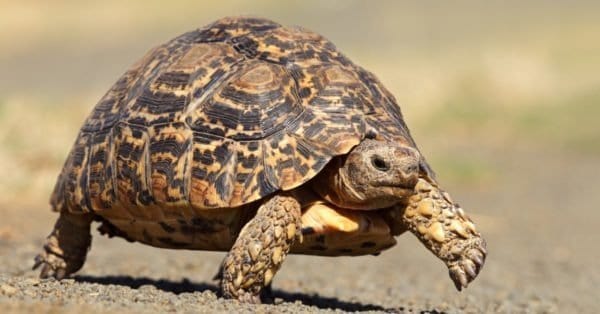 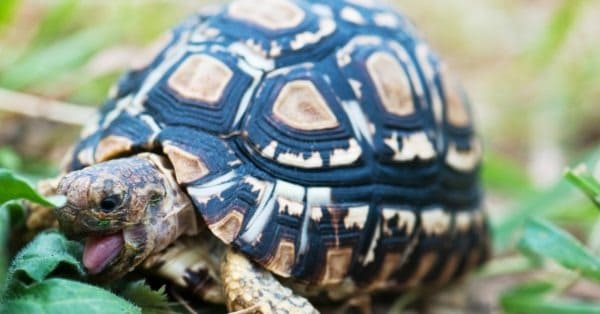 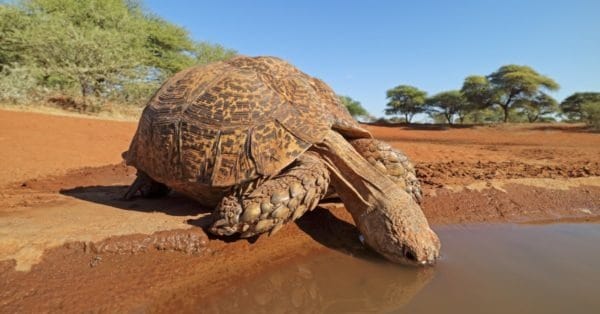 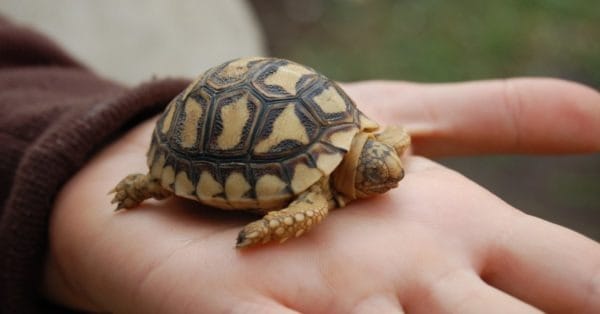 View all of the Leopard Tortoise images!

The leopard tortoise is among the heavyweights of the tortoise world.

Weighing an average of 40 pounds, this species is quite a common spectacle around the savannas of sub-Saharan Africa. Like the big cat for which it’s named, the leopard tortoise has unmistakable black and yellow markings, each one completely unique to the individual. Despite the occasional threat to its survival, this species was built to survive.

The scientific name of the leopard tortoise is Stigmochelys pardalis; pardalis is simply the Latin word for leopard. This species was once part of the genus Centrochelys, but after some debate, it was later moved to the genus of Psammobates, which includes several species of South African tortoises. Eventually, it found a permanent home in Stigmochelys, of which the leopard tortoise is the only living member.

The scientific name of this genus comes from the combination of two Greek words meaning stigma and tortoise. Taxonomists have also debated whether the leopard tortoise represents a single cohesive species or two independent subspecies, but a lot of research supports the former conclusion that genetically there are no separate subspecies.

The leopard tortoise is considered to be the fourth largest tortoise species in the world. A full-grown tortoise can easily reach between 12 inches and 28 inches in length and grow up to 100 pounds, or about the size of a large dog, though the average tortoise is only about 40 pounds. Males and females are very difficult to tell apart from appearance alone unless you really know what you’re looking for. There are some minor differences in average size between the sexes, but these facts are usually outweighed by individual differences.

The leopard tortoise’s domed shell, which is fused to the rest of the body through the ribs, is composed of two basic parts: the upper carapace and the lower plastron. The very round and steep carapace is covered with alternating black and yellow patterns which give this species its name (or, in the case of a rare variation, a snow-white and black pattern). These colors and patterns are far more prominent in juveniles and young adults. In mature adults, the markings fade toward brown and grey. The shell itself is composed of a patchwork of tough scutes: basically scales overlaid with horned plates. The suture lines of the scales are covered and reinforced by the plates, which gives additional strength to the shell. Contrary to popular belief, it is not possible to distinguish the tortoise’s age by the appearance of the shell or body.

The leopard tortoise spends most of the day either sleeping or foraging for food. Although its movement appears to be slow and cumbersome, this tortoise has been known to undertake long treks in search of better foraging spots. It is most active during the moderate parts of the day at dawn and dusk. Due to the large temperature fluctuations throughout the entire 24-hour period, the tortoise seeks shelter in holes or shade during the day to avoid the hammering rays of the sun and sleeps during the night when it’s cold.

The colors of the leopard tortoise are not just for show. They provide some camouflage against the backdrop of the African environment and vegetation. Whenever it’s spotted by a predator, the leopard tortoise has the ability to withdraw into the shell to protect itself. This shell is so impregnable that it can wait out almost any threatening animal.

Except in the breeding season, when social hierarchies are established, the leopard tortoise is a solitary grazer with a very loose social organization and very little communication skills. When the breeding season does finally approach, the tortoise becomes quite a bit noisier, since the call helps it attract mates and outcompete other males. And when it chooses a mate, the male will also make grunting sounds during copulation. The only other time it really makes a sound is when the tortoise retracts its shell. This produces a hissing sound due to the forced expulsion of air from the lungs.

The leopard tortoise relies primarily on its sense of smell to locate and track down food. Vision appears to be an important aspect of its perception, but it isn’t clear that the tortoise can distinguish between different colors. And although lacking visible ear flaps, it is also able to sense sounds and vibrations at low frequencies.

The leopard tortoise has a large range that extends through much of sub-Saharan Africa. From temperate grasslands to dry plains, it prefers warm habitats with low-lying vegetation. It is not well-adapted for wet or cold regions with heavy rain or snow at all.

The leopard tortoise is an herbivorous grazer that always seems to be searching for or eating food. Lacking teeth, the animal’s sharp beak and strong mouth help it to rip and tear vegetation with ease. They also play an important role in the ecosystem by dispersing undigested seeds throughout the entire environment.

What does the leopard tortoise eat?

The leopard turtle is often threatened by hunting, poaching, and predation, but it’s not entirely clear whether this has a significant effect on population numbers. Sometimes they are caught and put up for sale on the international pet trade (despite the fact that they are also bred in captivity). Sometimes they are hunted for their meat or shells. And sometimes they are just killed because they are a nuisance that feeds on crops and gardens.

What eats the leopard tortoise?

With its tough shell and camouflaged colors, a full-grown leopard tortoise is preyed upon by few other animals besides maybe humans and lions. But approximately 80% of young tortoises are lost to foxes, storks, lizards, mongooses, and many other predators before they can even reach adulthood.

At the approach of the traditional breeding season between May and October, male tortoises will engage in fearsome and aggressive competitions with each other for access to mates. Once one emerges victorious over his rivals, the winning male will chase after a potential mate for days or even weeks at a time just for the opportunity to mate with her. It is not uncommon for the female to attempt an escape, so when he finally catches up with her, the male will attempt to immobilize her with repeated strikes of his head.

After mating is complete, the female will dig a deep hole in the ground to lay her eggs. She can lay five to seven clutches a year, each of which contains five to 30 eggs. The sex ratio of the clutch is actually determined by the surrounding environmental temperature. Temperatures over 86 degrees Fahrenheit tend to result in more females than males.

After laying her eggs and covering them with dirt and leaves, the mother soon departs to later prepare a new nest. Neither she nor the father invests much time and effort into the care of the young. For the next nine to 12 months, the eggs will remain hidden from view, though they are still vulnerable to predators that happen to find them and dig them up. If they survive this period, then the hatchlings emerge from the eggs weighing just a fraction of a pound but ready to forge a new independent life of their own.

At this early stage, young adults exhibit a very strong black and yellow pattern over their body with prominent stripes, spots, or dashes, which fade more toward brown and gray as they age. Both males and females start to become sexually active after about 12 to 15 years. These exceptionally long-lived animals can reach ages of up to 100 years in the wild.

The leopard tortoise is currently threatened in the wild by poaching, hunting, and habitat loss, but this has not yet changed its conservation status. It’s currently classified as a species of least concern by the IUCN Red List. Although total worldwide population numbers are not well-known, the country of Tanzania in East Africa appears to have the largest number of tortoises with about 6,000 individuals remaining. Anti-poaching laws have prevented some people from putting them up for sale on the international pet trade.

Leopard Tortoise in the Zoo

The leopard tortoise is a prime exhibit at the Maryland Zoo, the Central Florida Zoo and Botanical Garden, Utah’s Hogle Zoo, the Saginaw Children’s Zoo in Michigan, the Alexandria Zoo in Louisiana, and the Living Desert Zoo in Palm Desert, California. Outside of the United States, you can find these magnificent animals at the Welsh Mountain Zoo and Twycross Zoo in the UK and the Auckland Zoo in New Zealand.

What Kingdom do Leopard Tortoises belong to?

What class do Leopard Tortoises belong to?

What phylum to Leopard Tortoises belong to?

What family do Leopard Tortoises belong to?

What order do Leopard Tortoises belong to?

What genus do Leopard Tortoises belong to?

What type of covering do Leopard Tortoises have?

Leopard Tortoises are covered in scales.

In what type of habitat do Leopard Tortoises live?

What is the main prey for Leopard Tortoises?

What are some predators of Leopard Tortoises?

Predators of Leopard Tortoises include cats, dogs, and humans.

What are some distinguishing features of Leopard Tortoises?

How many eggs do Leopard Tortoises lay?

What is the scientific name for the Leopard Tortoise?

The scientific name for the Leopard Tortoise is Stigmochelys pardalis.

What is the lifespan of a Leopard Tortoise?

Leopard Tortoises can live for 50 to 100 years.

How fast is a Leopard Tortoise?

A Leopard Tortoise can travel at speeds of up to 0.3 miles per hour.

How big does a leopard tortoise get?

The leopard tortoise can grow up to 28 inches and 100 pounds, but the typical specimen is more like half this size.

Where do leopard tortoises live?

The leopard tortoise lives in the savannas and deserts of sub-Saharan Africa. It relies on low-lying vegetation as its main source of food.

What do leopard tortoises eat?

The diet of the leopard tortoise consists of mixed grasses, succulents, and thistles. If the tortoise is in dire need of nutrients, then it might feed on leftover bone fragments.

How long does it take a leopard tortoise to grow?

The growth rate of an individual can vary based on many different factors, such as the availability of food, but the tortoise usually stops growing at the time of sexual maturity around 12 to 15 years of age.

How long do leopard tortoises live in captivity?

A full-grown leopard tortoise can live between 80 and 100 years in captivity.