This species is named after the loud whooping sound it makes Click through all of our Whooping Crane images in the gallery. 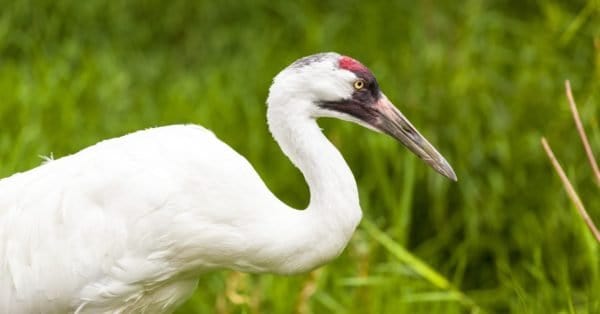 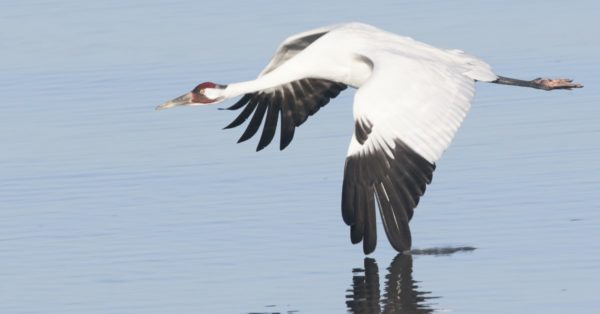 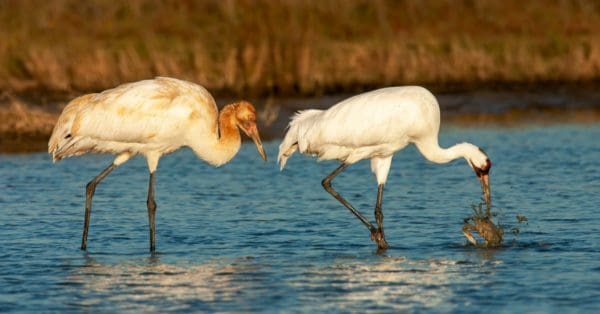 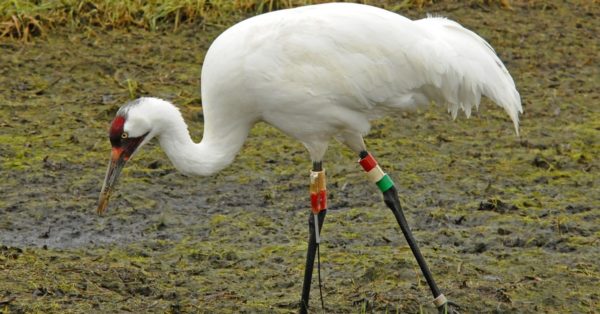 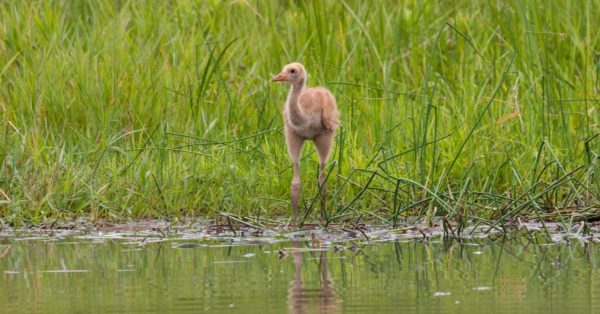 View all of the Whooping Crane images!

The whooping crane is among the largest and most distinguished birds of North America.

Centuries ago, this species was seen in large numbers across the country. But after years of overhunting and habitat destruction, the whooping crane was nearly driven to extinction by the midpoint of the 20th century. Conservationists have expended enormous efforts to reintroduce this species in the wild, but it is still considered to be endangered.

Where to Find the Whooping Crane

Before numbers declined, the whooping crane was once found all over the marshes, wetlands, mudflats, and wet prairies of the United States and Canada.

The whooping crane nests on the ground or on slightly raised platforms. The nest consists of a flat mound of vegetation surrounded by water.

The scientific name of the whooping crane is Grus americana. The genus name Grus comes to us from a Latin word which means “to cry hoarsely”; it was also the Latin name for the crane. Americana, as you can probably guess, refers to its geographical range. This species belongs to the family of Gruidae, along with all other species of crane.

Like all members of its family, the whooping crane is an exceptionally large waterbird with a long neck and long legs. The main physical feature that distinguishes this from other cranes is the large red featherless patch on the head. The rest of the body is almost completely white except for the black tips on the outer wings. They also have yellow eyes and a dark bill. Standing around 5 feet tall with a wingspan of up to 7.5 feet, the whooping crane also holds the title of the tallest bird in North America. But because of their hollow bones, they only weigh about 15 pounds.

The social structure of the whooping crane is based around intimate lifelong pairs and small family units. The whooping crane makes several types of loud, bugle-like sound and deep trills to signal danger, attract mates, and communicate its emotional state. New pairs tend to live closely to the territory of their parents.

Whooping cranes complete a long migration up to 2,500 miles for the winter, sometimes stopping over at wetlands and fields along the way. Once they arrive at the wintering grounds, the cranes prefer coastal marshes and bays with slightly salty water. These birds once filled the skies in large numbers. But by the 20th century, only a single population of whooping cranes remained. This population spent the breeding season in the Wood Buffalo National Park of Canada and then migrated to Texas for the winter. This population is stable, but it’s also vulnerable to being wiped out by diseases or other unexpected events.

In an effort to rehabilitate numbers, conservationists attempted to introduce new populations to various parts of the United States. Only one population in Kissimmee, Florida took hold. However, because young whooping cranes learn the migration route from their parents, this population had no knowledge of how to migrate. The solution was to use an ultra-light aircraft as a means to teach the young cranes the proper route. Now certain members of the group are able to migrate all the way to Wisconsin.

The whooping crane is an omnivorous bird that searches for food on both land and in the water. Its big bill is used to seize prey.

What does the whooping crane eat?

The whooping crane has a very diverse diet that consists of reptiles, amphibians, insects, small fish, and even some grains, acorns, and marsh plants.

Despite its size, the whooping crane does fall prey to some ferocious predators. But the main threats to this bird’s existence are habitat loss and illegal shooting.

What eats the whooping crane?

These birds are preyed upon by foxes, coyotes, eagles, wolves, wolverines, and black bears. An adult bird has some natural advantages against predators, including its ability to fly, but the young cranes are completely defenseless and must rely on the protection of the parents.

These birds start forming monogamous lifelong relationships at around two or three years of age. In order to attract a mate and also to strengthen the bond with an existing partner, this bird engages in an elaborate courtship display. This involves its customary whooping call and a dance in which it flaps its wings, shakes its head, jumps up and down, and tosses about feathers and grass. These behaviors are sometimes done in unison with the partner. It only tends to seek out a new mate if the current one dies.

After mating, the female lays up to three large eggs around late spring. Over the ensuing month, the parents take turns incubating the eggs, while the other parent stands guard against predators. The young birds are completely reliant on the parents for food. The providing parent, which is more often than not the female, grasps the food in its bill and allows the chicks to peck at it. The food starts out as worms and insects and then gradually becomes bigger from there.

Although the mother produces two or three eggs, no more than one bird usually survives beyond the first few months of life. This surviving offspring learns valuable survival skills and migratory routes from its parents until it achieves full independence the following spring. The chick’s brown feathers finally develop into the all-white plumage by around the age of two. The average lifespan of the whooping crane is about 22 to 30 years in the wild, but they have been known to live up to 40 years in human care.

According to the IUCN Red List, the this crane is an endangered species. There are only about 50 to 250 mature individuals left in the wild, but the numbers appear to be increasing slightly. Before the 19th century, there were about 15,000 to 20,000 of these cranes in North America. But as hunting and habitat loss took their toll, numbers fell as low as 15 by 1941. At the time, it seemed like this species was destined for extinction, but the quick work of conservationists saved it. Captive breeding programs were established and the remaining population was shielded from harm. This species is now under the protection of the US Migratory Bird Act, though illegal hunting is still known to occur.

Does the whooping crane migrate?

Yes, the whooping crane migrates from the north to the south for the winter.

How many eggs does the whooping crane lay?

The whooping crane lays up to three eggs per year, but only one chick usually survives the juvenile phase.

How fast does the whooping crane fly?

What is the wingspan of the whooping crane?

The whooping crane has a wingspan of around 7.5 feet.

When do whooping cranes leave the nest?

Whooping cranes grow their full flight feathers after about 80 to 100 days, but they don’t fully gain independence until about nine months of age.

Why are whooping cranes endangered?

Whooping cranes were endangered by a combination of habitat loss and hunting. The United States has lost much of its wetlands over the centuries to development and farming. This had a destabilizing effect on whooping crane populations.

How many whooping cranes are left?

There are no more than 250 mature individuals left in the wild.

Where does a whooping crane live?

The natural habitats of the whooping crane include the marshes, wetlands, mudflats, and wet prairies of the United States and Canada.

What is a group of whooping cranes called?

A group of whooping cranes is called a cohort or a dance.

How tall is a whooping crane?

The whooping crane stands about 5 feet tall, almost as much as an average human adult.