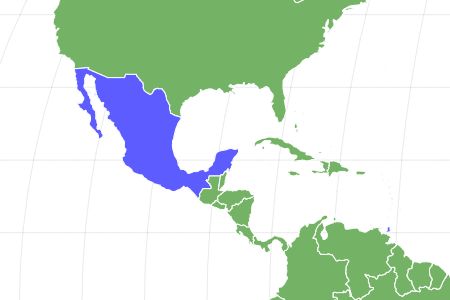 View all of our Chicken Snake pictures in the gallery.

View all of the Chicken Snake images!

“One of the Longest Snakes in the Americas”

This pretty snake has been known to grow to over 8 feet long, and some people claim that there have been specimens that have grown to 14 feet. If this is true, the chicken snake is one of the largest snakes on earth and not just in the Americas! However big it gets, the chicken snake is not poisonous and helps humans by preying on rats and mice.

1. Some chicken snakes puff up their necks when they’re threatened. This makes them resemble a cobra. If that doesn’t work, they will bite.

2. Even though they’re large snakes, grown chickens are a bit too much for them to handle. They’ve been known to take baby chicks, however.

3. The yellow rat snake is not poisonous, but some claim it can be aggressive, especially when young. There are stories of snakes chasing people who annoy them.

4. In some areas of Mexico the snake is called “Volador,” or “the flyer.” This reflects how quickly and smoothly it slides through the tree limbs.

Where To Find Chicken Snakes

Spilotes pullatus’ preferred habitat are the forests of southern Mexico, most of Central America, Trinidad and Tobago and the northern and central parts of South America. They move easily in trees but can also move well on land. They’re usually found near a body of water.

The scientific name for the chicken snake is Spilotes pullatus. Spilotes comes from spilos, a Greek work that means “spotted or stained.” The epithet pullatus is from the Latin and means “wearing dark garments.” There are five subspecies:

It’s possible that these subspecies can mate and produce hybrids.

The Different Types of Chicken Snake

Though information on the different subspecies of S. pullatus is sparse, they seem to be able to be told apart by the patterns and colors of their scales. Some have more orange, black or white in proportion to the yellow that gives the snake one of its names.

How To Identify Chicken Snakes: Appearance and Description

This attractive snake is long, sometimes very long and slender, with a head that is distinct from its neck. It is most often black and yellow, and the yellow markings can form crossbands, nets or diagonals depending on where the snake lives. There are 16 to 14 rows of dorsal scales in the middle of the body, 198 to 232 scales on the belly and 90 to 120 divided scales on the underside of the tail. Like many colubrids, it has large eyes and round pupils.

There are many snakes called rat snakes, and the chicken snake is itself a type of rat snake. Two of its many names are the tiger rat snake and the yellow rat snake. However, it differs from other rat snakes in several ways.

Another rat snake is the gray rat snake, Pantherophis spilodes, which is found east of the Mississippi and as far north as southwest Wisconsin. This sake, as its name suggests, is gray wth darker gray markings. It grows about as long as the Texas rat snake but at least one of these snakes has grown to nearly 9 feet in size. The eastern fox snake, a rat snake that gets its name because it has a foxy smell, is also smaller than the chicken snake and has a light golden brown ground decorated with darker brown spots. It too is found east of the Mississippi River.

Some of these rat snakes mate and produce hybrids. The eastern rat snake’s range overlaps with the range of the gray rat snake. Both belong to the Pantherophis genus, and they have no trouble mating and producing hybrids of both species.

Chicken Snake Venom: How Dangerous Are They?

Chicken snakes are not venomous or poisonous. They may bite if cornered, but their bite isn’t dangerous to humans and should be cleaned and dressed like any other wound.

Chicken snakes are solitary and territorial, but they will try to escape if they sense a threat. If they are in a tree, they will go to the ground and try to disappear. Their most notable threat display is the inflation of their neck, which makes them look like a cobra and makes them look bigger than they are. They also rattle their tails to mimic the venomous rattlesnake. If these displays don’t deter a would-be predator, the snake may strike.

The snake’s breeding season starts in spring and involves a courtship ritual with the male following the female until she approves with what is actually a nod of her head. If another male tries to interfere, the two males engage in ritual combat where they entwine and try to push each other’s head down. After mating, the female lays 12 to 18 eggs in a secluded place. Baby snakes emerge after 73 to 76 days. Neither parent cares for them, but the hatchlings are able to fend for themselves unless they fall prey to other animals, including other snakes. A baby chicken snake is between 8 and 12 inches long when it hatches.

If food is abundant, the female may lay two clutches of eggs, one in early spring and the other in late summer.

The chicken snake is harmless to humans and is beneficial in that it eats vermin.

Chicken snakes are not venomous.

How do chicken snakes hunt?

Chicken snakes are diurnal, which means they hunt during the day. They use their sense of sight, their senses of taste and smell, and vibrations as they slither over the ground or tree limbs to track prey. When prey is within reach they grab it in their mouth, wrap their coils around it and constrict it to death. Sometimes they just hold the prey in their coils and crush it to the death against a hard surface. As with all snakes, chicken snakes swallow their prey whole. They may need to unhinge their jaws if the prey is larger than their head.

Some people believe that chicken snakes are aggressive while others believe that they’re shy and only strike if they see no way to remove themselves from a threat.

Where do chicken snakes live?

Chicken snakes of the Spilotes pullatus species live in Mexico, Central and South America and Trinidad and Tobago. They prefer forest habitats near bodies of water but are also found on farms where their favorite prey of rodents may be plentiful.

What do chicken snakes eat?

What is a chicken snake?

A chicken snake is a large-sized, slender, nonvenomous snake found in the neotropics.

How do you identify a chicken snake?

They can be identified by the vivid black and yellow or sometimes black, yellow and orange pattern of their scales. They are often very long snakes and quite narrow. Chicken snakes are semi-arboreal and can often be found in trees.

It is a slender snake between 4 and 8 feet long, though some have been known to be even bigger in size than this. It has a black ground color with yellow spots and crossbands, with black sutures between the scales. The belly is yellow and also has black crossbands though they are irregularly shaped.

Where do you find chicken snakes?

Chicken snakes are found in the neotropics beginning in southern Mexico and down into central South America. They can be found both on the ground and in the trees in their forest habitats.

Chicken snakes may be challenging to find, but if they are given the proper care, they can make good pets.

What's the real name of a chicken snake?

The proper, scientific name of the chicken snake is Spilotes pullatus.

What do chicken snakes do?

Chicken snakes do what other snakes do. They hunt prey, avoid predators and make sure, as cold-blooded animals, that they are neither too hot nor too cold. Now and then, they reproduce.

What are the key differences between coachwhip snakes and chicken snakes?