Click through all of our Star-nosed mole images in the gallery. 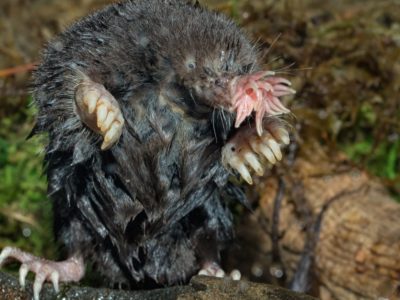 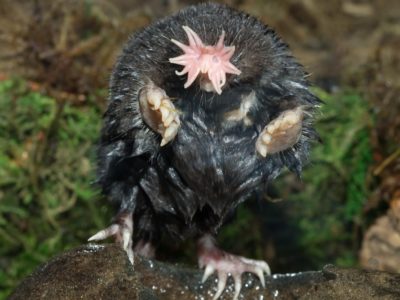 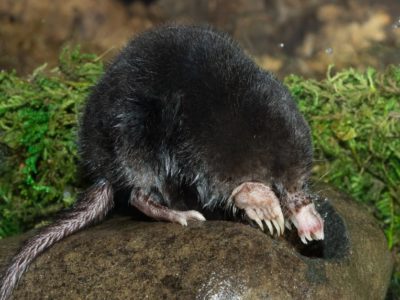 View all of the Star-nosed mole images!

The star-nosed mole has one of the most unique sensory organs in the entire animal kingdom.

Despite being almost completely blind, this animal is far from helpless. The writhing tentacles on its face have evolved into exquisitely acute and sensitive organs that enable it to understand the nature of the objects in the world around it. In fact, studies of the star-nosed mole are actually helping scientists learn more about our own nervous system. The star-nosed mole is sometimes called an optimal forager. This means it has evolved the ability to identify and consume food very efficiently in order to survive in a highly competitive environment.

The scientific name of the star-nosed mole is Condylura cristata. This derives from a Latin word that means a tuft or crest on the head. This species is the only living member of its genus, but there are two recognized subspecies, C. cristata cristata in the north of its range and C. cristata parva in the south.

In almost all characteristics besides the tentacles, the star-nosed mole actually looks like a typical member of the mole family. It has a big, stout body, a sinewy tail, and massive forelimbs that are highly adapted for digging. The short but dense coat of fur is black and dark brown on the back and fades to lighter brown on the underside. Measuring about the same size as a rat, this species stretches an average of 6 to 8 inches and weighs only 1 or 2 ounces. Besides the presence of sex organs, males and females are very similar in appearance.

The star-shaped organ is by far the most conspicuous characteristic of this species. It is composed of 22 writhing tentacles (or rays) arranged around a central apparatus. Since there’s almost nothing else like it, even among the most closely related living mole species, this organ has been the subject of close and intense scrutiny. Each of the tentacles is covered by an astonishing 25,000 sensory receptors known as Eimer’s organs, which are supplied by some 100,000 nerve fibers (the entire human hand only has 17,000). A vast amount of the mole’s brain is devoted to the task of interpreting the signals from these organs.

The star-nosed organ is among the most unique instruments in the entire animal kingdom. Since they contain no muscles or bones, the tentacles do not have the ability to grip or manipulate objects or prey. Instead, they function exclusively as finely tuned sensory instruments. In constant writhing motion, the tentacles can touch up to 10 or 12 objects per second as a means to sense the world around them.

It’s believed that the sensory receptors on the nose have three distinct purposes: they can sense the microscopic textures of objects, the electrical fields surrounding objects, and even ground vibrations in the soil. It hasn’t been definitely proven that the mole can sense electrical fields, but this ability is strongly inferred from the results of studies in which the mole is drawn to batteries or other strong electrical fields in the water. Since the sense of touch is so highly developed, the mole’s sense of sight has atrophied. It’s believed that the visible eyes can see nothing besides basic lightness and darkness. Both the mole’s sense of hearing and smell is far more developed than its sense of sight.

The star-shaped organ is a useful adaptation for an animal that spends most of its life moving around in cramped underground areas. The tentacles are constantly feeling and touching the soil around them. The shallow surface tunnel they create extends well over a hundred feet along the edge of the water with an underwater exit on one end. While it’s digging, the loose dirt from the tunnel is pushed back up to the surface, forming a large molehill. It also builds a spherical nest within the tunnel system, usually beneath a log or other protective object, which it then lines with dry leaves or grass.

While it’s obviously most adept at traversing through underground tunnels, the star-nosed mole is also an excellent swimmer. It moves through the water by alternating strokes of its front and rear limbs, which creates a distinctive zigzag motion of its body.

Whereas most mole species lead a solitary existence, scientists believe that the star-nosed moles form loosely organized colonies of related individuals. Very little is actually known about these colonies. A typical male/female mating pair seems to be the default arrangement in the breeding season, but it’s not known whether these moles share tunnels together outside of the breeding season.

The star-nosed mole takes up residence in the wet lowland areas of North America. Its native habitat stretches from Quebec in the north to Georgia in the south and also as far west as the Dakotas. It has been found at elevations up to 5,500 feet in the Appalachian Mountains.

The star-nosed mole faces the constant threat of natural predators in the wild. This species isn’t usually disturbed or harassed by humans, because its habitat does not generally overlap with where people live. The biggest human threat to this species is probably the persistent loss of wetland habitats, which have fallen by half since the 1600s. It is not known how much this has affected population numbers though.

What eats the star-nosed mole?

The star-nosed mole is preyed upon by foxes, weasels, minks, domesticated cats and dogs, skunks, owls, and hawks. As it spends more time above ground and underwater than other moles, this species might be more vulnerable to predators.

What does the star-nosed mole eat?

The star-nosed mole spends most of its day foraging and eating. About half of its diet consists of worms; the other half consists of mollusks, small fish, damselflies, dragonflies, and other insects. It prefers to hunt in underground burrows or in the water and only rarely comes up to the ground level for food.

Very little is actually known about this animal’s reproductive habitats, including how it acquires a mate or deals with reproductive rivals. From the little information gathered, we know that star-nosed moles pair up with a mate at some point in the autumn, and these pairs appear to stay together until the mating season finally occurs in March and April. If the female fails to produce a litter the first time, then she may try again later, perhaps as late as July. As they prepare to reproduce, the star-nosed moles undergo small physical transformations. The male’s testes swell up to reach almost 9% of the total body size.

After a pregnancy period lasting about 45 days, the mother will produce anywhere between two and seven pups at a time. Born small and helpless, each baby is almost completely hairless, the eyes and ears are closed, and the tentacles are folded back along the nose. Over the ensuing months, each baby is expected to develop quickly. By the two-week mark, their eyes, ears, and star-shaped nose start to become functional. By the month mark, they are fully independent of the mother. And by the 10-month mark, they are sexually mature and ready to begin mating.

It’s believed that the parents devote only limited time and effort to the pups’ care. Once the baby is weaned from the mother’s milk, it is expected to survive on its own. The average lifespan is not well-studied, but if they do manage to live beyond the juvenile phase, then it’s speculated the star-nosed mole can live around three to four years in the wild.

While exact population numbers are not known, the star-nosed mole is currently classified as a species of least concern by the IUCN Red List. This means population numbers appear to be robust and require no special conservation status. The loss of wetlands is a concern, but it has not yet put the species in peril. The numbers are estimated to be stable.

View all 110 animals that start with S

They are completely carnivorous, eating only meat.

What does the star-nosed mole eat?

Where do star-nosed moles live?

The star-nosed mole can be found almost anywhere in the northeastern United States and the eastern part of Canada with nearby marshes or wetlands.

What is one of the most interesting facts about the star-nosed mole?

Each tentacle on the nose has approximately 25,000 small sensory receptors. Since this species has very limited vision, the tentacles are the mains means by which it senses the surrounding environment. The mole can sense textures, vibrations, and perhaps even electrical fields.

Why are star-nosed moles dangerous?

Star-nosed moles are not dangerous to humans, but they can cause damage to some landscapes or gardens. This species tends to live out in remote marshes and wetlands, but if they do happen to tunnel into a nearby yard, then they can become a real nuisance. 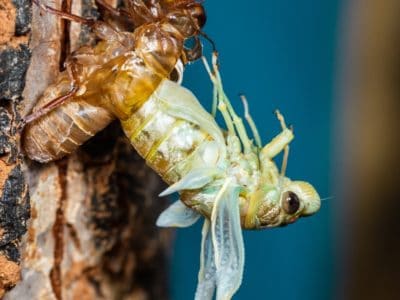 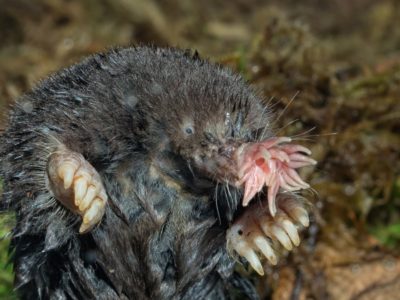 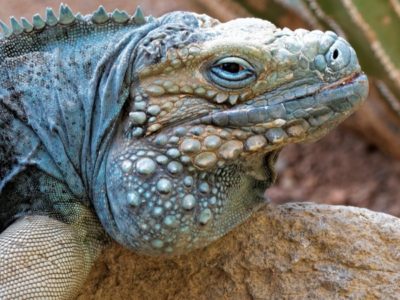 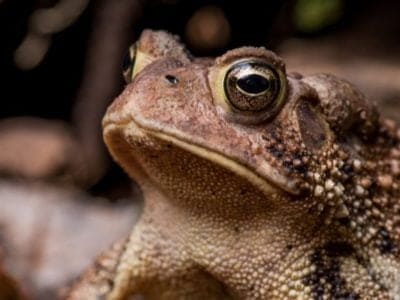 They secrete a milky poisonous liquid that can make many animals sick. 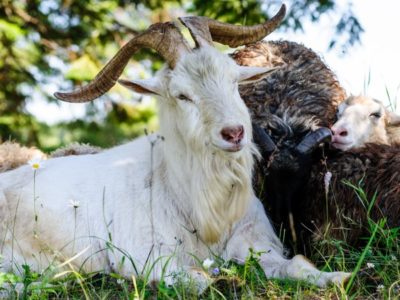