Click through all of our Black Wasp images in the gallery. 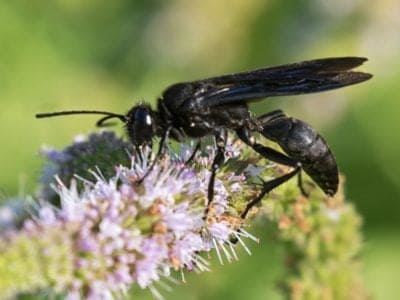 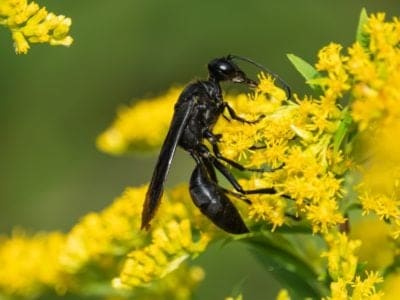 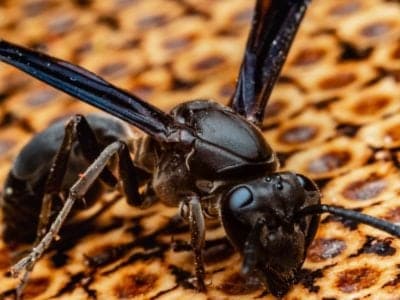 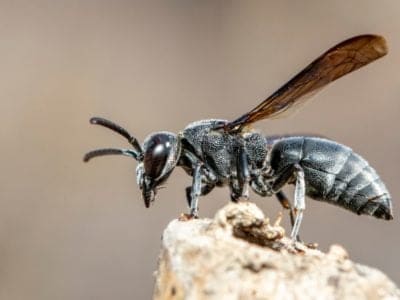 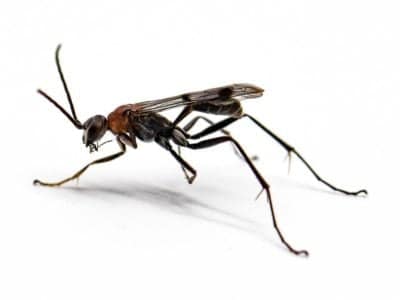 View all of the Black Wasp images!

The black wasp, which is often referred to as the Great Black Wasp, is rather small, and it is grouped with other insects under the digger wasp species.

Here are a few interesting facts about the black wasps:

These insects are known by the scientific name Sphex pensylvanicus. They belong to the species of digger wasp and are known to be found across North America. The females of the species are bigger than the males of the species.
The word “sphex” is very direct, and it is the literal word for “wasp” in Ancient Greece. The word “pensylvanicus” is a variation of Pennsylvania, which is an eastern state in the United States. Most often, this word is used to describe a species that is native to Pennsylvania, so it may be included in the name because there are 65 different species of great black wasps in the state.

Appearance: How to Identify Black Wasps

As the name suggests, the great black wasp is black. Unlike other wasps, these wasps do not have any markings or stripes on their bodies, which makes them relatively easy to identify. These insects have a traditional body for a wasp with large wings and a narrowed midsection in their small body. Their entire abdomen is a deep black hue.

The female black wasp is easily the more unique of the species, showing an incredible size advantage over the male. The species often measures between 1 and 1.3 inches, though the female great wasp protects itself with a powerful and threatening stinger.

These wasps appear to have a semi-gloss black appearance, made only more stark by the way that the wings can fold flat onto their body. Their spiny legs can make the insect seem even more intimidating.

These insects are relatively solitary, grouped with other wasps that hunt and sting.

Diet: What Do Black Wasps Eat?

The great black wasps are subterranean insects, allowing them to make a home beneath the surface of their climate. This area is the best place for them to build a nest and care for their young.

These insects are natural hunters, which is why they will go after grasshoppers, cicadas, locusts, katydids, and other fleshy insects. In some cases, these wasps will also consume their own young before they are ready to fend for themselves.

Prevention: How to Get Rid of Black Wasps

As much as co-living in the environment is important, these insects could be a nuisance that is threatening to your ability to safely be at home. Leaving them to thrive in the home can cause irritation or discomfort, much like the other insects that might surround you.

For the most humane way to deter these bugs or a nest, a non-insecticide spray may be the best way to get rid of them. This spray stops the insect from being able to fly. There are also non-toxic mint sprays that can be used in the home and garden, protecting plants from damage as well. In some cases, it is possible to use a cleaning spray to saturate the wasps.

If getting rid of it alive is not an option for you, you could hit them with a heavy object. This would most likely kill the wasp. It is important to note that flyswatters do not usually work with the great black wasps.

If you are not scared of the insect, you could pick it up with the help of gloves and can push it into a fly swatter, and then take it outside your home. Interestingly, it could be difficult to determine if the wasp is dead as they can only be stunned and can still be motionless.

While the sting of the great black wasp can be painful, these insects are not considered to be fatally dangerous to humans (unless the individual has an allergy).

What happens if you get stung by a black wasp?

Expect to have some allergies, redness, or swelling if you are stung by a black wasp.

Where do black wasps live?

They are found all across North America. They prefer hotter climates, leading them to both coasts.

No, the great black wasps are known to be solitary insects, but they will defend themselves or their nest if necessary.

How many legs does a black wasp have?

How do you identify black wasps?

Black wasps are black and do not have any markings or stripes on their bodies. They have standard wasp bodies. Their wings are large, and their midsection is thin and tiny. They also have a large back end.

How do you get rid of black wasps?

You can use a non-insecticide, non-toxic mint spray or you can kill them with a heavy object to get rid of them.