The baya constructs a massive nest out of plant fibers 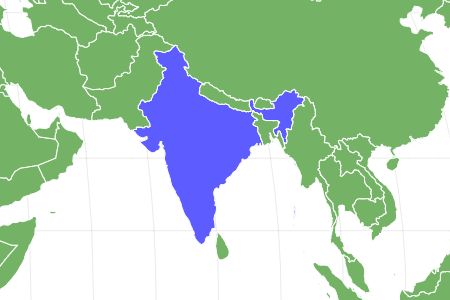 View all of our Baya pictures in the gallery.

View all of the Baya images!

The humble baya has the ability to construct some of the most elaborate nests in the entire animal kingdom.

The baya, also known as the baya weaver, is a small songbird that takes up residence in huge nests it has constructed for the breeding season. Their homes are composed of an entrance and chamber in which they can raise a successful brood. The name of the baya comes from the local Hindi name for the species. It is just one of many different types of weaver birds.

Where to Find the Baya

The baya weaver is found in grasslands, scrubs, agricultural fields, and secondary growth forests throughout South Asia and parts of the Pacific region. They are particularly prolific across the entire subcontinent of India.

Baya weavers construct highly elaborate nests from grass stems and other plant fibers. Unlike many other types of birds, these nests are constructed solely by the male. They resemble a large upside down flask or gourd with a large central chamber and a long vertical tube that leads out to a side entrance. Nests are built on thorny acacia or palm trees overhanging the water for protection.

The scientific name of the baya weaver is Ploceus philippinus. The genus name Ploceus means weaver. It is derived from the Greek pleko, meaning “to entwine.” The species name Philippinus is derived from the Philippines, even though it this is actually a huge misnomer. The original scientific discoverer mistakenly believed that his specimens had come from the Philippines, but it isn’t actually found in the country at all. The baya belongs to the weaver genus, which includes some 57 closely related species. Five distinct subspecies of the baya are recognized by taxonomists.

The baya is a small songbird, measuring about 6 inches long and a 10 inch wingspan, with a stout bill and a square tail. Non-breeding males and females have a cream-colored body with brown or black streaks on the wings. A yellowish hue is also mixed in throughout the entire plumage. When the breeding season arrives, the males start to grow bright yellow breast and crown feathers with a dark brown facial mask. Juveniles look similar to females, but they lack the same thick eyebrows. Regional variations also exist in the precise arrangement of colors throughout the plumage.

The baya weaver is among the most “gregarious” (meaning social) birds in the world. They form large colonies of about 20 to 30 birds in which they construct their nests for the breeding season. These flocks forage for food together and fly in formation when the need arises. They also spend a lot of time throughout the day dust bathing and preening. Their calls can be generally divided into mating songs, alarm calls, chick cries, and other communication calls.

The baya makes seasonal movements every year in response to rain and the availability of food, but they tend not to travel very far from their initial home.

The baya is an omnivorous bird that likes to forage on trees and the ground in large groups.

What does the baya eat?

The diet of the baya weaver consists almost entirely of seeds and grains. The large beak is well-adapted for cracking open the thick shells with incredible ease. Because they often raid rice fields, the bayas are sometimes viewed as a pest by humans. They will also sometimes supplement their diet with insects, frogs, and other small animals.

According to the IUCN Redlist, the baya is considered to be a species of least concern. They do face some challenges from habitat loss, but overall this species is very common and widespread through South Asia, and they have adapted well from the transformation of their habitat into farmland.

What eats the baya?

The baya is preyed upon by numerous types of snakes, lizards, crows, and birds of prey. The eggs and chicks are particularly vulnerable to predation, but the location of the nest, suspended from a thorny tree above a source of water, usually provides a degree of protection against most predators.

When the breeding season arrives between April and August with the coming monsoons, males in the flock gather together and make a series of alternating chatters and whistles to attract a potential mate. At the same time they hang upside down while fluttering their wings. Males will start to construct the nest early in the breeding season, but it will remain uncompleted until the male succeeds in attracting its first partner.

After mating, the female lays two to four white eggs per clutch. Together the parents incubate the eggs for 14 to 17 days before they hatch. The chicks rely on the mother and sometimes even the father to feed them. It takes about 17 days before they leave the nest for the first time. They gain their full adult plumage after four to six months, but it can take at least a year before the chicks reach full sexual maturity.

Both males and females are polygamous. This means that they will continue to mate with other partners even after raising their first successful brood to completion. Females are also known to lay their eggs in the nest of other baya weavers to take advantage of their parental instincts. The typical lifespan is not well-known, but many weavers can live at least 10 to 15 years old.

The global population of the baya has never been properly estimated, but the IUCN Red List considers the population to be stable and unchanging.

Does the baya migrate?

The baya makes short seasonal migrations every year before and after the rainy season.

How many eggs does the baya lay?

The female lays two to four eggs per clutch.

How fast does the baya fly?

The flight speed of the baya has never been measured with any accuracy.

What is the baya’s wingspan?

The baya has a wingspan of approximately 10 inches long.

When do bayas leave the nest?

The chicks usually leave the nest by 17 days old, but it will take several more months to gain the full adult plumage.

What is a baya bird?

The baya is a small songbird with bright yellow plumage. It is a member of the weaver genus.

Is a baya bird a weaver bird?

Yes, the baya is a type of weaver. It is so-named for the ability to weave a complex nest.

What does a baya bird eat?

The diet of the baya mostly consists of seeds and grains. It consumes insects and other animals in smaller quantities as well.

Does the baya bird die when its mate dies?

That is actually a myth. The baya does not perish when its mate dies. This bird isn’t even monogamous. It will have multiple mates per breeding season and does not become attached to any single one.