The biggest snail species on land!

Click through all of our Giant African Land Snail images in the gallery. 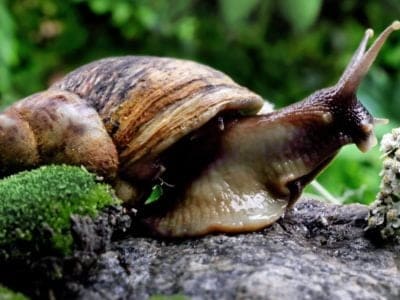 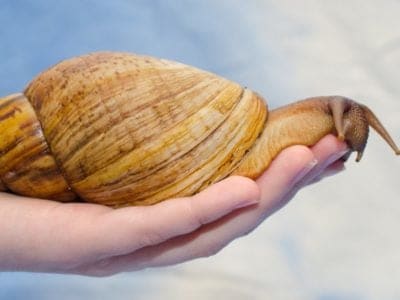 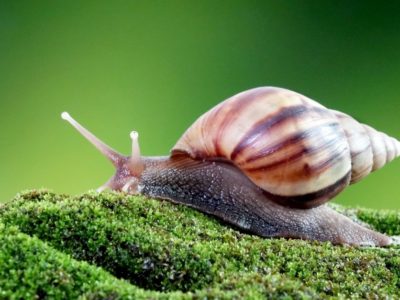 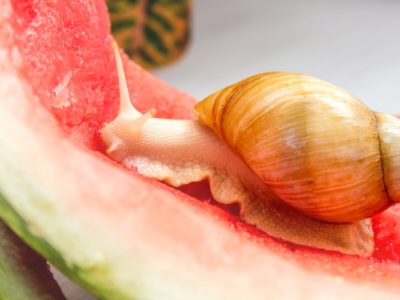 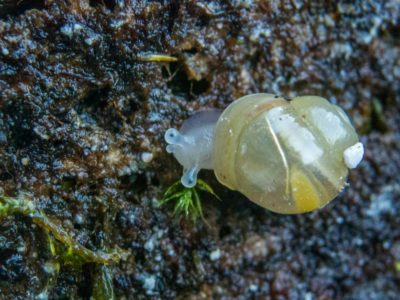 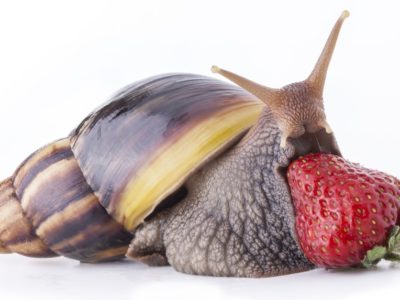 View all of the Giant African Land Snail images!

As its name suggests, the Giant African Land Snail is one of the largest snails in the world. Though it is native to East Africa, it has been introduced in many other places. In many of these places, it has, unfortunately, become something of a pest. Though the Giant African Land Snail evolved in tropical climes, it has learned to thrive in more temperate areas and may even hibernate, or estivate during the colder or drier months.

Though there are a few animals called the Giant African Snail, this article deals with the species Achatina fulica. The snail belongs to the Achatinidae family and the genus Achatina. It used to be known as Achatina (Lissachatina) fulica, Achatina hamillei ; Helix (Cochlitoma) fulica; Helix fulica, or Lissachatina fulica. The species name is derived from the Greek word for “agate,” and may describe the attractive pattern on the animal’s shell. Fulica is Latin for a type of water fowl.

The first thing a person notices about a fully grown Giant African Land Snail is its size. The animal is almost 3 inches high, can grow to nearly 8 inches long, and can easily fill the palm of a grown man’s hand. It weighs a little over an ounce.

In Achina fulica, the shell is higher than it is wide and the whorls turn either clockwise or counter-clockwise depending on the individual, though most snails have clockwise turning shells. By the time the snail is grown, the shell can have between seven and nine whorls, or spirals. Most shells are shades of brown with attractive stripes and streaks. The color depends largely on the animal’s diet and environment. The shell of the Giant African Land Snail is famously tough and rich in heavy metals. Like all land snails, A. fulica’s muscular “foot” allows it to move. Its head has two pairs of fleshy tentacles.

The Giant African Land Snail is solitary and only seeks out other snails when it’s time to breed. Like most other land snails, it lays down a trail of slime as it moves to protect it as it travels over rough terrain. The snail is active at night and sleeps during the day after it buries itself in soil. Like all snails that have shells, the shell is used for protection. The brownish shades of A. fulica‘s shell help camouflage it as well.

If a group of these snails get together, they are called a walk, a trail, an escargatoire or a rout.

During the night, the snail leaves its shelter and seeks food. It doesn’t hear as humans do, but it has other senses to teach it about its environment. Its eyes are found on the upper pair of its tentacles and the lower pair possess olfactory organs. The snail relies mainly on these two senses to help it navigate the world.

This giant snail originated in what are now the countries of Tanzania, Mozambique, Somalia, and Kenya and is currently found in much of the world including Asia, the Caribbean, and North and South America. Habitats where A. fulica flourishes include the coast, the forests, around rivers, shrublands and wetlands, and even cities. Since the snail doesn’t migrate, this means it was introduced into these other areas, either accidentally or deliberately. Some people collected them as pets and the snail escaped, sometimes they were brought over on cargo ships or hitched a ride on vehicles, sometimes they were introduced as a food source. Because one gravid snail can lay hundreds of eggs at a time, it is easy for the snail population to explode in countries where the snail is not native.

The snail is an herbivore and will eat an amazing variety of plant-based materials. Biologists have counted at least 500 types of plants that the snail will eat. It does not care if it is living or dead and will even eat paper. To fortify its shell, it will eat sources of calcium such as pebbles, sand, and bones. The snail has even been seen to eat concrete. It will eat the dead bodies of small animals. When food is really scarce, Giant African Land Snails will eat their own eggs or resort to cannibalism.

The diet of the snail changes as it ages. Young snails are partial to algae and plants and flowers that are soft or even rotting, though a snail caretaker should not feed a snail decaying food as it may still sicken them. Older snails prefer fresh, living vegetation, including fruits and vegetables such as cucumbers, bananas, and lettuce. The snail is able to eat such a varied diet because it has a radula, which resembles a long tongue full of serrated teeth. This organ grates the animal’s food and makes it easier to digest.

Despite the fact that the Giant African Land Snail has become invasive in some parts, it has a great many predators. These include rats, foxes, wild boars, hermit crabs, and other snails such as the cannibal snail. Fire ants and flatworms also attack and devour A. fulica, especially when it’s young. Despite this, the snail is not endangered.

One of the most fascinating things about the Giant African Land Snail is that it is a hermaphrodite, which means it has both male and female reproductive organs. Since the snail can’t fertilize itself, it must seek a mate.

A. fulica is particular when it comes to a mate, and they choose them according to their age and their size. If they are the same size, chances are higher that both snails will become gravid. If one is larger, the larger snail acts as the female.

The snails begin by tenderly courting, then exchanging sperm, which can be stored in the snail’s body for as long as two years. Mating has been known to last as long as two hours and happens at night. The snail lays its eggs between eight and 20 days later in nests or, in the soil or among rocks. A snail who is laying eggs for the first time will probably lay only 100 or so, and about 90 percent of them will hatch about two weeks later if the temperature goes above 59 degrees Fahrenheit. The baby snails or hatchlings are miniatures of their parents and do not undergo metamorphosis like sea snails. Neither parent provides care.

A. fulica is sexually mature when it is six months old and has a lifespan of about three to five years though some have lived as long as 10 years. Whether the animal is in captivity or in the wild does not seem to make much difference in its lifespan. Though predators keep the numbers of these snails in check in their native areas, introduced snails die of old age or because the climate is inhospitable even for them.

Given how quickly A. fulica reaches reproductive age, its fecundity, and its ability to quickly adapt to different habitats, there are probably millions of them worldwide. In Africa alone, they are found in 14 countries and are considered invasive in eight of them, including Ghana, Madagascar, Nigeria, and the Seychelles.

In the United States, the snail is found in Florida, Hawaii, and Wisconsin and is invasive in Florida and Hawaii. A. fulica was first found in Florida in 1969 was eradicated but returned in 2011 and is now under eradication again.

A. fulica is also invasive in many areas of Oceania, including American Samoa, French Polynesia, Palau, Papua New Guinea, and Samoa. It was eradicated in Tuvalu.

The snail is also invasive in much of South America, including Argentina, Brazil, Colombia, Ecuador, Paraguay, Peru, and Venezuela.

The snail has been introduced as early as before 1800 in Madagascar and as recently as 2013 in the Netherlands Antilles.

As ubiquitous as the snail is, it is still exhibited in zoos. They include:

View all 71 animals that start with G

Technically, the Giant African Land Snail is an herbivore as it eats all manner of vegetation, but since it will eat bones and even cement to get calcium for its shell, it can also be thought of as an omnivore.

What Kingdom do Giant African Land Snails belong to?

What phylum do Giant African Land Snails belong to?

What class do Giant African Land Snails belong to?

What family do Giant African Land Snails belong to?

What order do Giant African Land Snails belong to?

What genus do Giant African Land Snails belong to?

What type of covering do Giant African Land Snails have?

In what type of habitat do Giant African Land Snails live?

What is the main prey for Giant African Land Snails?

What are some predators of Giant African Land Snails?

How many babies do Giant African Land Snails have?

The average number of babies a Giant African Land Snail has is 200.

What is an interesting fact about Giant African Land Snails?

The Giant African Land Snail is the biggest snail species on land!

What is the scientific name for the Giant African Land Snail?

The scientific name for the Giant African Land Snail is Achatina fulica.

What is the lifespan of a Giant African Land Snail?

Giant African Land Snails can live for 3 to 10 years.

How fast is a Giant African Land Snail?

A Giant African Land Snail can travel at speeds of up to 0.002 miles per hour.

Those who have Giant African Land Snails as pets do find them interesting and easy to care for, though in many places it is illegal to keep one of these snails as a pet. They are extraordinarily fecund, and if they get out and find another escaped Giant African Land Snail, the population can get out of hand very quickly. The snail eats an amazing amount of vegetation from garden flowers to crops and, worse, is a disease vector. Diseases that can be spread by the Giant African Land Snail include meningoencephalitis and schistosomiasis.

How big do Giant African Land Snails get?

Giant African snails can grow up to 8 inches long but some individuals can grow larger.

Giant African snails, like other snails, can’t really bite people because their jaws lack the requisite force. They may mistake a person’s finger for something edible and flick at it with their tongue. The sensation may feel like having a tiny toothbrush passed over the skin.

If these snails escape captivity they can become very invasive indeed.

In many places, it is illegal to own Giant African Snails because they can become invasive and spread diseases to plants, animals, and humans. 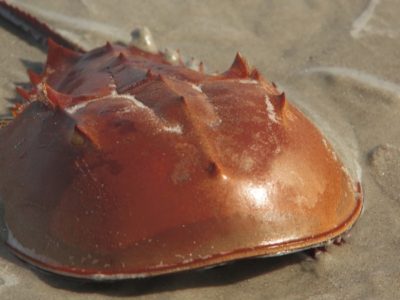