The marabou stork does not have a voice box. 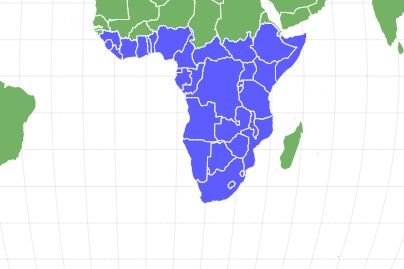 View all of our Marabou Stork pictures in the gallery.

View all of the Marabou Stork images!

“The Marabou Stork is the Largest Stork”

Called the undertaker bird because from the back it looks like an elderly, black-suited undertaker going about his work, the marabou stork is a wading bird found in much of Africa. Though it can be bad-tempered if a human gets too close, this unsightly stork loves to be around people, for their trash makes up a good part of its diet. Indeed, it has become so common on the streets of Nairobi, Kenya that it has replaced the feral dog in the city’s ecosystem.

It seems that marabou storks will eat anything, and their population is growing. But the birds make up for their messiness and ugliness by giving humans their cloud-soft feathers, which were used to make boas and trim clothing and by removing waste from the environment.

Where To Find Marabou Stork

The nest of the marabou stork is built of sticks in the treetops, cliffs, or even buildings and is small in proportion to the size of the adult bird. It is flat and has a cup in the center made of smaller sticks and leaves.

The marabou stork’s scientific name, Leptoptilos crumenifer, comes from the Greek lepto, which means “slender” and ptilo, which is Greek for soft feathers or down. Crumenifer is Latin for a money bag carried around the neck, which references the bird’s prominent gular sac.

The marabou stork’s appearance is unmistakable. Up to 5 feet in height, the bird has a bald, mottled pink head and a massive bill shaped like a wedge. The bill is used to tear open the carcasses of large animals, and having no feathers on the head allows the animal to reach into the guts with minimal fouling.

Its slaty gray and white wings allow the bird to soar on thermals, much like vultures and it has a dangling wattle or gular sac that can be inflated and is used in courtship. Though other birds who have these sacs may use them to hold food, the marabou stork’s sac is only used for display. There’s another sac at the back of the stork’s neck, among a partial ruff of white feathers.

The underside of the bird is white, and it has long slender white legs that end in short toes that are good for walking on the ground, even though the stork is a wading bird. The bones of the legs and toes are hollow, the better to lessen the load in flight. Both sexes look alike, though the males are a little larger. They are not champion short-distance flyers but use thermal wind currents to soar.

Though some flocks stay in an area year-round, others migrate between October and February looking for food, for this is the traditional wet season. They may go farther south all the way to South Africa if the season is unusually wet.

Marabou storks are famous for gathering in large groups, usually near bodies of water. These groups are often found standing around and not doing much of anything for long stretches of time, a behavior that helps the large birds conserve energy. The white of their legs comes from the fact that they defecate on their legs to keep cool. Panting also cools the bird down. After a meal, it will rest on its tarsi to digest. Tarsi are the leg bones between the bird’s “knee” and its ankle.

This stork is different from other storks in that it flies with its neck back, the better to carry the weight of its huge bill.

The stork does not have a voice box and is often silent, which gave it its common name.

The marabou stork is largely a scavenger. It joins vultures at carcasses and visits dumps for food. They will steal food from vultures or snatch a morsel that a vulture has dropped. If the food is too filthy, the stork may wash it in water before eating it. It will also take live prey such as fish, amphibians, insects and, reptiles, especially during the breeding season. It is sometimes found wading with its bill in the water. If the bill is brushed by an aquatic animal, it is instinctively snapped up. Smaller birds, eggs, and hatchlings are also part of the stork’s diet.

The bird is so large and intimidating that adults do not have many natural predators, though large carnivores such as lions and leopards may try to take an adult. Humans hunt marabou storks for medicinal purposes. The most dangerous threats to the marabou stork may be microscopic in the form of parasites such as Echinura, nematodes, and tapeworms that infest birds such as Amoebotaenia sphenoides.

The marabou stork may be eaten by big carnivores such as lions, leopards, jackals, wild dogs, and hyenas if they can catch them.

Marabou storks mate for life and breed during their country’s dry season. This is because it’s easier to pick fish and other aquatic animals out of the water and feed them to the chicks.

The storks have an elaborate courtship ritual that involves much head bobbing and noises made through the gular sac, which connects with the bird’s left nostril and inflates greatly during this time.

The marabou stork breeds in colonies can contain dozens or hundreds of breeding pairs. The female lays two to five eggs, and both parents incubate them for about 30 days. Unfortunately, only one of the chicks will live to grow its first flight feathers, which occurs three to four months after it hatches. The baby marabou stork doesn’t mature until it’s four years old, which is quite aged for a bird. After this, it will have its full adult plumage and leave its parents.

The lifespan of a marabou stork is about 25 years, but they’ve been known to live 41 years in captivity.

There are about 10,000 of these storks in the wild. Thanks to the bird’s predilection for human refuse, the population is growing in places, and its conservation status is least concern.

Some populations of marabou stork move around in search of food, but they don’t migrate the way a bird like an Arctic tern migrates.

How many eggs does Marabou Stork lay?

The stork lays about two to five eggs.

How fast does Marabou Stork fly?

The marabou stork doesn’t fly very fast but is an elegant glider.

What is Marabou Stork’s Wingspan?

The wingspan ranges from 7 to 12 feet.

When do Marabou Stork leave the nest?

Marabou storks leave the nest when they’re about three to four months old.

What is a marabou stork?

A marabou stork is a wading bird that is found in Africa. It is the largest stork in the world, growing to a height of nearly 5 feet.

Marabou storks are reputed to be bad-tempered and may jump out at an annoying human.

Why do marabou storks have neck sacks?

The neck sacks are used in courtship.

Is a marabou stork a bird of prey?

The marabou is not technically a bird of prey, for these birds have talons and hooked beaks, and marabou storks do not. However, marabou storks will hunt live animals.

Is marabou stork a scavenger?

A marabou stork is mostly a scavenger and will eat just about anything it can handle in its habitat.