You can see their internal organs. Click through all of our Glass Frog images in the gallery. 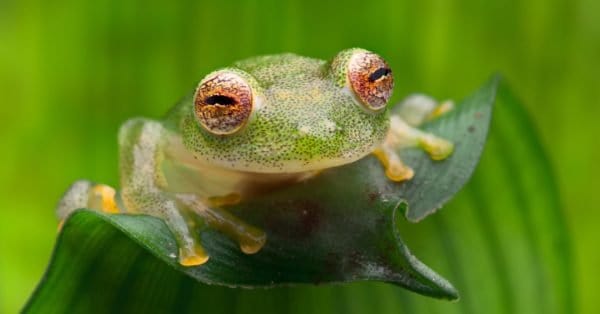 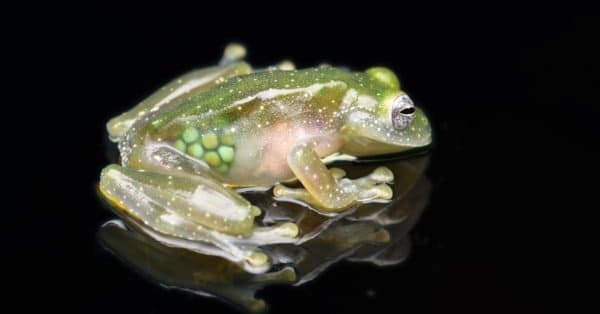 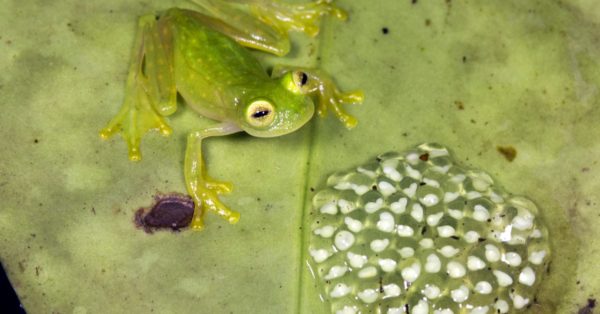 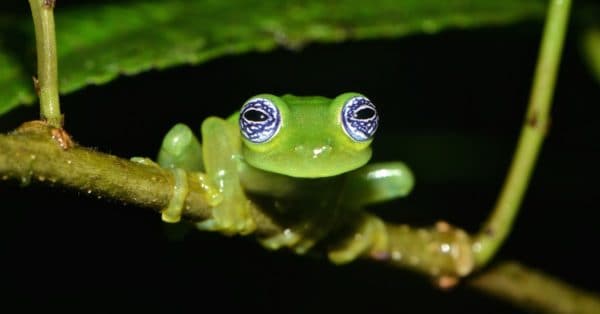 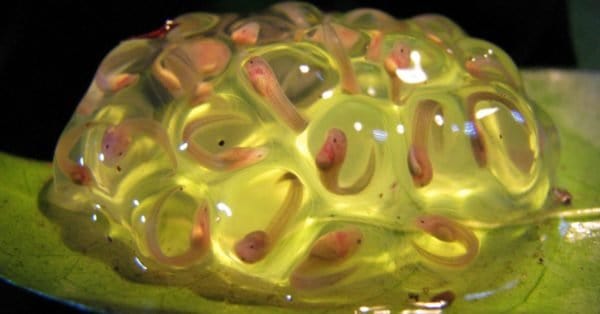 View all of the Glass Frog images!

“If you had a living glass frog in a high school biology class, you would not have to dissect it to see its internal organs.”

Glass frogs are a beautiful, exotic frog that is found in southern Mexico, Central America, and South America. Other exotic animals and fish found in this area are the caiman lizard, coati, cichlid fish, collared peccary, and the howler monkey.

Glass frogs like to live in rain forests in the mountains near flowing streams where it raises its offspring. This frog can slowly climb trees using its sticky webbed-feet and jumps away from predators in one jump that may be up more than 10 feet (3 meters) long. Instead of a croaking sound, it makes a high-pitched whistling sound to attract a mate. If it survives predators’ attacks, it can live from 10 up to 14 years.

The scientific name of the glass frog is Centrolenidae. “Centro” is Spanish/Latin for “center” and “Lenidae” refers to the webbing between the toes.

The first to catalog the glass frog was an American herpetologist, Edward Harrison Taylor, who was the department head of zoology at the University of Kansas in the 1920s. Taylor made many field trips to Mexico and Central American in the 1930s and 1940s. One species of the glass frog, discovered in the Guianas, is named after him. It is the Hyalinobatrachium taylori, which is commonly called Taylor’s glass frog or “ranitas de crystal de taylor” in Spanish.

These frogs are charming and beautiful, almost magical in appearance. Glass frogs are usually tiny and can fit in the palm of the hand. The bodies are lime green on the top and transparent when viewed from underneath, revealing all their internal organs. They may also be white with a reticulated pattern of yellow spots that mimic the appearance of eggs within the female. On the back of the males, this egg pattern helps confuse predators when the males guard the fertilized eggs.

Their rarity and loveliness are enhanced because they are hard to see and even harder to capture. Biologists, who study them in the tropical rainforests, are still discovering new species.

The translucent skin on their belly allows them to rest with legs next to their body and softens the brightness of the edges, making the frog’s outline less noticeable. This gives them a bit of camouflage with less visibility to birds that might be attracted to swoop down and eat them. During the rainy season, when they come down from the trees for mating, it is possible to see the eggs within the females’ body before she lays them for the male to fertilize.

They have big, bulbous, golden-green eyes with black pupils. Their eyes face forward from the top of their heads and rotate independently. They have excellent eyesight, which helps them catch insects to eat.

Glass frogs are nocturnal. They are communal and live in small groups. A group of frogs is called an “army. They hunt for food from dusk until sunrise. When the sun comes up, they find a place to hide in the trees under the leaves in the upper canopy. They sleep all day until it becomes dark again. They almost disappear when hiding in the trees.

They stay high up in the trees during the dry season, far away from any land-based predators. They only come down when it rains.

The glass frogs live in the tropical lowland forest and the mid-elevation mountain forests in Mexico, Central America, and South America. They live in forested areas near mountain streams, which they need to raise their young.

Glass frogs can be found in southern Mexico and in the areas set aside for protecting the biodiversity all the way south to Panama, where they are not forced to make any significant adaptations due to human activity. They are commonly found in the rain forests of Colombia, Costa Rica, and Ecuador.

They live in the Andes in Venezuela and on the island of Tobago. They are found in Bolivia. Some species live near the Amazon and Orinoco rivers, the Guiana Shield region, southeastern Brazil, and the northern part of Argentina.

During the dry season, they live up high in the trees. The dry season is usually from late November to April. It may start to rain a little in May, which is the beginning of the wet season. The heaviest rains are usually from mid-August to November. During this time, the glass frogs have their mating season.

The Glass Frog Conservation Status: About one-third of the species of glass frogs are stable, with two-thirds decreasing. Up to 36 species are threatened at different levels of endangerment. They all have protected status in their countries of origin.

The biggest natural threats to adult glass frogs in the wild are other animals and snakes that climb in the trees where they live. They are also vulnerable to being eaten by birds. When they are closer to the forest floor during the mating season, they are vulnerable to be eaten by lizards and various small mammals.

Glass frog eggs are a tasty snack for wasps and the offspring of frog flies. The frog flies lay their eggs on the clutch of the frog’s eggs. When the fly eggs hatch, the maggots eat the embryos of the frogs. The male glass frog guards the eggs against these predators. When an attacking wasp flies up and tries to eat a frog egg, the male glass frog kicks the wasp away in a quick sweeping move that sends the wasp flying into the nearby forest.

When they are young tadpoles living in water, glass frog tadpoles are vulnerable to be eaten by fish, birds, beetles, and even dragonfly larvae.

What Do Glass Frogs Eat?

Glass frogs are carnivores. They like to eat small insects that they can catch. This includes spiders, ants, crickets, moths, flies, and tiny bugs that crawl along the tree branches. They may also occasionally eat other smaller tree frogs.

Their hunting style is to stay still and wait. They let their prey crawl up until it gets in range and then strike out with their tongue to gobble the insect up.

When the rain comes, this triggers the mating season. As soon as the forest is wet enough, the males descend to hang out on a large tree leaf just above a flowing stream. They make a high-pitched whistle that calls to the females. A female, attracted by the sound, descends to the laying leaf when she is ovulating.

The male mounts her back and waits patiently in rapture until the female lays her eggs on the leaf. After the female expels her eggs all at once, the male fertilizes them. She may lay up to 30 eggs, called a clutch, which flows out of her all at once covered with a clear substance like a liquid glue to hold them safely in place on the leaf.

When her eggs are out, she goes back up into the trees. She leaves the male behind. He guards the eggs for the gestation period of up to two weeks. The males become territorial during the mating season. They will wrestle with other males to be able to fertilize the female eggs. Once on guard protecting a clutch of eggs, the males will whistle again to call other females to lay more eggs. A male may guard as many clutches of eggs as will fit on the large laying leaf.

When the tadpole embryos are large enough, they break out of the eggs and fall off the leaf into the water below. The tadpoles reside in the bottom of the stream, living among the detritus on the bottom for up to ten months until they grow into adult frogs. The ones that survive to adulthood climb back out of the water. They climb back up into the trees to join the rest of the glass-frog family waiting for them.

One of the most interesting facts is that glass frogs have the potential for long life. They may live for 10 to 14 years if they avoid being eaten by predators and can make adaptations if any climate changes require them.

The sad facts are, there is an unknown number of glass frogs remaining. Up to 36 species are endangered. There is a movement in Costa Rica and elsewhere to protect their habitat. Species are being lost as the rain forests are cut down to make way for human agricultural activities. Cutting down the jungle destroys the habitat of the glass frogs. They are not able to make the adaptations necessary to survive this human onslaught.

What is a glass frog?

A glass frog is a small amphibian found mostly in the Central and South American rain forests.

Why are these frogs called glass frogs?

Glass frogs are called this because of their translucent nature that allows an observer to look into their bodies as if their skin was made of glass.

What do glass frogs eat?

They will eat any insect or smaller frog that comes close enough to be gobbled up by them as their next meal.

Where does a glass frog live?

Most of the time, they live in the tree canopy in the lush rain forest, high above the ground. However, when it is mating time, they come down to mate. The female lays eggs on a big leaf hanging over a stream where the male fertilizes them. Then, the male stands guard until the eggs hatch.

Can you have a glass frog as a pet?

Yes, but they are endangered and therefore difficult to obtain legally and very expensive. Some are raised in captivity as a pet. They sell for up to $1,000 for a male and a female for breeding purposes. They are excellent pets but do require the proper conditions in a terrarium. They have a voracious appetite and need to eat a lot of live bugs.

They are not poisonous at all. They are very gentle and harmless.