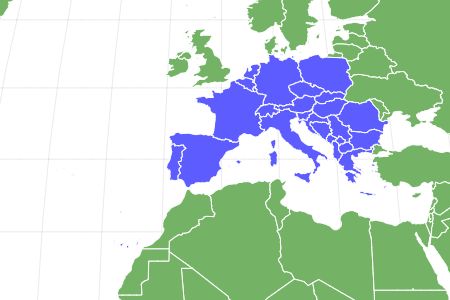 View all of our Fire salamander pictures in the gallery.

View all of the Fire salamander images!

As a middle to a large-sized and strongly built salamander, it is so well-known not only due to its prevalence but bright warning colors and poisonous liquid spray. Its name comes from the old belief that it came from fire. As an exotic-looking amphibian, it is also commonly kept as a pet.

The fire salamander belongs to class Amphibia (amphibians), Order Urodela (lizard-like amphibians), Family Salamandridae (true salamanders and newts). It belongs to the genus Salamandra, which has 6 species of salamanders found in central and southern Europe, North Africa, and Western Asia.

The scientific name of the fire salamander is Salamandra salamandra, with S. salamandra salamandra (spotted fire salamander) being the nominate subspecies or species type. There are 13 subspecies. 2 subspecies (fastuosa and bernadezi) are viviparous, meaning the young develop inside the mother and are born live, while the rest are ovoviviparous, meaning the young develop in eggs inside the mother until they’re ready to hatch.

The colors of the fire salamander are primarily black with yellow blotches and spots, although in certain subspecies orange and red may replace or mix into the yellow. Males and females are alike in appearance, except during the breeding season when the males have a swollen gland around their vent, which contains a spermatophore. It grows to a length of 15–30 cm (6-12 in), but usually only reaches half of that and a weight of about 40g (0.09lbs).

A middle to large-sized salamander species, it has a strongly built body. Another characteristic, per its Subfamily Salamandrinae, is the rough skin and lack of rib or costal grooves along the sides of their bodies. In Europe, it is the largest salamander species.

The behavior of the fire salamander is largely solitary. A reclusive amphibian, it prefers to hide under logs, leaves, other objects, and around mossy tree trunks. It is nocturnal, being active in the evening and at night, but they are diurnal when it rains.

The natural habitat of these animals is the forest, its biome being deciduous, hilly forests and mountain ranges in Europe, North Africa, and cooler areas of the Middle East. Small brooks, streams, or ponds are necessary in its biome so they can soak themselves. It lives at altitudes between 250 meters (820 ft) and 1,000 meters (3,300 ft) and rarely as low as 25 meters (82 ft).

The fire salamander’s diet is carnivorous. It preys upon insects, spiders, earthworms, slugs, newts, and young frogs. In captivity, its diet consists of crickets, mealworms, waxworms, and silkworm larvae. When catching prey, it uses its teeth or tongue to grab them.

These animals has few natural predators, due to the toxins in its skin, which can sicken or kill predators, as well as the liquid spray it produces when threatened. Toxin glands are concentrated around its head, dorsal skin surface, and tail. Its primary alkaloid toxin, samandrin, causes strong muscle convulsions, hypertension, and hyperventilation in all vertebrates. Grass snakes have been known to eat adult fire salamanders, while other predators prefer to catch the young. Larger reptiles, hawks, and eagles may occasionally prey upon the fire salamander if are immune or develop an immunity to its toxins.

The biggest threat to these animals is the Bsal fungus (Batrachochytrium salamandrivorans), which was accidentally introduced from Asia by people importing Asian newts to sell as pets. This deadly fungus makes it impossible for them to absorb oxygen through their skin or eat. Since its discovery in 2013, Bsal has killed thousands of native salamanders in Europe.

These animals have two different forms of reproduction in their subspecies. Two subspecies (fastuosa and bernadezi) are viviparous, meaning the young develop inside the mother and are born live. All of the other subspecies are ovoviviparous, meaning the young develop in eggs inside the mother until they’re ready to hatch. Unlike other species of salamanders, they give birth to live young but still live near small brooks, ponds, or streams in order to soak themselves.

Breeding season begins in spring and lasts until autumn, most common during late spring and early summer, with mating on land biomes. Those subspecies living in warmer climates, such as in the Middle East, mate between October and January. Gestation usually takes place during hibernation for 2-5 months. Fire salamander reproduction is sexual, with the male confronting the female and blocking her path, then rubbing her with his chin to express interest. He then grabs her front limbs with his own, deposits a spermatophore (which contains a sperm packet), and attempts to lower the female to get her cloaca in contact with it. If successful, the female draws in the sperm packet and fertilizes the eggs inside her body.

The eggs develop internally and when they are hatching, the female deposits them into the water in those subspecies where the larvae are not born live. She can give birth to 20-75 young with an average of 20-30. The young reach sexual maturity at 4-6 years.

The numbers of these animals are stable and listed as Least Concern according to the IUCN. However, research on estimated population sizes is needed.

What is a fire salamander?

A fire salamander is a common salamander species in central and southern Europe, so-called due to its fiery colors.

Many of them are, yes.

Are fire salamanders resistant to fire?

No. This belief stems from their fiery colors as well as the old myth that they came from or were born out of fire, due to their hiding and running out from under logs when people would gather them to make fires.

Can you touch a fire salamander?

Yes, but it is preferable to wear gloves when doing so. The toxins are not poisonous unless they are ingested.

What is the lifespan of a fire salamander?

The fire salamander can live anywhere between 6-50 years.