Its song has been compared to a toy horn. 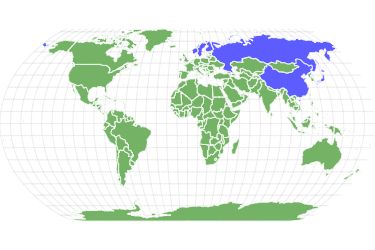 View all of our Eurasian Nuthatch pictures in the gallery.

View all of the Eurasian Nuthatch images!

Eurasian nuthatches are omnivores with a diet of insects, seeds, and various types of nuts. They live in a forest habitat made up of older, deciduous trees. These birds make a high-pitched sound that has been compared to a toy horn. Their lifespan is usually two to three years, but some live much longer.

Where to Find Eurasian Nuthatch

This bird’s home region is revealed in its name. It lives in parts of Europe and Asia. Specifically, they are found in Scandinavia and all the way across Russia into Japan and the northern part of China. These birds live in a temperate climate.

The best time to see these birds is in April or May. This is their breeding season so they’re especially active. They are plentiful across their geographical range. These birds spend a lot of time in the treetops. They can also be seen hopping along tree trunks foraging for insects in the bark.

One of the most interesting facts about these birds is they are sometimes confused with woodpeckers despite the size difference. But these birds are from different families.

When you look at the small size of this bird it’s not surprising that it makes a small nest! A female makes a nest inside the cavity of a tree or uses a nest that’s been abandoned by a woodpecker. Eurasian nuthatches have a cup-shaped nest made out of wood chips with a lining of mud to make it waterproof. They are territorial birds and are aggressive about defending their nesting area.

The scientific name of a Eurasian nuthatch is Sitta europaea. These birds are sometimes called wallcreepers. This is due to their habit of hopping along brick or stone walls foraging for insects in the cracks. The Latin name Sitta refers to its genus while europaea refers to where this bird is found. Furthermore, they are called nuthatches because of their habit of wedging nuts into the crevices of trees to eat later. They are from the Sittidae family and belong to the Aves class.

Some types of Eurasian nuthatches include:

A male Eurasian nuthatch has blue/gray feathers on its back with a bright orange breast. It has a long, thin beak similar to that of a woodpecker. There is a black horizontal stripe across each of its eyes. The female has the same pattern of feathers but is duller in color. In the world of birds, one of the most common facts to remember is many female birds are less colorful than males of the same type. This can be true even if the female and male have the exact same pattern of feathers.

The blue/gray feathers of this bird help it to blend in with a tree branch or tree trunk when it is foraging for food. This camouflage can hide them from some of their predators.

Their long, narrow beak gives them the tool they need to find different types of insects living in the bark of a tree. Also, they use their beak to push nuts into crevices or hatches, in a tree to snack on later.

Most Eurasian nuthatches don’t migrate. However, some living in the extreme northern parts of their range may migrate south a short distance to avoid really cold weather in the wintertime.

If you’re not a bird enthusiast, you are likely to mix up these two nuthatches due to their similar appearance. They both have blue/gray wings and an orange or redbreast. Also, they make a distinctive, high-pitched sound. Both of these birds have a long, thin beak made for foraging in tight spaces. But there are some differences between them that can help with proper identification.

Though both birds have a black stripe over each eye, a Red-breasted nuthatch has more white feathers on its face than a Eurasian nuthatch.

Identification is a little easier if you know where the birds live. While the Eurasian nuthatch comes from Asia and Europe, the Red-breasted nuthatch lives in North America, specifically in the United States up into Canada. They live in a woodland habitat as well.

When it comes to size, the Eurasian nuthatch is longer and has a larger wingspan than a Red-breasted nuthatch.

Though the lifespan of these birds is about the same, Eurasian nuthatches tend to live a little longer.

These birds are omnivores. They are expert foragers and are commonly seen wedging food into the bark of a tree to eat later.

What does a Eurasian nuthatch eat?

These birds have a diet of beetles, caterpillars, and worms. In addition, they eat seeds and nuts.

What eats a Eurasian nuthatch?

Hawks and owls are the main predators of this songbird. Both of these birds are fast and powerful giving them a big advantage over Eurasian nuthatches. They can swoop down and grab this bird without much effort.

These birds nest in large, mature trees. Unfortunately, deforestation is taking away some of the habitats of this bird. But, despite that, its conservation status is Least Concern with a stable population.

Eurasian nuthatches are monogamous. This bird lays from six to nine eggs in the spring season (April to May). When looking at egg identification, they are white with red speckles. Each egg is about the size of a jelly bean. The incubation period for the eggs is 13 to 18 days. Both the male and female share the responsibility of feeding the chicks as they grow into fledgling birds. The fledgling birds leave the nest at about two weeks old.

The typical lifespan of this bird is from two to three years.

View all 68 animals that start with E

Most of these birds don’t migrate with the exception of some that live in the far northern regions. These birds may migrate south a short distance to escape the extremely cold winter temperatures.

How many eggs do Eurasian nuthatches lay?

They lay from six to nine eggs in a clutch.

How fast does a Eurasian nuthatch fly?

What is a Eurasian nuthatch’s wingspan?

When do Eurasian nuthatches leave the nest?

The fledgling birds leave the nest at about two weeks old.

What do Eurasian nuthatches eat?

Eurasian nuthatches have a diet of beetles, caterpillars, nuts, and seeds.

Where do Eurasian nuthatches live?

This bird lives in parts of Europe and Asia.

Are woodpeckers and Eurasian nuthatches related?

Though they share some similarities, one of the most important facts to keep in mind is these two birds belong to different families. Woodpeckers are much larger in size than Eurasian nuthatches. There are some types of woodpeckers that can measure as long as 20 inches and weigh 20 ounces.

The habitat of these birds is another reason why some people think they are related. Many Eurasian nuthatches make their nests in tree cavities abandoned by woodpeckers. So, a bird flying in and out of a hole in a tree may not necessarily be a woodpecker!