Can have a wingspan of up to 3 meters! Click through all of our Pelican images in the gallery. 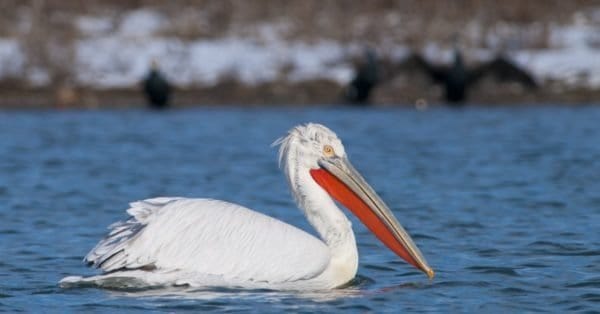 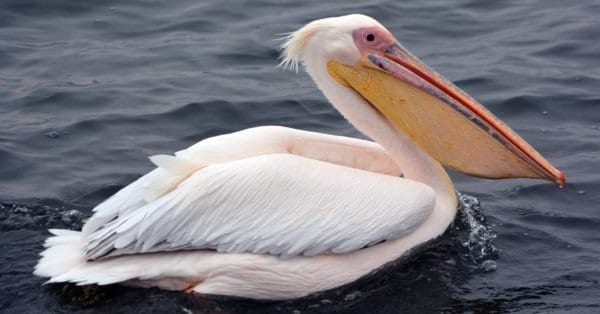 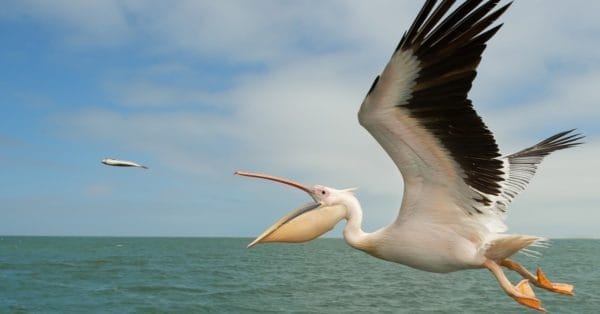 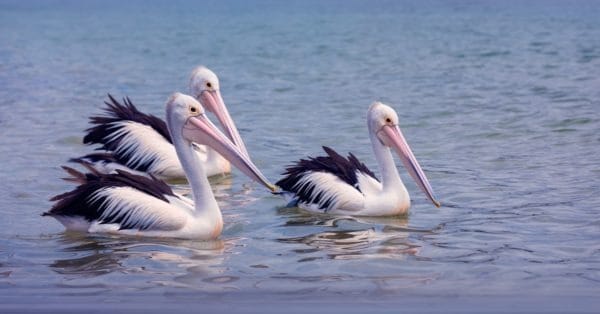 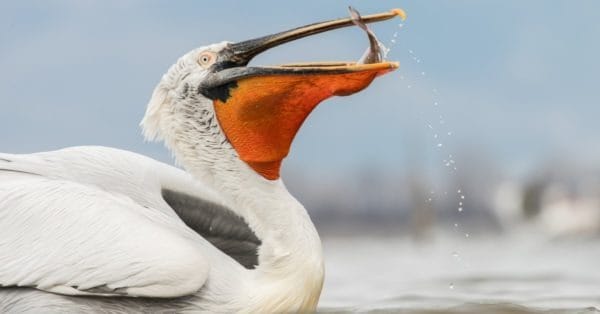 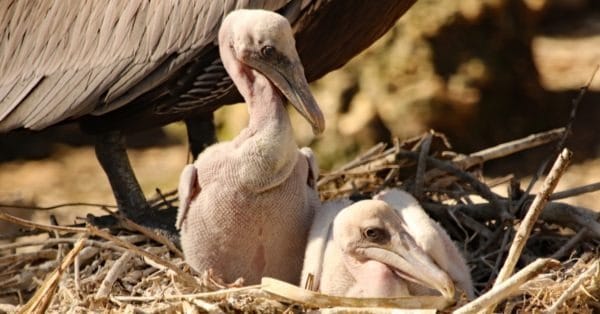 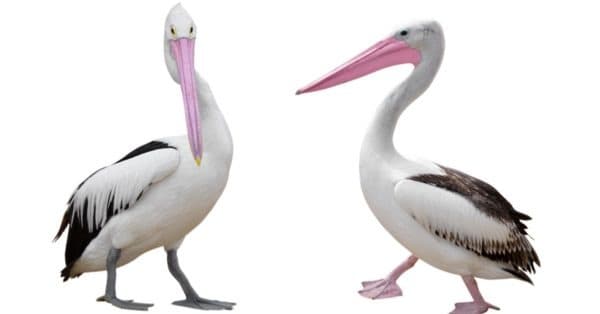 View all of the Pelican images!

With their distinctive stocky build and unique bills, pelicans are birds that have been a symbol of popular culture since medieval times, appearing in art and on coats of arms.

These waterfowl are known for the massive amounts of fish they consume, often eating as much as four pounds per day. One of the lesser-known facts about the pelican bird involves the high altitudes at which they can fly.

Easily recognized by their large body sitting on short legs and a long wingspan, these birds are also characterized by their webbed feet, long necks, and, most notably, their unique beak and accompanying large pouch. Their tails are short and square, while their wings are long and broad, making them suitable for gliding on air currents. Most of them have light-colored plumage, except for brown and Peruvian pelicans, the latter of which have bright feathers.

All of these birds become brightly colored around their bills, pouches, and facial skin during the breeding season. Most also develop a knob on the upper part of their bills, which falls off annually when breeding season has finished. The largest species is the Dalmatian pelican, weighing 22 to 26 pounds, while the smallest is the brown pelican at only eight to ten pounds.

These birds have the largest beaks of any bird. In some species, the beak can reach up to 18 inches long. The large pouch, called a gular, underneath the beak is the pelican’s most unique feature. These birds use their unique anatomy primarily to scoop up fish and then drain out the water that comes with their catch, but some birds also use their beak pouch as a way to cool themselves by swinging it back and forth on warm days. The upper part of the beak also has a downward hook, which these birds also use for catching fish. Male Australian pelicans have the longest bills of any species, measuring 1.6 feet long.

These birds are extremely social birds, living in colonies of several hundred individuals. Groups of these birds are known by many different names, including brief, pod, pouch, squadron, and scoop. They like to be around other bird species, too, including cormorants or flamingos. Depending on the species, they built nests in trees, bushes, or on the ground. When they are not eating, they spend their time sleeping, sunbathing, or preening. At dusk, the bird will settle down to sleep with their heads resting back on their shoulders, eyes closed, and feathers ruffled against the cold.

You’ll often see these birds migrating in flocks, either in a V formation or a single line. Both sexes remain grouped throughout the year along with their young. Generally, they only become vocal when in their breeding colony, grunting to express excitement. Adults rely on visual displays using their wings and beaks to communicate. Among the more interesting facts are chicks are generally quite vocal before they leave the nest. They hiss through gaping bills to express displeasure. Some birds will also clap their beaks while looking up or gape, bow and wag their heads to defend their territory.

These birds live on all continents except Antarctica, usually in warm climates near coastal or inland waters such as lakes and rivers, although their range can extend to temperate climate types with defined seasons. They like to congregate on islands whenever possible.

These birds are carnivores, eating a diet primarily of fish. Their favorites are carp, shiners, mullet, and minnows, although preferred fish vary by species. They will also eat amphibians, crustaceans, insects, other birds and, even small mammals. They eat in groups or by themselves, although Dalmatian and pink-backed pelicans prefer to eat alone. Brown and Peruvian pelicans spot their prey at great heights and then dive into the water to retrieve their catch.

Because of their large size, these birds have few predators. Wild dogs and coyotes can be counted among their predators, along with cats. However, the greatest threat to their existence comes from humans. The use of the insecticide DDT in the 20th century caused their eggshells to thin, almost wiping out brown pelicans. As more people moved to coastal areas, development intruded on pelican nesting areas. After DDT was banned in 1972, the brown pelican population rebounded. They are no longer considered endangered but are listed as vulnerable.

Dalmatian pelicans, native to parts of eastern Europe around the Mediterranean and some parts of western Asia, also face human threats as their wetlands habitat is shrinking. Recent conservation efforts have helped steady their numbers.

Many different species in heavily populated areas have become dependent on people feeding them, which encourages them to stop hunting. Pelicans who beg food from humans don’t get proper nutrients and run the risk of succumbing to disease. Others tend to hunt in areas where commercial fishermen have cast their nets and hooks. The birds become entangled in them, with some fishermen only cutting them free, not removing the netting or the hook, thus endangering the birds’ lives. Oils spills, water pollution, and chemical dumps also threaten pelicans.

These birds are monogamous for a single season. Males use various tactics to attract females when mating. Some pelican species only mate seasonally, while others can mate all year long. Males in some species change the color of their pouch and neck feathers during courtship to attract females. Both sexes are involved in building nests that usually consist of feathers, leaves, and sticks. Ground-nesting species have a complicated courtship ritual that consists of several males chasing after one female. Tree-nesting species have a more simple courtship where males advertise for females.

Copulation occurs at the nest, three to 10 days before egg-laying. Both males and females are in charge of building the nests, using feathers, leaves and sticks. Females can lay anywhere from one to six eggs, depending upon the species, which take 30 to 36 days to incubate.

Both parents incubate the eggs by standing on top of them. Eggs hatch in the order laid, with the first chick usually being the largest. Hatchling chicks are naked and pink, eventually darkening to great or black within 14 days, followed by a covering of white or grey down. Immature pelicans have feathers that are darker than those of their parents. Young pelicans feed by sticking their beaks into their parents’ gullet to retrieve regurgitated fish.

When chicks are about 25 days old, they begin to gather in pods of other young birds. Parents recognize and only feed their offspring. By two months, they begin to go further afield and occasionally swim, sometimes practicing communal feeding. By 12 weeks, they leave the nest, sometimes remaining with their parents but are rarely fed by them. Pelicans are sexually mature at three to four years of age.

Pelicans have a lifespan of 10 to 30 years in the wild; the oldest recorded wild animal of this genus lived to 43 years.

The National Audubon Society estimates the world population of brown pelicans at about 300,000, while Peruvian pelicans number 350,000. Pelicans have a population ranging from 10,000 to 13,900. About 100,000 white pelicans live in North America, while Europe is home to as many as 10,000 breeding pairs. Australian pelicans are widespread, with an estimated 300,000 to 500,000 birds spread across the continent.

Birds in the Zoo: Where to find the Pelican

In zoos, pelicans share their habitat with cormorants, ducks, and other water birds. They reside in some of the most popular exhibits at the San Diego Zoo Safari Park, which is the only zoo in North America to have great white, Dalmatian, and pink-backed pelicans.

Are Pelicans herbivores, carnivores, or omnivores?

Pelicans are Omnivores, meaning they eat both plants and other animals.

What Kingdom do Pelicans belong to?

Pelicans belong to the Kingdom Animalia.

What class do Pelicans belong to?

Pelicans belong to the class Aves.

What phylum to Pelicans belong to?

Pelicans belong to the phylum Chordata.

What family do Pelicans belong to?

Pelicans belong to the family Pelecanidae.

What order do Pelicans belong to?

Pelicans belong to the order Pelecaniformes.

What type of covering do Pelicans have?

Pelicans are covered in Feathers.

What genus do Pelicans belong to?

Pelicans belong to the genus Pelecanus.

In what type of habitat do Pelicans live?

What is the main prey for Pelicans?

What are some predators of Pelicans?

Predators of Pelicans include humans, cats, and coyotes.

What are some distinguishing features of Pelicans?

Pelicans have a pouch hanging from the underside of their beaks and keen eyesight.

How many eggs do Pelicans lay?

What is an interesting fact about Pelicans?

Pelicans can have a wingspan of up to 3 meters!

What do pelicans eat?

Their diet consists mainly of fish, but they will also eat turtles, tadpoles and crustaceans and may eat as much as four pounds of fish per day.

Where do pelicans live?

They live throughout the world, except in Antarctica, and are most numerous in semi-tropical and tropical climates, especially in the Gulf of Mexico, where they are an iconic symbol of the region.

Pelican are large birds with long necks, big bodies that sit on short legs with webbed feet, and a distinctive pouch for catching fish.

How much do pelicans weigh?

Pelicans are generally among the world’s largest bird, weighing eight pounds up to 30 pounds.

Each bird has a distinct personality. They are generally friendly birds, but experts recommend that you don’t touch them because of their size and ferocity when alarmed.

Most species migrate, although some birds, particularly colonies living in Florida, will spend the winter in their summer habitats.

How many eggs does a pelican lay?

Most species lay two to three eggs, although some can lay as many as six.

How fast do pelicans fly?

Pelicans can fly as fast as 30 mph but often prefer to spend their time in the air gliding while searching for food.

What is a pelican's wingspan?

Some pelican species have a wingspan of 6.6 feet to over 11 feet.

When do pelicans leave the nest?

Fledglings leave their nests 10 to 12 weeks after hatching.

What is the lifespan of a Pelican?