Click through all of our Black Widow Spider images in the gallery. 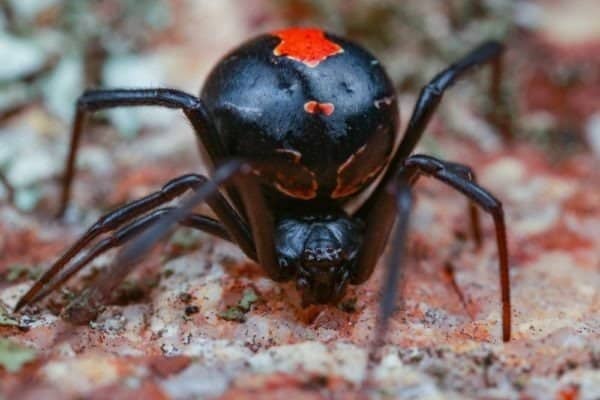 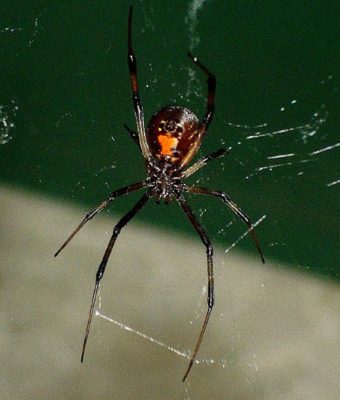 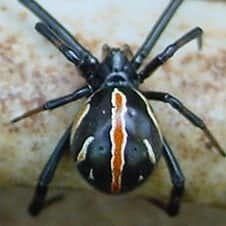 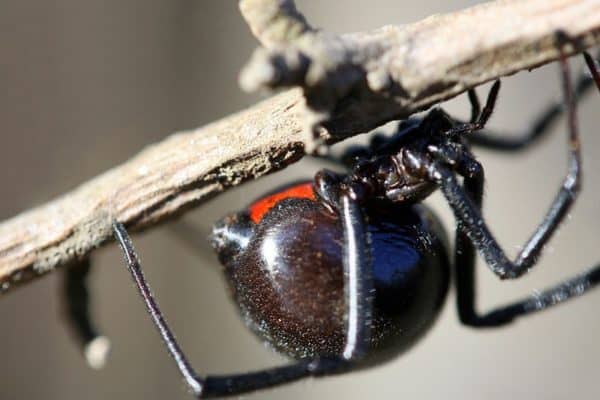 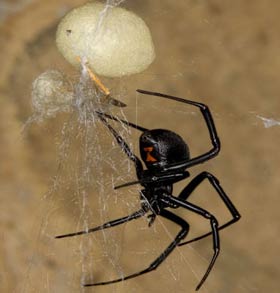 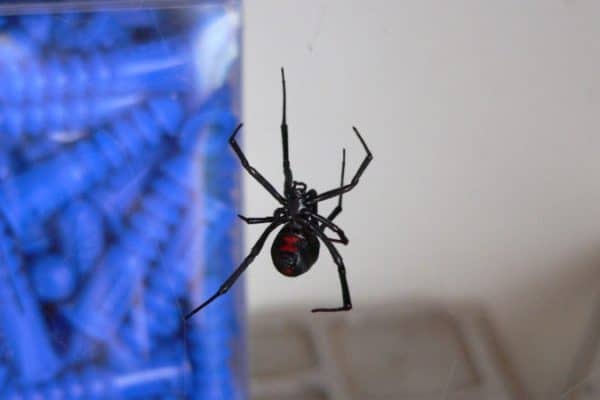 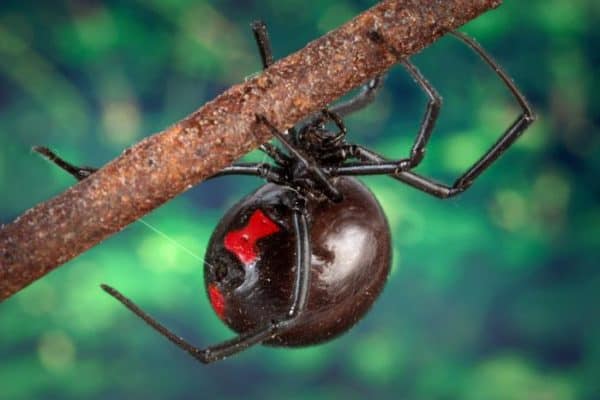 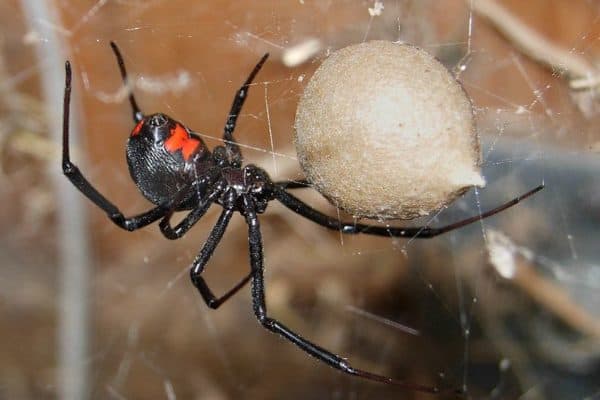 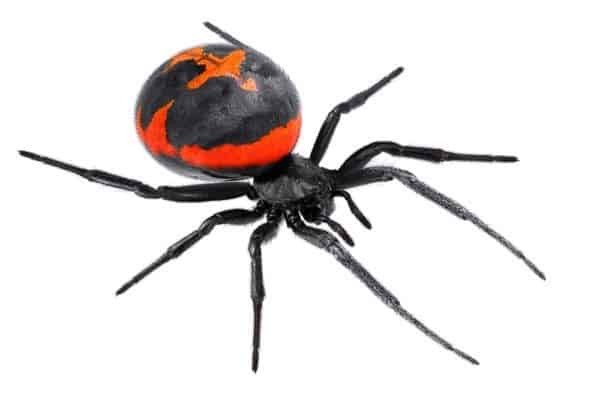 View all of the Black Widow Spider images!

“Only the Bites of Female Black Widow Spiders Are Dangerous”

Their reputations are fierce, but in reality, black widow spiders — aka Latrodectus — are calm, loner pacifists that only unleash venomous bites when they’ve exhausted all other defensive options. Thirty-two species of the infamous arachnids populate the Earth on every continent except Antarctica, and the genus probably popped onto the world scene about 300 million years ago.

Female black widows carry large loads of venom, but males don’t. And though it’s widely believed that all females eat their mates after breeding, such behavior is rare and only happens in lab environments where there’s no escape.

Latrodectus is the scientific name for widow spiders. A portmanteau combining the New Latin word “latro,” meaning “bandit,” and the Ancient Greek word “dēktēs,” meaning “biter,” it was coined by French nobleman Baron Charles Athanase Walckenaer in the early 1800s. Colloquially, the name translates to “bandit who bites.”

Nearly all black widow spiders are about 1.5 inches long, weigh approximately 0.035 ounces, and have dark-colored, hourglass-shaped bodies accented with white, brown, or red markings. Like most web-weaving spiders, widows have terrible eyesight and rely on vibrations to sense prey and danger.

Unlike the Goliath birdeater (Theraphosa blondi), the world’s largest spider, black widows are tiny — about the size of a paperclip. But don’t let their compact bodies fool you — because widows pack dangerous loads! Their bites release a neurotoxin called latrotoxin, which can cause extreme pain, muscle rigidity, vomiting, and heavy sweating. People bitten by black widow spiders may experience these symptoms for up to a week. But it’s false that widow bites routinely result in human fatalities. They do, however, kill cats and dogs.

In the black widow world, only females do damage. Males of the species don’t carry enough venom to harm.

Widow spiders are notorious for female sexual cannibalism — meaning the ladies eat their gents after mating. But what people may not understand is that it doesn’t happen all that often, and not all widow species engage in the practice.

So why do some Latrodectus ladies murder their mates? Nobody knows for sure, but a popular theory postulates that the act increases the odds of offspring survival. Additionally, thanks to special chemicals that emanate from webs after meals, males can sense when females are well-fed, and most don’t choose hungry mates. In fact, most males who fall prey to their partners are trapped in a laboratory environment and can’t escape.

Typically, black widow spiders spin webs near the ground or in dark, low places. Inside, you’ll most likely find them in dark corners under desks, basements, and attics. Outside, they hunker in holes and wood piles.

What do black widow spiders eat? They prey on small insects like flies, mosquitoes, grasshoppers, beetles, and caterpillars.

How do black widows catch food? Like most other spider species, black widows weave sticky webs of silken fibers. When waiting for food to stumble into their lairs, widow spiders hang upside in the middle of their nets. When a victim crashes in, they’re incapacitated by the web’s stickiness. At that point, the spider converges, paralyzes the prey with venom, and then wraps its meal in silk to further prevent escape.

When a black widow is ready to dine, it covers its prey in erosive digestive juices and slurps up the remains. If a widow senses danger, it will quickly crawl down a loose web thread and scurry to safety.

Few animals prey on black widow spiders because of the insects’ body shapes and markings, which scientists believe send unpleasant signals that repel most animals.

But rules come with exceptions, and in this case, the three are praying mantises (Mantodea), alligator lizards (Anguidae), and blue mud wasps (Chalybion californicum), which use their stingers to paralyze before chowing down.

Humans also pose a threat to black widow spiders because we accidentally crush them and purposefully kill them when stumbling upon the species at home.

Widow spiders are solitary animals that only come together in late spring for mating season. During the yearly ritual, males and females partner up, and the former injects the latter with sperm. The ladies then fertilize their eggs internally and lay silken egg sacs.

The sac incubates for about 30 days, at which point a pod of self-sufficient spiderlings hatch. The moment they’re born, baby spiders scurry away from the nest. The wind often helps them along, and most find themselves far away from home within hours of birth.

But a black widow’s life isn’t long. Many die before they reach a month old, and few — mostly females — make it to three years old.

Black widow spiders aren’t in danger currently. The International Union for the Conservation of Nature doesn’t even include the animal on its Red List. IUCN does list false widow spiders, but only under the Data Deficient section.

Black widow spiders live in hundreds of exhibits and labs around the world. Here’s a partial list of U.S. zoos that care for individuals from the genus:

Widows eat other insects, which makes them carnivores.

In one sense, yes, they are. Female black widows carry heavy venom loads that sometimes cause illness and prolonged pain. On average, about 2,200 venomous black widow spiders bite people in the United States yearly, but the vast majority of attacks don’t result in hospitalization. In fact, no black-widow-related deaths have been reported to the American Association of Poison Control Centers since 1983.

Can Black Widow Spiders Kill You?

Theoretically, yes, black widow spiders can kill — and have killed — humans! But you’re more likely to win the lottery than die from a black widow attack! However, exercise more caution in the Meditteranean, home of the Latrodectus tredecimguttatus, the most deadly black widow species of all.

Where Are Black Widow Spiders Found?

Globally speaking, species of the spider crawl around every continent except Antarctica. Locally speaking, black widow spiders tend to weave webs in undisturbed, dark areas, including wood piles, basements, and in the corners of seldom-used cabinets and furniture.

How Do You Kill a Black Widow Spider?

Black widow spiders can be eliminated in several ways.

To keep them from moving in, vacuum and dust regularly — even the basement and attic. Neglected woodpiles are like catnip to black widows, so clean them off weekly! Widow spiders smell through their feet and are repulsed by the scent of lemon, eucalyptus, tea tree oil, and peppermint. As such, if you’re on a mission to repel the spiders, use cleaning products infused with those aromas!

If a widow has already spun a web, aerosol and powdered pesticides sprayed or sprinkled directly on the spider or nest will kill it. Vinegar is an effective natural option. But natural doesn’t mean humane. Vinegar works because its acidity burns widows on contact — and that’s not a pleasant way to go, whether you’re a human or an insect.

For a less violent solution, make a home-made black widow repellent by combining equal parts vinegar and water in a spray bottle. Mist the corners of all your rooms and cabinets with the substance to keep the buggers at bay!

Despite their ferocious reputations, black widow spiders aren’t big biters. When feasible, they prefer to avoid conflict and play dead. Their second-best defensive option is flicking silk at a threat. But when they’re trapped and have nowhere else to turn, they will attack. Male strikes are harmless because they don’t carry much venom. But a female bite can lead to a few uncomfortable hours for humans, and maybe death for dogs and cats.

What Kingdom do Black Widow Spiders belong to?

What phylum do Black Widow Spiders belong to?

What class do Black Widow Spiders belong to?

What family do Black Widow Spiders belong to?

What order do Black Widow Spiders belong to?

What genus do Black Widow Spiders belong to?

What is the main prey for Black Widow Spiders?

What are some predators of Black Widow Spiders?

What are some distinguishing features of Black Widow Spiders?

How many babies do Black Widow Spiders have?

The average number of babies a Black Widow Spider has is 250.

What is an interesting fact about Black Widow Spiders?

What is the scientific name for the Black Widow Spider?

The scientific name for the Black Widow Spider is Latrodectus.

How to say Black Widow Spider in ...