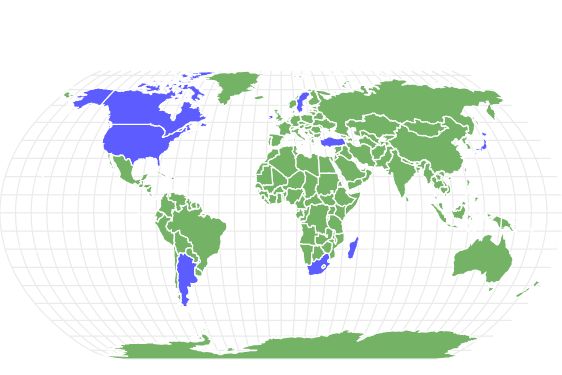 View all of our Night Heron pictures in the gallery.

View all of the Night Heron images!

Night herons have a wingspan of 45 to 47 inches.

Night herons can be seen walking on the shorelines of marshes and wetlands in search of fish, frogs, and insects to eat. This bird is known for its long, thin legs, intense gaze, and crown of feathers. The territory of various types of night herons extends over six continents. Its call has been compared to the croaking sound made by a raven.

Where to Find Night Heron

Where do you find night herons? The answer: Almost everywhere! Night herons are seen on six continents including North America, South America, Asia, Europe, Africa, and Australia. They live in temperate and tropical climates. Their habitats include wetlands, marshes, and mangroves where they can search in the water and on land for food.

Take one look at this bird’s name and you know it’s most active during the night. So, if you want to see a night heron, it’s best to grab a flashlight before visiting a marsh or mangrove.

Spring and late summer are the breeding seasons of this bird. This is when they’re especially visible as they build nests in the trees or on the ground.

These birds live in dozens of countries across the above continents. Some of these countries include:

The male night heron searches for twigs and sticks on the ground. When he finds a sturdy stick or twig, he gives it to the female of the pair who uses it to build the nest. The nest may be in a tree or on the ground in a sheltered area among a gathering of tall weeds.

The nest of a night heron measures from 12 to 18 inches in width and can be from eight to 12 inches tall. The structure has sticks and twigs of different sizes sticking out at every angle. But there’s ample space to accommodate three to eight two-inch-long eggs.

It’s in the Ardeidae family and in the Aves class.

Juvenile black-crowned or black-capped night herons have brown feathers with some white spots mixed in. Its beak is not yet deep black like an adult night heron’s beak.

An adult night heron has a long, pointed beak it uses to grasp fish, insects, and other prey. It walks on its long, thin legs through the water and grasps tree branches with its four sharp claws.

Along with using its long, pointed beak to find food, the night heron uses it to defend itself. Luckily, its habitat high up in the treetops helps it to avoid many predators.

All types of night herons including black-crowned and yellow-crested varieties are carnivores. They hunt for food at night by standing perfectly still in or near the water until a fish swims close by. Within seconds, the bird grabs it and swallows it!

What does a night heron eat?

Frogs, fish, and insects are all prey in the diet of night herons.

Adult night herons spend time high up in the trees which makes them less vulnerable to predators. But, they do have some including owls and foxes.

Hatchling and juvenile night herons are more likely to be preyed upon by foxes and owls because they are smaller and not as strong as adult birds. Furthermore, raccoons and snakes have been known to steal night heron eggs out of a nest to eat them.

Habitat destruction is another threat to adult night herons. Drainage of the wetlands has affected the population of this bird. Their population has also been affected by pesticides in the insects they eat.

Steps have been taken to help night herons including setting up protected areas where they can breed. The IUCN Red List of Threatened Species categorizes it as Least Concern, but with decreasing numbers.

Male and female night herons are monogamous and both parents take care of the eggs. Female night herons lay three to eight eggs in late spring or early summer. After 21 or 22 days, the eggs hatch. The chicks leave the nest at just two weeks old. The chicks grow quickly into juvenile birds. They remain in the nesting area until they can live independently at six to seven weeks old. These birds are sexually mature at the age of two or three years.

Does a night heron migrate?

Some night herons migrate to warmer climates while others are residents in certain areas year-round.

How many eggs does a night heron lay?

How fast does a night heron fly?

This bird can fly 35mph and sometimes faster.

What is a night heron’s wingspan?

When do night heron’s leave the nest?

The chicks leave the nest at two weeks old but remain in the area until they can survive independently at around six or seven weeks of age.

It is called a night heron because it’s active at night and sleeps during the day.

It is called a night heron because it’s active at night and sleeps during the day.

These birds are found in Africa, Australia, North America, South America, Europe, and Asia. They occupy a wetland, mangrove, or marsh habitat.

What does a night heron eat?