Uses vibrations to communicate with other fish

Click through all of our Squirrelfish images in the gallery. 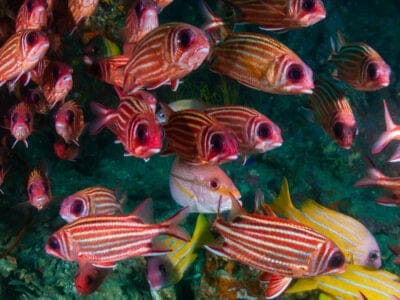 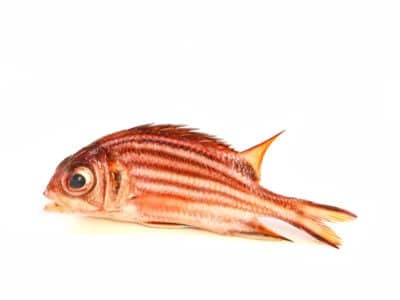 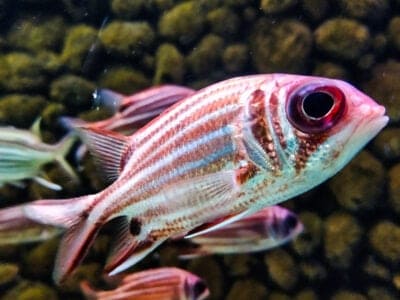 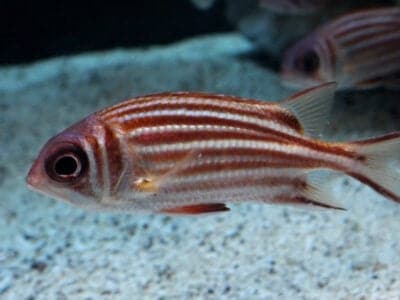 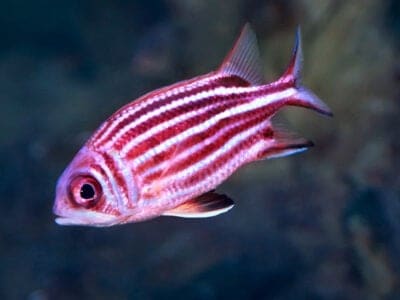 View all of the Squirrelfish images!

The squirrelfish is a tropical reef fish that inhabits warm ocean waters. It’s a nocturnal hunter with huge eyes that allow it to see in the dark. Its diet includes plankton and small, larval crustaceans. This fish is a popular choice for home aquariums because of its unique features, bright colors, and healthy constitution.

There are 70 species of squirrelfish.

Like many reef fish, it is bright and colorful. It usually has bright red or deep pink stripes that can appear like a solid wash of color on some fish. It has sharp, scaly fins in yellow, white, or black. The scales on their bellies and fins often shade to a pale silver color. These colors help them blend in with the coral where they hide.

It has all five fins, including a translucent pectoral fin, and elongated dorsal and caudal tail fins. They have five spines along their backs and more spines on their gill covers. These spines often contain poison.

The fish has an average length of six to ten inches. Their size can vary greatly depending on where they live, however, and the largest recorded squirrelfish was two feet long.

While many tropical reef fish hunt during the sunny daylight hours, the squirrelfish is nocturnal. This fish hides in the reef crevices and overhangs during the daytime. At night, it emerges from its hiding places to hunt for small invertebrates.

Squirrelfish hide and hunt in small groups of eight to ten fish. These fish groups are highly territorial and do not allow other fish to join them on the hunt or in their special hiding places. Squirrelfish are closely related to soldierfish, who get their name from the tight formation they use when swimming in groups.

Squirrelfish stand out for the clicking noise they make to warn each other that predators are approaching. They make this noise by flapping their fins and vibrating their swim bladders. Recent studies have found that squirrelfish can judge how threatening a predator is by the sound it makes.

The squirrelfish has a wide distribution, but it is mostly found in the tropical and subtropical waters of the Atlantic. It prefers coral and rocky reefs where it can find crevices for hiding.

In the western Atlantic, it ranges from North Carolina to Bermuda, Brazil, and the Gulf of Mexico. In the eastern Atlantic, they are found from Gabon to Angola, St. Paul’s Rocks, Ascension Island, and St. Helena. They inhabit the coral reefs off the shores of Australia, Hawaii, and other islands.

They prefer shallow reef waters no deeper than 100 feet, but they can live in offshore waters as deep as 600 feet. Their enormous eyes allow them to hunt in areas too dark for other reef fish.

Squirrelfish hide in the daylight and emerge in the evening to hunt along the reef bottoms and seagrass beds. Their diet includes plankton, shellfish larvae, small fish, shrimp, and crabs.

They are hearty eaters who prefer live food. Aquarium owners, for instance, have found that squirrelfish will eat their “cleaner shrimp” and other small fish. It’s important to know which fish they can safely share a tank with.

Their predators include dolphin fish, mutton snapper, yellowfin tuna, and frogfish. Since it prefers to stay in shallow waters, it is a favorite target of the brown noddy and sooty tern, two sea birds who inhabit reef environments.

It has two mating seasons each year. During January through March and September through November, the female lays eggs in the water. The male covers them with his sperm to fertilize them. Adult squirrelfish do not provide any parental care. The eggs hatch a few days after being fertilized.

Baby squirrelfish grow in three larval stages. At the end of the third stage, they develop the red color that is characteristic of the species. The fish’s lifespan is two to four years.

Squirrelfish are reportedly tasty, but there is no commercial or subsistence fishing trade in them. They are difficult to catch because of their venomous spines, and they offer a small amount of meat. Small, artisanal fishers fish for them using fishing lines and traps, and some local chefs use them to create local recipes.

There is an active pet trade in this species, however. They are popular aquarium choices because they are attractive, adaptable, and resistant to diseases. They require large tanks and do better with other squirrelfish for company.

The famous Chinese dish named Squirrel Fish does not use squirrelfish. It involves deboning a mandarin fish and cutting it into a shape resembling a squirrel. The chef then batters the fish and deep-fries it before adding sweet and sour sauce.

While there is no exact number, Squirrelfish are very common. They live all over the world.

The squirrelfish is listed as a species of “least concern” by the International Union for the Conservation of Nature (IUCN).

Conservationists, however, note that coral reefs are being damaged by ocean pollution and climate change. Once reefs are destroyed, they cannot recover. Losing these important ecosystems could mean the loss of many species.

Squirrelfish vs. Soldierfish: Are They the Same?

Although many people use the names interchangeably, that is not entirely accurate. Although they are closely related, they are not identical.

Both species are members of the family Holocentridae in the order Beryciformes. The family is divided into two subfamilies, Holocentrinae and Myripristanae.

Members of Myripristanae are soldierfish. They include:

Although they appear almost identical, members of Holocentridae have a sharp, angled preopercle, which is the long bone in a fish’s cheek. This bone has a sharp spine that is often poisonous. Most members of Myripristidae lack this spine.

It is a reef fish known for its bright red coloring and large eyes. The squirrelfish is a nocturnal carnivore that eats small crustaceans. It has spines that may contain poison.

How do they survive in saltwater?

Squirrelfish can sense danger by using sound to determine the size and speed of a predator. They can communicate information about danger to their fellow fish. Researchers have reported complex communication among these fish. They are also hardy and resistant to many diseases. These qualities have allowed them to thrive.

Is squirrelfish good to eat?

It is tasty, but it’s small and difficult to catch. For these reasons, it is not a major commercial or recreational catch. Some artisanal chefs have created dishes using squirrelfish, but these are not widely used.

Why is it called a squirrelfish?

Nobody seems to know why. It received that name in the 1700s.

Yes. It hunts for small fish and crustaceans at night.

What is the scientific name for squirrelfish?

It makes a high-pitched, vibrating noise. This is at high frequency and may be difficult for us to hear. Some people have said they’ve heard humming sounds from an aquarium that has squirrelfish in it.